This is a Hanged Man drawn by a four year old. She drew a whole tarot before starting school. Her name is Sophie and as you can see she's included it in the picture of the Hanged Man. Maybe she too identifies with that card.

I love that her Hanged Man has eyes of different colours - a wonderful way to express seeing things differently.

You can see all of Sophie's Tarot here.


For several days I've been wondering about making a blog dedicated to the tarot. Today I set it up. It's Caro's Tarot.

I probably won't publish there very often but I wanted a focus for the creation of my own tarot. As some of you may recall I did a few cards earlier this year including:
There were other images that I made but did not blog: 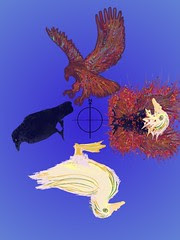 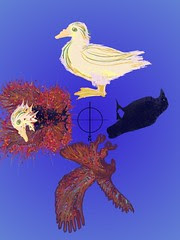 4 of birds - This card is based on 4 point medicine wheel with an eider duck in the South, a crow in the West, an eagle in the North and a phoenix in the East. 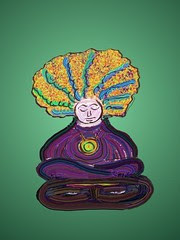 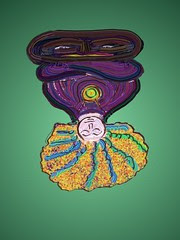 Guru - This card was to represent the danger of looking to other people for your spiritual truth. Be wary of looking to the unenlightened for enlightenment. 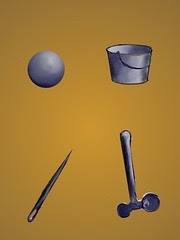 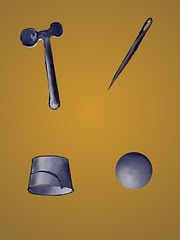 4 of Metal - this card is made up of a ball, bucket, hammer and needle. It represents different actions.

These probably won't make it into my new tarot, I don't even know what suits I'll be using yet, but they were an important step towards it. I've also no idea how long making it will take. In some ways its been in gestation since I got my first pack of tarot cards and being prepared to change it as I go along seems an important aspect of this deck's design.

In February, at the time I was making the above cards, I found a strange bag made of both halves of a coconut zippered together. Today I bought a metal tin with a zip connecting the lid to it. 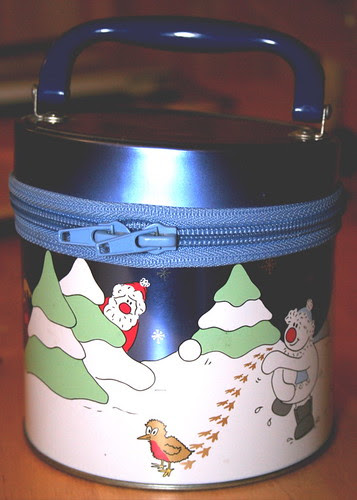 This bird looks a bit crosser than yesterday's doesn't it!

In Jamaica, they sell those coconut purses with the zips. That zippered tin is clever.

I remember when you started designing your own cards...do you have an almost complete set now?

GG - oh are the Jamaican - that's interesting thank you!

I stopped designed the cards after the ones I've shown here. There was something missing that I wasn't getting at the time. As I said I think it'll be a long job creating a whole set!

Joy Eliz - glad you like the Guru! Funny card when reversed isn't it!

I have stopped by to wish you a Happy Holiday Season, Merry Xmas to you!!

Ldahl how very kind of you! Merry Christmas to you too!

Love the cards (the guru especially) - and your new site, I just popped over there to have a look and leave a "blog warming" comment. Thanks for the link to Sophie's Tarot. How interesting to see the cards through a child's eyes.

I missed commenting on yesterday's post somehow - I love the photo you took of your new artist's mannequin, and the bird - both your drawing and the serendipitous found one.

Fun bags! The coconut one nakes me think of that song, "I've got a loverly bunch of coconuts..." :-)

I'm so glad you're continuing with the tarot project; I think it's so worthwhile and that you'd do a great deck. I remember the cards from earlier in the year...

Terr / Tinker - thanks for the blog warming comment. I am fascinated by Sophie's Tarot - she did multiple versions of some cards and some are very unusual whilst most are familiar.

I seem to have started a strange bag collection - I do love finding oddities in the charity shops!

Wandering Coyote - hello again! - thanks for the encouragement!