MMM: What changes do I witness? 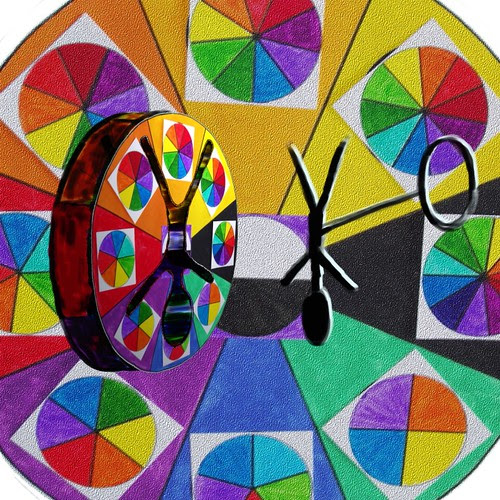 Title: No longer a square peg nor a round hole.

This piece includes a mandala I made for the summer Solstice last year using poster paints. The key has transformed from previous MMMs.

The changes I've seen are those in my response to the world.

When I was working I tried to be what I thought my employers wanted me to be. In the last 18 months that I was working I received along the way lots of thanks and all sorts of tokens of appreciation, some public, others more personal but this culminated, on my 10th anniversary of working there, in being ranked poorly... during that time I was given every reason to believe that what I was doing was more than appropriate, and valued. Then I was ranked down... I was told it would be reviewed in 6 months. I was told more about the ranking meeting than one is normally told... I was warned against complaining about this ranking. This was Hewlett Packard, at that time you could be fired for discouraging an employee from using the "Open Door Policy" yet things were such that my manager took the risk and warned me not to do it. In 6 months time I did not get a review. Nor in 7. Within 8 months I was ill again and have never returned.

Since then I've had 10 years of struggle to not be what everyone tells me someone with M.E. is like. To find a way to accept that I have it without becoming it.

One of my friends from university recently emailed and said he'd read my blog and that it was very me. That was the best compliment I could have from someone who knows me so well. I'm getting there. I don't yet recognise myself fully but I've cleared myself of lots of things that do not belong. 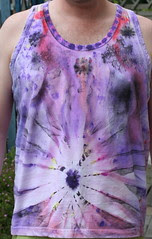 This started out as a white sleeveless vest, bought last year with the intention of dyeing it. It didn't happen then. Now enthused by Wardrobe Refashioning I'm beginning to put colour into the stash of white ready-made clothes that I've been collecting. Jim modelled the finished work for me but has declared it too flowery for him, and not really his colours either... which means I will either have to modify its paint job or alter it to fit me.

The prompt for Inspire me Thursday was "Show and Tell"

Here is what I did - though not with many pictures as I forgot about taking photos whilst wrapped up in the process:

I started with a dressmaker's dummy. It is not precious - I got it at the end of May from a charity shop and its fabric is in poor condition. I extended it as far as it would go then I covered it with a black plastic bin liner and stood it on more plastic.

Then I put the garment onto it. It was quite a loose fit despite making the dummy as big as it would go. So I tied in a couple of stones, one on the front and one on the back with elastic bands around them. I used more elastic bands to tie in further folds until the fabric was fairly taut. 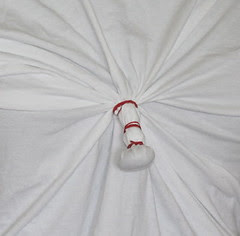 So far this is like tie dyeing (except for the dummy!).

You can see that the folds are creating a starburst or petal-effect in the material.

I then started playing with paints. I worked from lighter to darker and the first day's were all done wet and watery. The paints ran, and if they didn't run I sprayed them with water to make them run. I wanted them to spread and seep a little through the folds in the fabric which they did quite well.

I used Stewart Gill's Colourise fabric paints which are quite thick so needed water adding to make this happen. I painted some on around the tied stones and I painted thickly in places to see what that was like too. This was the first time I'd used this brand of paints.

I left it overnight to dry. Next day it was dry enough to work with non-runny techniques.

I used black. First of all I experimented with lightly rolling the paint onto the fabric with a small sponge roller. I noticed that the areas where the dummy was textured were being picked up and creating edges.

I then tried using some stamps to add texture. I put them behind the fabric and rollered over them. Although this worked reasonably well I'd have preferred the final effect if I'd skipped this stage.

I did some final rolling to ensure the folds were well marked.

Then I left it to dry, removed the elastic bands and stones then heat set it in the tumble drier.

I washed it by hand to find out how much dye would come out. The water was noticeably darkened but the fabric stayed painted so this must have been excess.

The stones bagged the fabric a lot and there is still a slight bagging where they had been, but that may well recover after another wash. And I like the way the folds go around the whole body creating a piece that could not have been done as separate pieces of material.

But I'm far less happy about the way the top part turned out. It just doesn't work with the rest.

And of course its also turned out that I probably shouldn't have used pinks and purples in a flowery pattern for Jim... 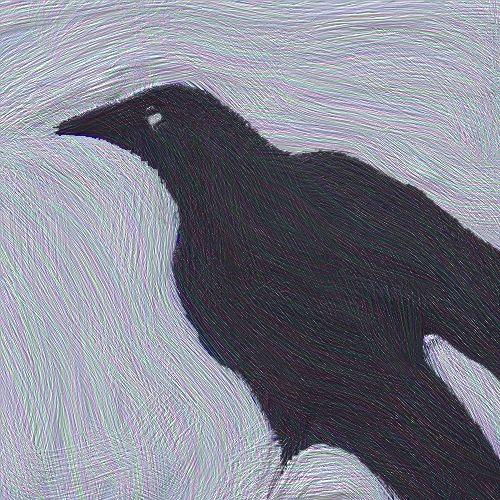 "If you could have ANY mystery unveiled for you, what would it be? It can be cosmic, personal, political, whatever. What deep unanswered or even unanswerable question would you want to have revealed for your eyes only? What do you dearly want to KNOW? Also, if you want, what would your prefer never to know? What would best remain a mystery?"

One of the mysteries of my life is how anyone remembers poems, or anything else word for word. Over the years I've tried, and I've used all sort of tricks and techniques but somehow my whole brain just revolts at the idea of committing anyone words to memory - even my own... after all the words of yesterday are the words of another being, not the person I am today, this hour, this minute, this second, now.

Macavity's a Mystery Cat: he's called the Hidden Paw -
For he's the master criminal who can defy the Law.
He's the bafflement of Scotland Yard, the Flying Squad's despair:
For when they reach the scene of crime - Macavity's not there!

And no I haven't just recalled it but found it on the web... 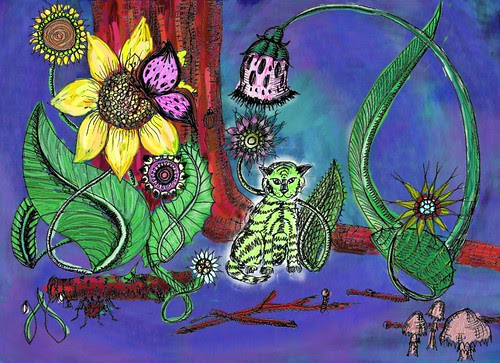 In this weeks trawl through pictures drawn in my youth I found this: 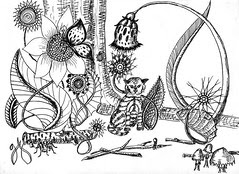 I think it was an illustration for "Tiger, tiger burning bright, In the forests of the night." I must have had a thing about tigers that I've now completely forgotten. And most of them were odd colours, I was especially keen on green cats (which might have been why I had this dream about a Chartreuse Cat), so in colouring this in I went for the sort of colours I might have used at the time. Though I suspect the Caroline who painted these orchids might have used more colours....
Posted by Caroline at 6/09/2006 03:43:00 pm 24 comments: 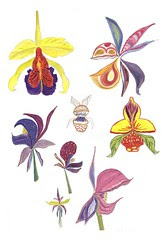 Orchids
Originally uploaded by Caro's Lines.
Another picture from my past - these are a few of the carefully painted and rather imaginative orchids from my teens. At the time I'd only seen orchids in books or the native British ones which are not like this at all.

There were quite a few with colour schemes that I really didn't want to put on my blog!

Something else I used to draw all the time but are now largely absent from my pictures are cats and elephants. 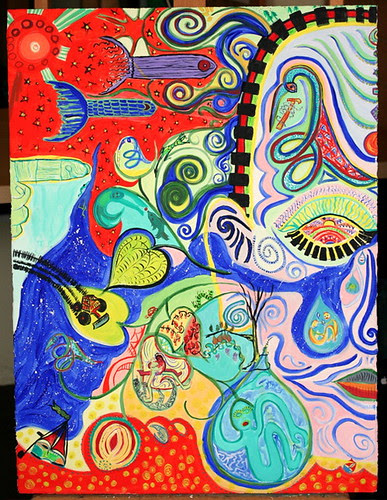 Painted in 1996 using acrylics on paper. Inspired by "Life, Paint and Passion"
by Michele Cassou


This book encouraged me to paint using a small paint brush on a large sheet of paper and to let the painting emerge without knowing what was going to go where.

I exhibited several of them but, considering them very personal, I marked them all as not for sale. Someone I've known for a long time (since 1984 I think) did express an interest in this one but I wouldn't sell at the time. I was too attached to it. Ironic given the Budhha's teachings! But then I'm not a Buddhist...

On Sunday evening I was writing in my journal, wondering about doing some more pictures in this manner, inspired by Carla's recent horse picture which she described as a result of the challenge to "create art spontaneously, directed only by the spirit within". I then recalled this picture and thought I really ought to give it to my friend. I wrote in my journal that I would, but he is out of town at the moment, not due back until September. The last time I'd heard from him by email was an invitation to his 40th birthday do in January this year, the time before that was in 2003 so it was a lovley synchronicity that he wrote on Monday to let me know that his wife is pregnant! I have of course replied and offered him this picture if he is still interested in it. 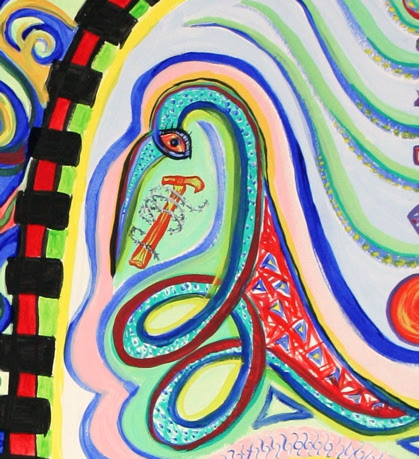 Another synchronicity today was reading Wandering Coyote's posting mentioning homeless people which had brought up the issue of how people get to be in that situation and in the comments someone had mentioned the drug and drink problems that tend to go with it.

I then turned on radio 4 and heard On the Ropes with John Humphrys talking to Clarissa Dickson-Wright about "alcoholism, domestic violence and how to spend more than a £1 million". She had an abusive alcoholic father and had herself pretty much avoided alcohol until she found her mother dead. She went from being a successful sober member of the bar to twice bankrupt (thus chucking away her inheritance of more than £1 million). At one point she mentioned that she seriously considered life on the streets. She went on to become one of the "Two Fat Ladies" who went around on motor bikes and cooked up a storm.
It was an interesting interview and will be available to listen to at the bbc 4 website for the next week.

One of the things that she mentioned was that she explained alcoholism as being caused by having an endorphinal gland that is trigged by alcohol, and once triggered sets off a "heroin-like craving for alcohol". Well if that's true its hardly surprising that there are so many alcholics - its pretty hard to avoid having the odd drink in this society. Most people with that particular genetic trait are likely to have it triggered. 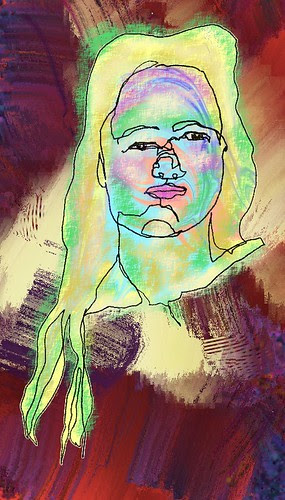 This started out as a blind contour drawing then scanned in and played with digitally.
Not sure I like the result much but it was fun to do.