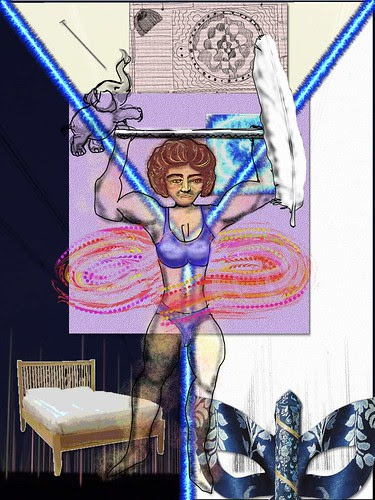 
The week has been an odd mixture - which must account for the strange assemblage of images above.

I've put most of my creative energy into Christmas cards yet I've not used any here; I have included the long pin that keeps the glue squirtable!

Illustration Friday's topic was MASK and I've included one but not the one I used as my submission. This one is made from a butterfly I cut out in the first week but didn't show. I've included it because yesterday one of the characters local to the Gloucester Road took it upon himself to wear a beautiful blue butterfly mask and do a little song and dance to entertain the rest of us standing in the queue at the post office. He complained that in a Mediterranean country he'd have had people shouting, clapping and joining in rather than the embarrassed silence that greeted this display. The woman in the queue in front of me turned to me and said "No they wouldn't!".

Someone somewhere said something about not being able to balance an elephant with a feather... and balance seems to be hard to find...

In the lower left background I've used an image a friend asked for this week. Its one Jim took of a field of fluorescent light tubes in 2004. An artist had installed these by putting lines of these with one end into the ground under power lines. We all saw the glow of the tubes becoming more and more obvious as the sunlight faded.

I've also added in the Y of crackling lines in honour of that field.

Over it is a picture of a bed we like in a shop called Dusk 'Til Dawn.

I've included a simple Squart within the collage. Ian has been playing with them and I enjoyed making the one I blogged. I also enjoyed playing with Joy Eliz's style and the smaller square was meant to contain one of her swirls but it didn't come out quite the way I intended...

At the very top of the image is a plan view of an ideal entrance hall. One of the tasks in the AW this week is to begin to picture one's ideal living environment. I only got as far as the hall. And though you can't see it here I dedicated a large piece of wall space to a picture from Andrea - not one I own - this is an ideal environment without financial constraints...

But what about this peculiar strong-person I hear you asking! Okay that is the result of me struggling with the concept of strong and feminine.

And I haven't included anything to represent the plumbing that is currently going on around me... I'm not finding it easy to cope with the house being invaded by a plumber, despite the fact that he is very pleasant, polite etc and appears competent... its just having someone here banging about, pulling things apart, squawking, turning off the water and putting in a new boiler, shower and 3 radiators... he said it will take four and a half days and we are only half way through the second day...

Update: If you are on a beta-blogger blog I may have tried to comment today and failed... sorry but it won't even accept my comments as from anonymous when that's one of the options!
Posted by Caroline at 12/12/2006 01:49:00 pm

Email ThisBlogThis!Share to TwitterShare to FacebookShare to Pinterest
Labels: Elephant

well it's a long shot but maybe the feather is from a white hawk... 'hawk white' being a well-known brand of pipe jointing paste used by plumbers.

Ian - I think you have found the missing link - thank you!

Andrea - I'm just hoping its done in time for Christmas!

Wow, getting your heating changed in the cold weather! You must be brave, Caro.

The collage has so much texture and interest - and symbology of course. I love that bed.
I'm curious about the butterfly man - what sort of song did he sing in his performance? Was he from a Mediterranean country? I have all sorts of images going through my mind now!
Good luck with the plumbing, I hope he was overestimating the time, rather than the opposite.
I left you a reply on my blog - you were actually first in mind, but I thought you'd done it already! But perhaps you'd rather not, anyway?
xo

Tinker - I want the bed... I wonder if we'll be getting it... He's black - not sure if he's Afro-Carribean but might be and he is the most amazing show-off - he dresses up in tremendous outfits - often women's - and carries them off with tremendous style. His song was made up on the spot.

Beta seems less fiddly for those who have gmail accounts.Coincidence? Slick advertising?

I like that butterfly at the bottom right hand side...I am obsessed with them right now, I want to paint them on my recycled factory bags. I'm using embrodery patterns as I can't draw!

Dinahmow - my gmail account doesn't seem to be helping at all!

GG - Embroidery patterns are a good source of images - I'm not sure I can draw either but that doesn't stop me!

The Tart - Hi Tart long time no see... and its true I've not visited you either sorry! Must remedy that soon.

Beta blogger is a beast - the first comment it allowed through in days recently was when I just had yet another go and wrote ???... so not actually saying anything...