A doodle done in Painter IX

This week in the artist's way is all about allowing in a feeling of luxury, being pampered and abundant. This does not mean spending huge amounts of money and in fact one of the activities for the week is keeping track of what you've spent (something I totally forgot when I went to the shops earlier...). The idea is that we often splurge on things that have little value to us and deny ourselves inexpensive luxuries that would mean more to us. 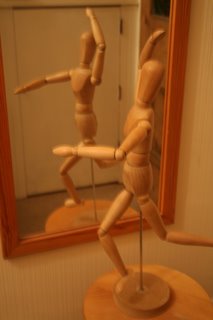 What came up for me when I considered this was that I really wanted an artist's wooden poseable doll - I used to have one but it got irreparably broken - and that one was just a cheap one. So today I looked for them on the web and wondered whether there were any ordinary dolls that were really poseable. I went out and looked in our local toy shop and charity shops. The most poseable girl doll appears to a Barbie which wasn't anything like poseable enough and the most poseable boy doll some form of action man which was much more poseable but came with very odd things attached to it. So I eventually went to the art shop and asked if he had any of the wooden artist's dolls and there was just one, reduced from over £21 to £10. And it is even more luxurious to be giving myself this just because rather than holding it back until Christmas.

I also found a bag in a charity shop that was just the right sort of size and design to carry art materials and sketchbooks around in. It happens to be orange. Some time ago Reluctant Nomad mentioned that Orange was coming up synchronously for him and its culminated in his getting a job in Holland that starts in the new year. 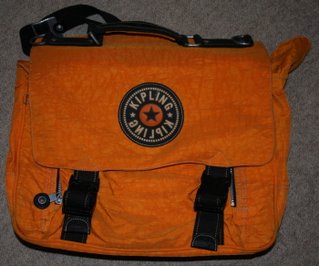 When I got home I noticed there was label in the bag. I've tried to take a photo of it. Maybe you can see that it used to belong to a Dutch person who gives their country as Nederland:

And finally here is a little bird that I found on the pavement (=side-walk) a couple of days ago: 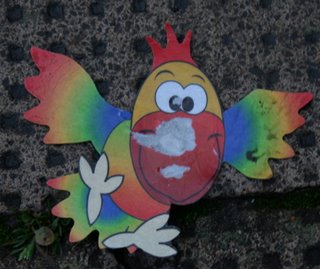 Merry Christmas to you too Caroline! The little bird cracks me up--I love finding random goofy things and taking pics of 'em. Good job on your finds and purchases as well. These are things you'll put to good use and help foster your creativity and abilities. The wealth of work you produce is the resulting luxury. In the meantime, I'll be really sad if you don't post that little line doodle above at the Camel Exchange. I can see a great potential for collaboration, birds perhaps?

Steve - no need to be sad I have posted it on camel for you - thanks for the suggestion! Thanks for the encouragement.

You have an uncanny gift for celebrating the minutiae, Caroline. I love that.

I love the colors in all your images.

I read somewhere that orange is the color this holiday season even the color for lipstick.

Merry Christmas to you, too and your loveones.

Yay! Happy finds & doodles! A lovely, cheerful post and I love that bag, especially! Congrats on all your bargains & finds, Caroline, and Thanks for your comments on my blog. Very much appreciated. I love the colour & Joy in this post, and hope that your Christmas & New Year are filled with both.
Hugs, Suze x

Andrea - thank you - its part of the texture of life.

Isay - I won't be wearing orange lipstick so I guess this is the nearest I'll be getting to fashionable this Christmas!! Thank you Isay.

Suzie Q - Glad to have provided a bright spot for you - I do hope you find more! Hugs to you too.

Caro, you're so clever with Painter!
And I love the little lost bird! Mustn't have been able to fly South with the flock!

Merry happy Christmas to you too Caro! Synchronicities? Well you've already seen my orange drink dispenser rushing in on the 'room.

Cream - thank you - I like Painter and I know how good you are with it too!

Johnnynorms - That's true... and that lovely orange bag has run away... Jim saw it and they flitted off together for a lunch meeting!

i'm thinking a bun dance is a tango. ;o)

How interesting about that orange bag!!

Merry Christmas to you too.

Ian - how wonderfully orange of you!

I was here this morning and got disconnected thanks to bad ISP. grrr.

That poseable doll reminds me of the Handy Bendy Ghandi doll my brother [in England] keeps talking about, his little girl has one, and guess WHO has the most fun with it! Yes, the daddy.

Is the pavement art permanent? I hope so.

GG - I'll have to look out for one of those dolls thanks - could be just what I need!
The pavement art wasn't permanent - it was just a little piece of rubbish that I noticed... fun wasn't it!