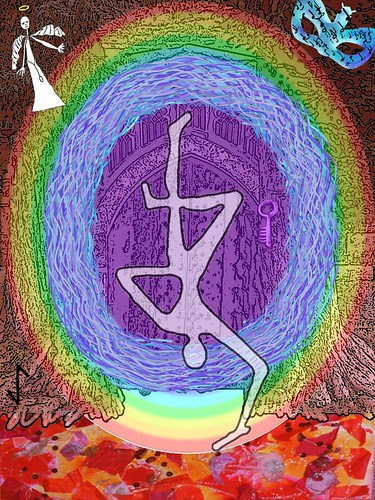 This week has been dominated for me by The Hanged Woman about whom I blogged at length on Sunday.

In the book this week is about removing the limits we place on what its possible to ask for and to receive.

Its also about listening. Listening to the whispers of intuition, to the universe especially via synchronicities, to one's innermost deepest wishes, needs, fears.

And its about taking time out - the need an artist has for downtime - something that was emphasized to me by having a plumber around making it difficult to rest - on the Wednesday I snoozed on the settee in the afternoon and he only woke me up three times to tell or ask about things!

On Sunday night, in bed, I had one of those thoughts that has to be noted on paper before sleep wipes the memory away. I dutifully put the light on and wrote it down.

It was about an exercise that helps me to ground anger, connect to spirit despite grief and ground fear. I also got the need to retest the second half of the Artist's Way now, next week - Abundance - would go ahead as planned but with Christmas in it I'd be unlikely to have time to retest it then.

Next morning I did my daily tarot reading.

My standard short reading consists of three cards - the first is the main focus and the other two expand on it.

The main focus was 9 of Stones reversed. I looked in the book and discovered that I'd penciled in "Test (or retest) Artist Way type programme". The second card was about anger and the third about suppressed / denied emotions.

This was so specific and so in agreement with what I'd received drifting before sleep the night before that I went round yesterday in a sort of glow. It does feel good to know that such messages are getting through!

This collage contains, besides the hanged woman:
There have been plenty of synchronicities this week. One of the neatest was yesterday when the Plumbing company rang to say that they'd be sending an engineer out today. I was just in the middle of a 15 minute break and reading a little from "M is for Malice". This is what came just after the phone call:

" Oh. Guy. Good, it's you. I was just wondering if you were here yet. The furnace over at the church has been acting up again. First it clicks on, then it clicks off. On then off."

Our new boiler (that's British for furnace) was fitted last week but only reliably worked on partial power, it was acting up - it wouldn't work on max... Max, of course, was the name of last week's plumber...

It wasn't doing the clicking on and off - that's what the old boiler had been up to just before we replaced it.

And - yippee - today's plumber seems to have fixed it! Our old boiler was indeed very old and much lower powered; this one is astounding - it is actually capable of making the house warm not to mention heating water on demand!

Have you noticed any neat synchronicities recently?

Update: For anyone who suffers from M.E. its turns out that dark chocolate can help - good news for Christmas. Of course this will only be true if you don't have a bad reaction to chocolate as I did (migraines) until I had the appropriate HK allergy corrections...
Posted by Caroline at 12/19/2006 08:18:00 pm

Joy Eliz - did you mean to post that thrice or is it an example of clicking on and off?

The only synchronicity I've noticed lately is that you and I are both having plumbing and repairs and what-not going on at the same time - though you're ahead of me with actually having the new furnace/boiler - we have to get the roof repaired first, but before that we have to get the tree limbs that fell completely removed - oh my! There's a synchronicity that just popped out at me - your hanged woman and the half-broken, therefore hanging treelimbs! I still don't know what the hanged woman signifies though - maybe I'm supposed to go hunt my tarot cards out, I haven't looked at them in ages!
If I don't get back around soon - have a merry Christmas - though I hope to at least do this late at night peeking at my favorites that I'm doing right now. xo

I forgot to say that I love the colors in your collage - it reminds me of a stained glass window - lovely! And, of course, the imagery is all meaningful to you, which conveys a sort of mystic power to it, too. In short - it's very cool!

That hanged woman is the best of all. She's an acid trip!

When looking at your page, my eye glanced over the little Reluctant Nomad picture and I saw these letters: 'eluctant Nom o'. My head interpreted this as Reluctant Homo. :-)

is that why her legs are forming the shape of an archer drawing a bow? i thought it might have been an inverted tree pose in earlier versions.

her profile imitates the mask in the picture. :o)

Tinker - there is a synchronicity between us that I've not pointed out - all these detective books I seem to be determined to read at the moment are set in Santa Theresa a fictional town based on Santa Barbara - so much closer to your environment than mine!

I was thinking of it as a memory revisit to the days when I visited California on business (the stories are set in the 80s) but now I'm thinking that its probably a prompt to visit again. Maybe I'd better get my passport renewed...

And thanks for the comments on the collage - your angel reminded me of a stained glass window but I hadn't seen that this might too - thank you!

Ian - a synchronicity needs to be noticed, experienced - noticing them makes them more and more frequent.

Its like picking wild strawberries - have you ever been to Miserden Park? As a child I remember the difference between the number of strawberries once I'd got my eye in and before. It didn't matter that they were there before; if I didn't see them, I couldn't TASTE them.

Some synchronicities are only grasped in retrospect but that's part of learning to see them.

Reluctant Nomad - she's on a better trip than that I think - this one doesn't have serious problems with flashbacks, lost brain cells or hangovers!

And at first I read what you'd just written as Reluctant Hero.

Ian again - do you see her legs as forming a bow - I kept on thinking I might but then it would go again - I can see that if I used a slantier tucked leg position she'd include the rune for yew in her position.

I didn't see the mask shape at all - thank you for mentioning it!!!

I love this image! The colours are great.

Yikes about that chocolate thing & your migraines.

Have you ever done your Runes?

Hi Tart - thank you - luckily since I had my allergy corrections I can eat it as often as I like... but it didn't immediately cure my M.E....

I've cast Runes what do you do with them?

i like the texture and of course the rainbow colora....

Isay - thanks I liked the texture too!