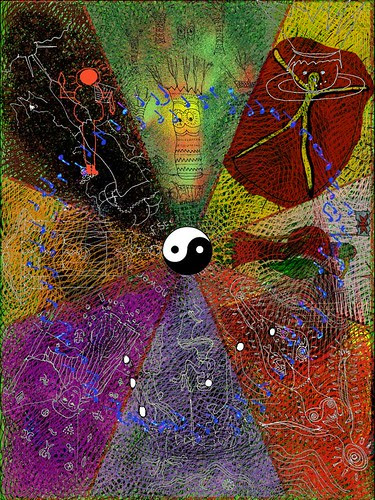 In the book this week is about using anger and defusing shame.

It forgot to mention the weather... on Thursday I happily put up a picture boldly called "Singing up a Storm" I was thinking of it as musical... but the storm hit Bristol fiercely at the weekend... then there was Blogger's strange claim with the "I Power Blogger" icon turning up unexpectedly in today's weather for Santa... and my blog completely disappearing throughout most of today until I republished it. As Tinker commented it wasn't visible through those Blogger clouds. Now I'm wondering about moving to typepad as a result of this.

Other things that have happened include:

I could go on (even more) but you get the picture. And just in case the world is always like this for you, it really isn't normal for me.

Here are a couple of details from the murk: 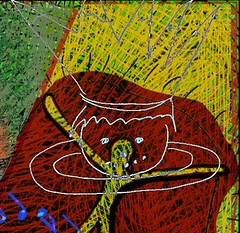 This is the Mountain King Pudding. He turned up in a morning doodle. His crown is made of mountains.

And this one is of a Doorway between the worlds, I rotated it 90 degrees here: 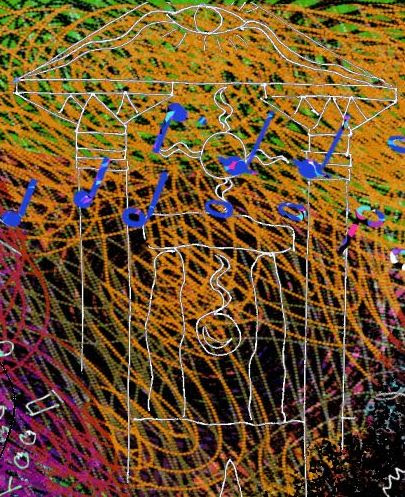 This week I have again been working with tarot images, one per day. This morning I got my first duplicate since I started - the 6 of trees - the card I'd pulled last Tuesday in answer to the question: "Who am I?" But I'd decided then that what it had really told me was who I was going to be. Now its come up again and I'm happy to own it this time.

I've arranged the cards in a medicine wheel. This is a form that I've used before for doing major readings. To read it you start in the bottom right hand corner, the South East.

SE - the direction of the ancestors - Card: 21 The World - Shining Woman

S - the direction of the inner child - Card: Place of Trees

SW - the direction of self-image - Card: Knower of Birds

This is the card of the diviner - one who can divine the meaning of what happens, with or without a system like the tarot to provide the meanings.

This is the card on the front of the book that goes with these cards.

The image is of a doorway between other worlds. It indicates stability.

NW - the direction of karma - Card: Ace of Stones

Connecting many levels of life and being well-anchored in ordinary things.

The card that I thought I wasn't ready for last week.

This is the card of the person who uses the Tarot confidently. (It does mean more than that but given the other cards that's how I'm interpreting it here - tarot readings are always context dependent.)

The Pudding and a Power woman. The message is to get in shape and relax more!

E - the direction of Fire and Spirit - Card: Gift of Birds

If you are still with me after all that - thank you!

So everything is full-up? Perhaps a Crystal Quartz to clear out the excess?
Sending good vibes your way:)

love the image; do you delve into the mystical and magical? I love the "doorway" analogy, wonderful!

are you worn out with all the extra stuff you had to recently endure?

until next time,
sage

"Morkey". caroline, you are being way gtoo humble. this is beautiful to say the least. Multilayered and complex. Love it!

Have you considered a Canon IXUS. Mine is an older model but it is still good and easliy fits into the pocket. It has a viewfinder which is not often a feature, so its easy to use in bright sunlight.

no, i like the style of it, not murky!

yes, I wondered what happened to your blog today. yeah, ixus are just the best! i use mine more than the SLR for the very reason you say - too much to lump around on speculative trips.

I like the guy in the top part. He's cute. Hang in there!

My God -- months of silence and then lines and lines of Caro-words. :) As for the power collage I know you're doing them just to torment me. Intricately enigmatic and quirky and beautiful as always.

I hope you don't mind...and of course it's optional...but I tagged you:)

Wow, I love it murky or no! My favourite elements are the owl forest, the bird with a flag, and the Knower, which came out as Nower, which I thought was deliberate at first! Then I wondered if it was Noah. Shows what I know..

Joy Eliz 1. Thanks for the good vibes. I'm pretty sure what I needed was to be better grounded, especially when angry, grieving or afraid. I've come up with an energy exercise that suits me - lets hope it keeps me and everything around me sound!

Sage - glad you like the image - I'm still not able to read your blog by the way. Delving into the mystical and magical? I don't get much choice about it - the only way I've found to get healthier (I've had M.E. on and off since June 1992) is to get weirder and weirder (according to what I'd previously considered normal). And right now I'm feeling fantastic - I think I have managed to ground the energy that needed grounding and that feels such a relief.

Steve - thank you - but are you expecting me, an English woman by birth and upbringing to say I've done something good? However I do really appreciate your saying it!

Davem - we'd gone into the shop saying we were interested in a Canon IXUS... thanks for giving it another vote... I suspect it is what I ought to get.

Ian - not murky? Thank you! And a nother vote for the Ixus - okay I really will go and look at them and not whatever the salesman is trying to fob me off with! I would so like a little camera that was in my pocket or bag - there when I need it but didn't realise I would.

Tony Larocca - is that the tree man with big eyes? I am hanging on and smiling too!

Andrea - was there a bit of a torrent of words there... I didn't say half of what I might've either ;-) And how come my collage torments you? Is this your muse telling you to do more collage???? What about printing out colour copies of some of your paintings and cutting them up and reassembling them then painting over them some more - sounds like lots of fun to me!

Johnnynorms - hey you've gone grey now - are you cycling through a palette of emotional colours? The Knower cards are a feature of this particular tarot and I too often think of them as Noahs. But being a NOWer sounds even more relevant to me - thank you!

I know everyone thinks I can be a bit mad about word veri but when I posted that comment it came up as:

which immediately sent me to look at another of Julia Cameron's books (despite this being the week of Reading Deprivation!), The Vein of Gold, and I opened it on a basic tool - Clusters - Clusters are groups of people who nurture the inner artist - I've a feeling you are all part of the cluster to which I belong - THANK YOU!

Oh my, you do amazing work, I am happy Andrea posted her link to your site! I too am left awe struck and inspired... will return for more.

Jessica - thank you very much!

A perfect fit for Christmas and the solstice. Beautiful work.