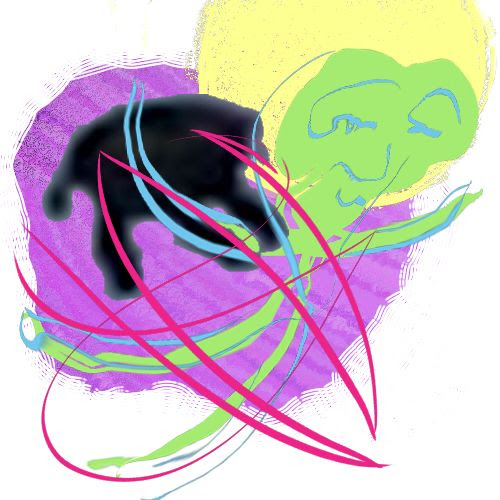 The UFO from Thursday has been identified as Schrödinger's cat. Here it is trying to pull a little green alien into a violent hole. Notice how the violent hole has a hazy edge representing an uncertain event horizon - especially for the poor little alien.

Ian mentioned in the comments to that photo an interview with Nick Pope, a British ex-MOD man, who'd been put in charge of checking out UFO sightings.
Listening to the interview there are some important clues:
From which I conclude that of all the things he's done in the last 21 years the one that is the biggest potential money spinner is the UFO one, and may also be the only one he'd get clearance to write about. Of course I can't be certain.

was it only 3 years? the way he was talking I thought he'd been at it for life! yeah, i suspected he had a book out or something.
have you noticed that there's not so many crop circles thesedays - and wilts/gloucs was once the crop circle capital of the world! and what about that Presley? not Elvis, but Reg Presley - the guy who sang ''Wild Thing, you make my heart sing...''. He's from that area and obsessed about UFOs. Nuts about them. :o)

Ian - he didn't mention a book but maybe he's after a publisher - I've never kept track of crop circles being too aware that young farmers probably rather enjoyed making them...

'Hoover' over us -- very funny. Is that because we're a filthy, untidy species?

Andrea - glad you liked that - it could be that we are tiny specs of fluff compared to them...

Love this! I'm so glad Schrodinger's cat escaped that paradoxical box - I've been worried about him for years. Always wondered how Schrodinger got away with such blatant animal abuse. I'm sure the cat's better off now with the aliens.
@_@

Tinker - me too - I was always worrying about that cat when we did physics!