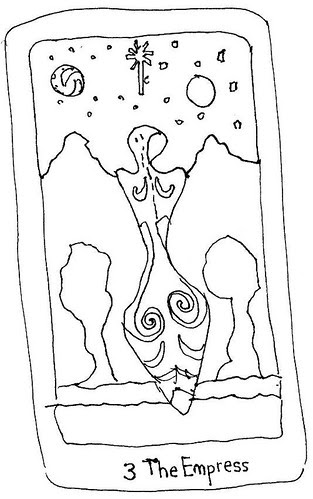 Whilst I drew this copy (I did it on its side so as not to be copying it as a symbol but seeing its shapes) I recalled one of the things that had upset my early identity as an artist.

I used to draw pictures to send to my Gran. My sister, who is 6 years younger, would "copy" my pictures and my mother sent both off to Gran.

My mother mentioned to me that my sister's pictures were much better than mine, though according to my sister she never mentioned that to her; this ate away at me for years.

My mother was a frustrated artist - she'd been to art school and worked as an artist for a few years but found it hard to make enough money and moved into other work before she'd even met my father.

Today as I copied someone else's art (Rachel Pollack's, the artist and tarot interpreter who invented the Shining Tribe Tarot) I realised that my sister had an advantage in copying my work that I'd not thought of before in this context - I'd been drawing from my imagination but she was doing a still life.

I've often preferred the marks I make when working from life (still or not) but am drawn over and over to work with the stuff of my imagination. And as I drew I was annoyed with my mother for not having seen this aspect of the situation and mentioned it as a reason for my sister's pictures being better than mine. (Now I doubt she'd thought of it at all - she just thought it was my sister's young naive style that was so endearing and of course that was true too.)

In the past I have experimented with redrawing my own work once sketched in a search for these marks. But it didn't work - though I will try again.

However it has worked for me in this copy of someone else's work. I much prefer my version (shown here) to the image on the card! This deck is my favourite ever set of cards so this is not meant as disrespect to them. Its to do with making my own marks and expressing myself in this image drawn from our ancestor's art.

Having drawn the card at "random" from the pack to draw it on paper I thought, after copying it and thinking of all this about my sister and my mother, that I should also check what the book says about The Empress.

As with all the cards in this pack the images are drawn from old artifacts and images. This one is based on a Romanian vase painting from over 4,500 years ago. The Mountains on either side of her are meant to be seen as wings and then she becomes a "Winged Artemis", which sounds like another angel reference to me, this time well outside Christianity.

The Empress represents the concept of Mother, and the star above her is that of Daughter. The mythical Demeter and her daughter Persephone are mentioned, and in reference to Persephone's separation from her mother and the outcome of the myth, this card also symbolises the need for separation from our parents before we can "return" to them in some sense.

Since my mother died a few years ago its her memory that I'm making peace with. My mother and the rest of my female line.

I rather like this way of working with the tarot.

This is tonight's moon that was positioned well for me to take with a tripod without leaving the warmth of the house. 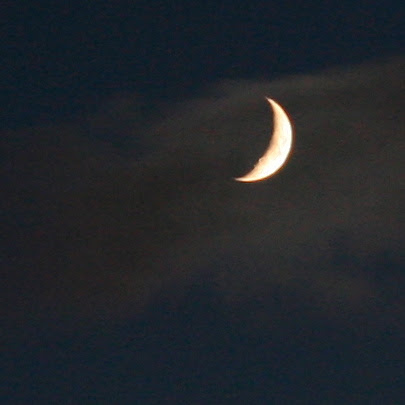 According to MoonDock the moon is nearly 5 days through its cycle; daughter stage.

And I've just noticed I was warbling along on a similar theme this time last year about my mother's influence on me as an artist. And what's more the picture that inspired that posting shows a little mouse playing drums to which a stalk of wheat is dancing.

Wheat is one of Demeter's symbols. 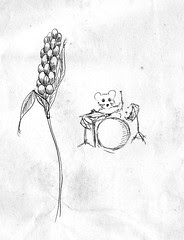 Interesting synchronicities - which continue on this side of the pond as well, since late last night my Enchanted Tarot deck (which has been MIA for quite some time), finally came to light, when I was looking for something else. The second one, is that I just came to this post, after leaving someone else's post announcing that their mother has just died this past week (which, of course, made me think of my own mother who died 8 years ago). Now your post - sometimes I wonder if I read too much into these things, but they do make me wonder...
Yet another thought when reading this (which may or may not be relevant to you, but I'm sharing it in hopes that it may help) - is that as a mother of grown daughters, I'm constantly amazed at the random phrases I've thoughtlessly uttered or been interrupted before I can finish the qualifying part of the sentence, that they have immediately taken to heart. The power of motherly words - yikes! I try to remind myself more and more often now to mind my words, lest they be taken in some other way...but I thank you for reminding me once again to mind what I say. Which I really shouldn't need reminding of, since my own mother and I had some similar misunderstandings - which in later years she did thankfully explain to me. But oh, the years of angst that went before that...

I do understand what you mean about the difference between drawing from imagination versus drawing from a still-life or model. Each way has its own attraction and drawbacks. I think it may be possible your sister enjoyed a certain advantage in having you think up the image and work out the composition beforehand, for her to copy.

For the record, I think all of your artwork that I've seen here, is wonderful - such as this one. I really like the interesting shapes on your drawn tarot card. They have a sense of mysterious power. You are an awesome artist, Caroline.

MP - thanks - your recent moon photo was one that encouraged me to have another go.

I think as a daughter who has grown that you need not be so very careful.

Daughters hear through their own filters and its not necessarily what was said or meant. When I talk to my sister about our childhood we have totally different events that we recall and our slant on those we both remember is very different.

This is part of making peace with my mother's memory. I know she loved me. I know she wanted me. The rest was the noise created by and empressed upon our heads.

Hey, Caroline. I like your version better, too. It has a fluid kind of movement.

Thank you for the great comments about the Shining Tribe. Even without that I enjoyed looking at your blog.
Rachel

Rachel - hello - thanks for visiting. Thanks also for the compliment. I've got plenty of other decks but since buying the Shining Tribe a year ago the rest have been gathering dust - your cards really speak to me - thank you!

My mum gave up her place at art college, because she fell pregnant with me. Sometimes I feel that I am carrying the remains of her dreams ... anyway - didn't want to get all deep. But this post made me think and I thank you for that.
Cx

Did your mother go back to making art?

I've sometimes felt that I'm carrying the dreams of all my ancestors / past lives - which makes for a conflicting bunch of motives!

No she never went back to it and I think that it added a bitterness to her. Sometimes when you don't follow your own dreams it is difficult to accept others taking the journey.
I am with you - I am a consequence of many other failed dreams. It's quite hard to ignore the negative voices.
Deep again - sorry :-)

You are right - there's nothing like a failed artist (or whatever) to dampen hopes with wet blankets!

Deep is fine - sometimes plumbing depths brings up hidden treasures - other times it just makes us tired of course...

we are looking at the same moon!

Isay - its great isn't it that we are!

love all the interweaving symbols and stories you've been expressing here. the tarot work you're doing is fascinating.

Thanks Kat - I've been reading tarot for years and years so its great to find a way to work differently with it.