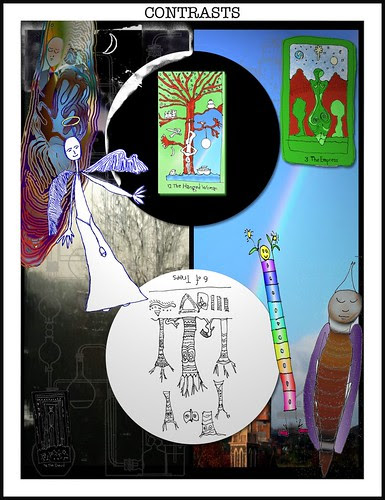 A mixed media collage reviewing my second week of revisiting the artist way.


This week was a hard one for me. I found myself with loads of ideas about identity but whenever I attempted to express them they changed! It was like trying to pin down a lump of jelly (jello) and pretend it was a piece of granite - just not realistic and rather messy.

So I alternated between really paying attention to what was going on around me and working away in my journal.

There is a devil hidden in the detail: 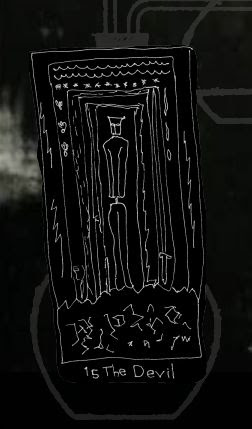 Exploring one's dark side is never easy - the reason we leave it unilluminated is because we are pretending to ourselves that it isn't there. And some of it seems to be pre-language which means attempting to psychoanalyse it is a waste of time - much better to get in contact with the feelings and unblock them.

And then there were a whole load more angel synchronicities: 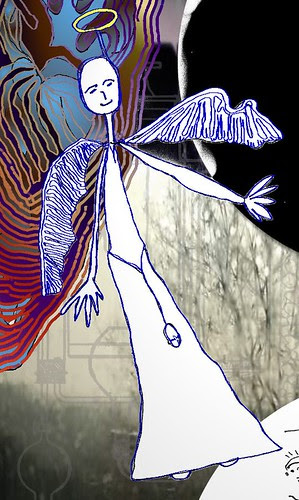 I drew this angel as a morning doodle in my journal. Can you see the connection from its halo to its head? When this angel is resting the halo goes off like a neon sign saying closed for business.

Another reason for choosing these two as details is that this week I sold a book and then 3 hours later got a message saying that it had been bought in error. It was called "Heaven and Earth". By a great stroke of luck I hadn't posted it yet (normally, as the order came in before noon, it would have already been on its way).

I also added in the rainbow chest of drawers as it was one of my favourite doodles from this week.

I worked a lot with the Shining Tribe Tarot this week (see my earlier post about the Empress). I drew a card and made a drawing of it each morning after that. That is where the other tarot cards in this image come from.

This morning's was the 6 of Trees in reply to "Who am I?" but I felt that it was really an answer to who will I be soon, so I put it upside down on the 2 of coins ready to be flipped upright when activated.

I've been procrastinating...I need to sit and do some 'identity' searching, myself. I write it all, let my mind flow through my hand and pen. I tend to have to fight procrastination.

Speaking of identity...Parrot Tom looks perfect for your Guyana link.

GG - I used to write it all but what I've been struggling with this time around just wouldn't go into words.

The artist's way is a lot of fun. I have to burn my morning pages before I'm elected world emperor...

I like the images - both dark and light. Exploring our shadowside is never an easy task, but at least you're making wonderful art from it.
Hope this helps you get things ironed out :)
(I had to laugh when I saw what Ian had made of you on the Camel Exchange!)

Tony - I thought you were already emperor...

Tinker - Thanks - I've sorted out some stuff that I really had buried and it feels good... dredging of that not conscious stream bed is still in progress... and yes, Ian must have thought I needed to straighten a few things out, too...but did you see what make it was - a Morphi-Richards making a play on Morphing and Morphy-Richards... but the odd thing is I was born a Richards...

I love your collages. I know they're your expressions but when I look at them I focus on what grabs my attention. They are very healing!

Fantastic work, Caroline! I love all the symbols - angels, butterflies, trees, rainbows - if this is your dark side, then your light must be blinding!
I've had the book of the Artist's Way for quite some time now, but am yet to start my own journey through it. Maybe that'll be a good way to start the new year...
Lovely post, and yes, go for that Pro Account as a present. I was really pleased with mine! :)

Joy Eliz - glad they have something in them for you too! I'd love to make art that was actively healing for others (but first I'm sorting myself out!)

Suzie Q - thank you - it really is worth going through the Artist's Way, its a book that I can honestly say changed my life! Having said that, the first time through it helps to have support - I belonged to an on-line group - it made a huge difference.

These are wonderful Caroline and makes me want to do collage again too. I used the Artist's Way about five or six years ago and it really got me going with art again. The biggest setback was the morning pages, which I know is crucial to any real progress. If only I could get up an hour earlier.I'm very much inspired to try again now, after looking at these.

Steve - I've found the concept of the Artist Way inspiring in itself - maybe you'd do better concocting your own program?