MMM: The past that lingers 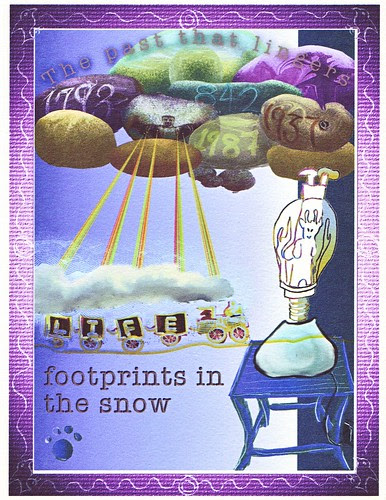 This is the second page in my mixed media memoir. For other people's see:

Last week's first page went quite smoothly - this one has been a much rougher ride!

This is the second or third version of the page itself and having printed it out I then had lots of Painter IX crashes as I tried to get a jpeg to put on flickr - I ended up having to scan in the one I'd printed out! The previous versions hadn't incurred any crashes - I just hadn't been happy with them.

I put all the crashes down to having included a light bulb gremlin! ;-) 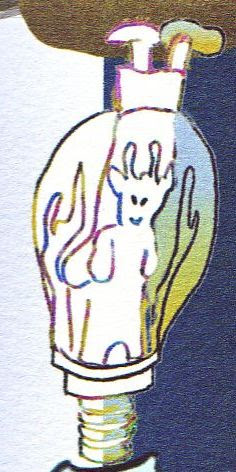 The top of the picture shows karmic stones from both before and within this life time. They may not have originally been mine but these are the ones I'm carrying now...

Rays from one stone are highlighting times in my life (as shown by the smoke) where I've repeatedly made the same mistake over and over. I used the train as a sort of pun on the idea of training... though I'm not sure what I am in training for.... but each moment in the past has led to now.

The light bulb gremlin does haunt me - I repeatedly blow light bulbs when my energy is roused... I first noticed it as a teenager - that bulbs would blow if I flicked the switch when angry.

This is cool. I like the idea of blowing light bulbs with your energy. I used to have a photo blog but my parents had a car accident and life has been a real mess so I use it to whine and moan. I mean to get back to blogging but I have so little time.

It is great how you put so much thought and effort into this! I love the picture. I can relate to computer problems. Tonight as I was about to click save on my post, Maggie, who was sitting on my lap, touched the keys and I lost the whole post! An hour's worth of work gone! Big sigh...I fixed it all now. But it was frustrating at the time.

Thanks catma and welcome to my blog! - I once accidentally mentioned the light-bulb blowing to a next-door neighbour who happened to be a child psychiatrist... its clearly not an acceptable thing to go around believing one does... and so far I've never done it on
purpose... I've always tried to ground myself when I've noticed I might be over-excited.

Sorry to hear about your parents accident - I can understand why anyone would want to whine and moan a whole lot after that!

Blogging is also very time consuming its true. Perhaps you could have a photo blog - after all you already have the material... and its strange how different having a blog is from flickr now that I do both. The most time consuming part is visiting other people's blogs and you could just restrict yourself to one or two - like mine! ;-)

Melba - thank you - and you definitely have my sympathy for the loss of an hour's work - so frustrating! I'm really enjoying looking through my old journals and discovering odd things I'd written about (like the idea of karma stones) or doodled (like the gremlin) and putting them together. Thank you so much for motivating this!

actually i like the small table and light bulb gremlin.

reminds me of the banner i have made in one of my web blog which i called footprints in the snow. and The past that lingers-what a nice title for a chanllenge. great job with your mixedmedia caroline.

Thanks isay - I rather like him too which is why he's made his way here from my journal..

And yes it is a good title - thanks to Melba for that!

Thanks Kyknoord what a wonderful description!

Caroline...beautiful piece here. I love the dates on the rocks; quite symbolic. I can't thank you enough for your comment on my blog. I appreciate your perspective on what I wrote and your kind and thoughtful delivery. I responded to you also on my site...truly, thank you! kelly

Is that what they are? thanks for the id!

I've been enjoying all the graphical journals at MMM and yours is no exception. The symbolism in your artwork is wonderful. The colors you've used in this piece are pleasing to my eye as well.

I love what you've done here. Thanks for sharing with us!