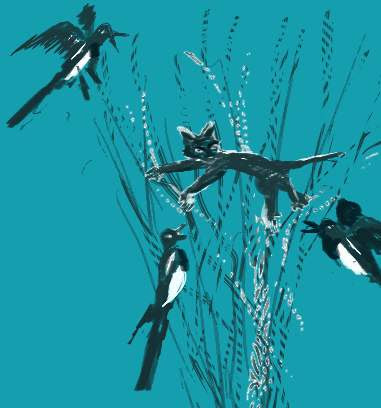 Quick sketch - a photo was impossible as this was a grey day, a grey cat and grey tree... and all a bit too far away too!

These magpies looked as though they were determined to tease the cat up into the thinnest parts of the tree. Once there they flew off and the cat started coming down again, with a very angry swing to its tail.... the magpies had a second attempt but this time the cat was not fooled into thinking it would catch one and carried on down the tree.

In all there were four magpies involved though mostly just two at a time.

Lovely little sketch. It's a tough life being a cat! :) We have a pair of crows who nest in our garden every spring and they not only harrass the cat but dive-bomb the 65-lb. dog.

Tee hee... I hope you don't have to stone the crows!

Mean birds! This is a charming sketch--I like the background color you chose for all of that black and white. I wish you a belated Happy New Year and all best wishes in pursuing your goals.

yes, this is a charming sketch Caroline it reminds me of a children's book illo from books that i have loved... sometimes my dog will ponce into the brush real high just like a cat!

I like the flurry of energy in your magpie sketch.

Was catty wearing something nice and shiny...At least it wasn't just one magpie for sorrow, as they say.

They say four magpies for joy depending on which Century's song you choose };-} I feed magpies each day and they sing for their supper on doorstep :) Your kitty looks very afraid as she should ... also love the energy drawn here!

Ahhhhh... there it is, the mention of a children's book, again, I see!

Love the very electric energy in this sketch. Crows and I guess Magpies, too, are VERY gutsy... they will attack most anything. They are so aggressive, but so fun to watch. And when they are just flying above (as opposed to screeching to harass some other creature), their cry is haunting and nostalgic to me.

great illustration - it has a lot of movement to it! ...poor cat getting teased

Firstly - don't go feeling too sorry for this particular cat - I expect he deserved it - he beats up all my neighbours cats and breaks my pots too when chasing round with his twin. I don't know whose cat he is; he is sleek and beautiful but he also often catches birds.

Laura - thank you - I'm glad you like the background colour I tried it because it had a similar tone to the grey I was seeing but a whole lot more impact!

Valgalart - You have a dog that climbs? Funny!

Johnnynorms - Thanks - there was a lot of movement in what I saw. I think the cat is quite silvery grey and sleekly shiny... yes I hadn't thought of it that way round at all!

anonymous - you'll get me googling about numbers of magpies now... the cat only really started to look afraid when it realised just how high up it had gone... and no fireman to be seen...

nan - you know I must be blocking on this children's book thing - I'd read val's posting and not connected it up at all... thanks.... and you are right there was a crow involved too... I didn't draw it but a crow flew by and made its long craaaaaw which was the signal for the magpies to stop... and probably meant that the crow had noticed me noticing them...

paulsketch - thanks! Now don't you feel sorry for it - I've seen it kill!

It is the red squirrl that gets its' little rump pecked here:))) He does have a thing or two to say about it though!!
Happy New Year!

I dont know about magpies, but BlueJays and Mockingbirds will definitely chase cats/kittens if they feel their territorial integrity is being violated. And I have seen plenty of cats retreat... Of course they always take a face-saving bath soon afterwards!

I love that face-saving bath! I could do with one now and again... :-)

This illustration is definitely one of my favourites.

hehehe I like to see birds harrassing cats, hehe...

Gorgeous colors! The squirrels used to taunt my cat, and she would jump like that. Actually, they still try it, but she's old now, and just gets this "danged kids" look on her face.

GG - thanks! You are obviously of the same mind w.r.t cats as my husband...

Rosemary - this grey beastie is still a youngster I think - squirrels must be braverer than magpies to taunt cats - after all the magpie can fly away anytime!

I've seen this happen with owls and hawks. We dont have magpies here but we have crows and blackbirds. And they harass owls and hawks from tree to tree. The owl/hawk takes it for a long long while then wings it to another tree and is followed by the crows. I dont know when the crows just give up and leave them alone.