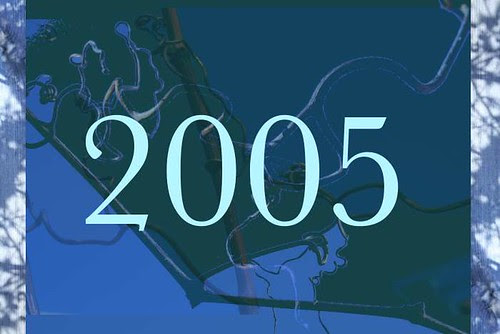 This is a Caroline-centred review of 2005

Well you've had a full year haven't you? I wish you an even better one with lots of art. And I like your borders (I'm partial to borders too).

Looks like 2005 was quite tame compared to mine, apart from the bus/lamp incident - which would have shocked the heck out of me, too. Pretty miraculous that you didn't get cut.

Your wishes for 2006 are simple: I hope they come true for you.

Bonne annee, Caroline! I'm looking forward to what your always interested and varied blog delivers in 2006.

Happy New Year Caroline! Love the new header and borders only contain our creativity! See yours are the same as mine - just there :) Have a wonderful 2006!!!

Thanks for the New Years wishes - I hope all of yours are better than you could possible expect!

Janey - somehow your borders become part of your work - I still find myself fighting the containment...

Wandering Coyote - I suspect everyone's 2005 was tame compared to yours - the 2-toothed cook scares me and I've never seen her!

Andrea - I've modelled my blog on yours to some extent - did you realise that?

Anonymous - there are those who think my creativity ought to be more contained... perhaps that's why I resist...

What a great recap of 2005, Caroline. It was quite a year! I'm quite honored to be the first blog you mentioned. I like your wishes for the new year and I hope they come true for you. Cheers!

Btw, the link to Daylesford Organics didn't work for me...

Thanks Nan - its great isn't it that one of my first "finds" was you! And I've fixed the link now... sorry about that...

Caroline: I had no idea and I'm flattered! I thought mine was kind of flaky because I jump all over the place. I guess yours does that a bit, too, and that's one of the reasons I like it so much! :) Let's raise a glass to variety! Cheers.

happy new year caroline!! isn't the blogging world wonderful! wishing you a year of creativity and loads of fun dreams. :-)

Cheers Andrea - to variety the spice of life!

kat - thank you I love having people wish for me! I wish you a wonderful adventure with the artist's way group you are running and all the best of everything for 2006

"Anonymous - there are those who think my creativity ought to be more contained... perhaps that's why I resist... " Block your ears with hands and go ARGHARGHARGH! Don't let them stop you!

Ah but the reason they want to contain me is they have their own hands over their ears and are complaining that I'm singing out of tune!! tee hee

Yep that's what I thought... but it was also easier to leave that group than try to carry on doing enamels with my hands over my ears!

Oooh, can't let the beauty of our enamals suffer! (or hair or ears) Hahahaaaa