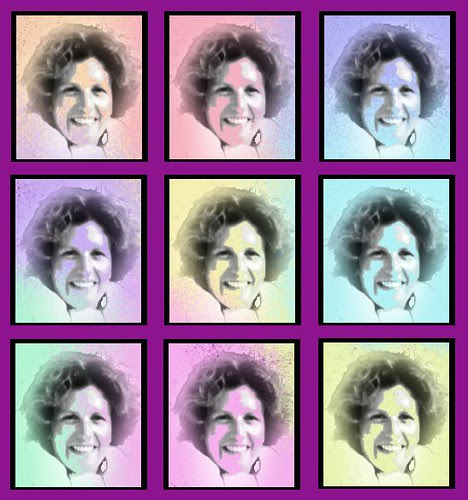 I've had various prompts to do this post, not least an out of the blue email from Lee's sister saying hello and asking where the web page I'd done for Lee had gone...

Lee was an incredible sky diver but she died following a mid-air collision in April 2003. By then she had moved from Bristol to California then on to Australia. As I wasn't well enough to regularly use the computer for email through much of this time I'd had little contact with her since 1996. However her death was a real blow to me and I grieved her loss fully.

One of the consolations I had was discovering a blogger who mentioned her. She had never met Lee but worked with her.

I made Lee a web page despite the fact that it made me quite ill to do so. And the idea of one day doing my own blog was planted.

There is another page dedicated to her and looking at it today I noticed that there was a picture of her with a Marilyn Monroe statue so I thought I'd do a variation on the Andy Warhol Marilyn pictures for her.

For those of you interested in Andy Warhol, whilst looking for references I found a page where you can play with the Marilyn image yourself.

My biggest regret is that I did not go to see Lee whilst she was in Australia. She'd written to tell me she had one of my paintings on her wall but I couldn't picture her properly... and so my resolution for 2006 is to go and see those people young or old whom I value in my life.

Email ThisBlogThis!Share to TwitterShare to FacebookShare to Pinterest
Labels: obit

I didn't get to say goodbye to one of my favourite people, my supervisor in tv [I used to work in television, in Jamaica].

I was coming home for the holidays, I told everyone bye except him. I couldn't find him. He died of Aids while I was away.

When I remember him I feel sad that I never got to tell him bye.

I make that resolution every year to visit the old and sick.

My resolution for 2006 is: Carpe Diem... I live too much in the past or in the future...
Nice illo and nice story!

Nice, Caroline: touching without being sentimental. What a lot of life Lee had in her. I suspect she had no regrets and who can ask for more?

I enjoyed reading about Lee. Don't do resolutions myself because always have a far too big list of things to do already :)

GG - thank you for sharing your own loss. Its a good resolution.

merlinprincesse - enjoy your moment as a dead fish :-)!!!

andrea - I felt a wave of love come from her to all people - she was much more sociable than I am!

anonymous - you could resolve not to put so many things on your list???

Nice tribute to a person who obviously lived life to the full and had an impact on many.

Resolutions? Quit complaining about my job and be thankful I have one (until I can find something else or retire).

Thought of that ... but it's really just adding another item. Lists work - had one when 8 of what had to be done by 30. Current list is until death do us part which I'd rather not cut short :)

Caro, great and poignant reminder that, as Princess says, "Carpe Diem!"
Nothing wrong with seizing the day, as long as you don't tread on other people's toes!
Dead fish? Poor sole!

Nan - that resolution seems to me rather like that of merlinprincesse - this time more like don't carp just seize the moment!!!

anonymous - I see you just have resolutions all year round - now that makes sense - when do you review your list?

cream - you are adding in toes.... does that mean you use your toes to fish for carp? Sounds like a way to have the fish tickle you!

anonymous - every morning on waking? I prefer to stay with my dreams a bit longer! This morning I had a very strange one about 3 women in red that only people who had certain vices could see...