MMM: If I peeled back the layers they would see... 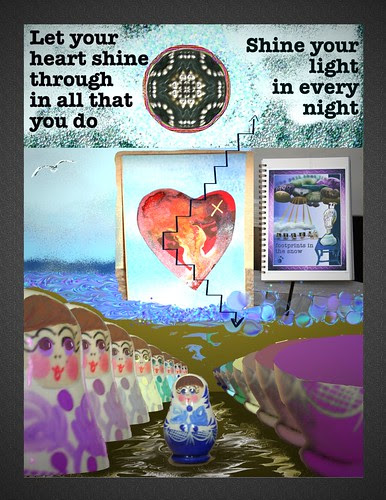 This week's topic for the Mixed Media Memoirs is: "If I peeled back the layers they would see..."

Doing these MMM I have been actively peeling back the layers... So this week's image includes my MMM - I photographed the book I'm putting each image into.

Recently I've been working with energies derived from the shamanic three world model. When shaman journey they often go into one or more of the three worlds: lower, middle and upper world. For instance to find your power animals you are most likely to go into the lower world, to meet a spirit guide you would probably journey into the upper world. The middle world is very close to what we experience as manifest, physical reality. 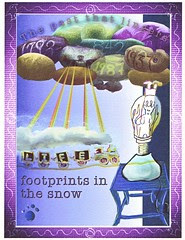 When I posted "The past that lingers" three weeks ago I hadn't noticed then that the picture was very much a three world one:
And of course plugged in to the lower level but plagued by cheeky gremlins leaping in at the top level was my table lamp. The light attempting to light my life, but blowing now and again.

That week's MMM came just before a massive clearing / healing crisis. I'm still processing to some extent as it really has signified a big shift. That's why I show the MMM open at that week's image. 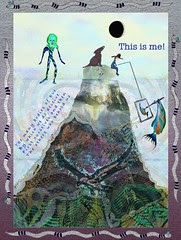 As someone has just commented to me by email, (and which happens to fit the first MMM):

Judging from the amount you put into your MMMs, it would be surprising if things didn't come to the surface. It's sometimes necessary to look into deep water to see a proper reflection.

An excellent description of this whole process. Thank you, Kyknoord! 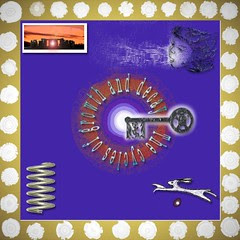 One of the values of keeping a journal is that one may spot some of the patterns that one's life falls into. And one of the huge values of doing the MMM is that, for me, this is an incentive to translate those patterns into pictures.

I do this without really understanding what will come out later though I can give reasons for most of what I've put in at the time.

This image of cycles of growth and decay came whilst I was clearing and I'm hoping means I've found the key at last!

It certainly brought me hope while I was feeling rather grotty. 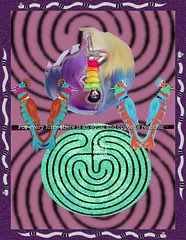 Last week I declared that I was ready to stop avoiding being myself.

I depicted a labyrinth, an ancient symbol. I made it green because at the time I was thinking of something similar I'd made in enamels and I used the blue-green of oxidised copper as a reference to its age and its material.

However now I also see it as being a somewhat lurid grass green. The only labyrinth I've ever walked is at Saffron Waldon in Essex where there is a complete turf labyrinth. I don't know where, if anywhere, this will lead me but as I'm unpeeling I thought I'd mention it.


When you peel back those layers what emerges is indeed myself. However it depends on your point of view what you see. 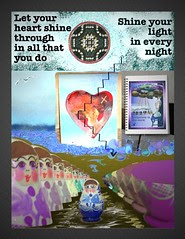 So this week's MMM is about what has now emerged.

This time I was consciously using the three world model:
The upper level shows a mandala - which is one way of healing and making whole. And words that I've recently written:

Let your heart shine through in all that you do

Shine your light in every night

Both easy enough to say though putting them into action maybe less straight forward.

Especially when you've got gremlins in your light, which is another reason I put that page uppermost in the middle section. I need to tackle them!

I've used a symbolic heart - it was Valentine's Day when I was making the picture ;-) - and because that chimes with the words. I'm also using heart to mean centre. And its from one's centre that one may move up or down to explore these levels, note the convenient stairs.

The sea here represents the emotions. They are real and not to be denied. It is all too easy to yearn towards spiritual experience and want to explore those higher levels but often one needs to do more to sort out one's baggage before flying. And the place to do that is in the lower levels. By unpeeling. 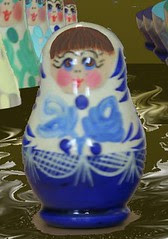 I've never owned one but used to play with one at my grandmother's. So on Monday I went to our local shops on the off-chance I'd find one.
In one shop I learned that they are not "Russian dolls" as I had been taught to call them but are called "Matryoshka".

Caroline, I find your posts on MMM most interesting. It's like reading a book and the further you get into a chapter more is revealed. thank you for allowing us into your world and journey

First, I love your heart ATC's. I have never done a swap. It seems I always find them when they are already in progress. If you know of any new ones, drop me a line please.


Your MMM intimidates me! I am joking...sort of. So much symbolism, I feel as though I need to put more thought into my art. I really love the pictures of the Matryoshka and the idea of them nesting...opening up is just like peeling.

How do you find your spirit guides? I use to meditate and try to call them forth. I have read some books on the subject. Sometimes I really feel presence; I feel energy..it is palpable. I also think all children easily see spirits so I try to be open to what my children are doing and saying...especially when they are playing or seem like they are talking to an imaginary friend. I would love your thoughts on this subject.
Thanks!

Toni - thank you - I'm finding it very inspiring - I too wonder what will come next.

Melba - Thank you its the only swap I've done, but if I do notice some others I'll let you know. I'm not currently planning on doing any more but you never know!

My MMM intimidates me too! I'm more and more suprised at what I'm producing with these and how they are tying in with the other work I do. I really value what you are enabling here.

Spirit Guides - when working with the shamanic model I mentioned here, one starts by finding a good power animal first. This then helps greatly in guiding (and protecting) the seeker to find the upper level spirit guides. But if you are already aware of a guide then it is working out how to communicate more that will be useful.

Being quiet and receptive will certainly help. One thing to keep in mind is that not all spirits are guides. And another is that the messages you get from guides might not be "true" though they may well be what you currently need to hear - like the oracle in The Matrix telling Neo that he isn't the one...

Very, verrrry interesting Caro. Isn't it amazing how various themes come up, over and over again? I'm quite interested too in the themes of light and dark and looking within oneself to discover light, strength, and o learn about yourself to make changes. We all have gremlins, bugaboos, shadows.

Mmm, imagine a book with your art, photos and text.

I have to confess to the same intimidation... I often feel as if I only touch the surface in what I really understand in some of your more symbolic posts, but I thoroughly enjoy reading them. They challenge me to think in new ways. I feel fortunate to be let in on your journey, so thanks :-)

wow, speechless.
so creative!
wonderful.
i must try something like this.

come by to read the new story

GG - without light is there just dark or is it simply a state of no light? I don't mean physically but when looking within... And at the moment this blog is my book.... though I'm enjoying making the printed out pages of the MMM and having something to look at in that form... I've just put this week's picture in after keeping it out for a while to see if it would say anything more to me... it hasn't yet!

Nan - so you are in the same boat as me then! I have been attempting to let what needs to come, come and to just letting it happen. I sometimes wonder if the words I write have any meaning at all but they do seem to need to be there too... have you noticed that these pictures are all in the same style but, to me at least, its not the same as any of my others?

Joli Noir Perle - thank you very much for coming by - Melba is keeping the MMM open so that anyone can join in at any stage if you would like to use her suggestions.

Nan - that's probably whats worrying me... but then again if I really have managed to peel down to the me in the middle its just a matter of getting to know myself...

This is really beautiful! I'm so glad you explained all the bits. It makes me reflect on my work and see what's bubbling up that I don't notice.

Thanks Joy Eliz - if you have a similar experience to me it will be both rich and somewhat daunting!

Caro, you ask 'without light is there just dark or is it simply a state of no light?'

I tend to see no light. I picture pure darkess. As if there is nothing there. A loss of consciousness.

One has to make that journey, it's a difficult journey, and the more inward you go, you begin to see shadows, then a bit more light...until you finally get to the light.

Okay, now you have me thinking...

Let me know what you come up with ;-)

You clearly have a great deal of skill in many areas, but your mixed media/collage work is still my favourite.

Thank you Andrea - I like doing lots of different things but one of the fun things about mixed media and collage is they can all happen at once! Wheeeee!