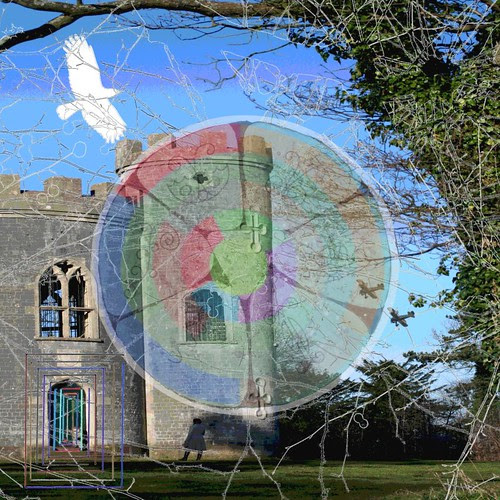 I found this game over at Merlinprincesse's blog

The image looks like some sort of sacred druid thing ~ an unidentified holy symbol against an ancient castle, symbolic bird and network of branches. Enigmatic and lovely.

Thank you - did you spot the two little biplanes as well... they were buzzing around together like this.

And that picture is crazy! (I mean that as a compliment)

The illo is complex and mystical--I like it. The trivia facts are very fun and kind of silly which fits Mama says Om's theme this week :-)

Wandering Coyote - I was wondering where I could buy one ;-)

Viking054 - it doesn't say that those birds get to where they want to go does it? And thanks for the crazy compliment too.

Nan - I've been avoiding joining in with more themes and challenges but I'm happy to know I've done one by accident!

there must be some mystery or power enveloping the colored glass window that it flashes and comes out of the frame to attract birds and send them messages.

That white bird in the top piece reminds me of a quilt I've done, a white bird flying towards a huge sunflower.

Your art makes me think of dreams, and the way I like to write, Caro.

Your blood and your lines are blue!!

Isay - very observant - stained glass would certainly be a good explanation for the coloured circular design - though not one I'd thought of! The funniest isay one that I got was:

# All shrimp are born as isay, but gradually mature into females.

GG - are we overlapping images and thoughts again?

the contrivium says:
# GG is physically incapable of sticking her tongue out!

Reluctant Nomad - does that make me a squid?

hi there - I tried that test & apparently all of the animals in the WORLD belong to me! I love it!

I saw your comment at Melba's too - I tell ya, there'll be a girl on a plane from the UK so fast when all of that happens - this community is SO amazing!!!

Megg - lucky you! When I put Megg in I get, amongst others:

Wouldn't it be odd if we met for the first time there... when we are only about 100 miles apart in the uk!

Hi Caroline...thanks for popping by and your words of support during my spotty phase. Interesting game this...thanks for sharing.

There are now actually SEVEN towns in the U.S. named Caro's Lines. One just popped up in South Texas. Fyi.

Thanks for your kind words on my blog! Love your art. :-)