MMM: The trajectory of my life changed when... 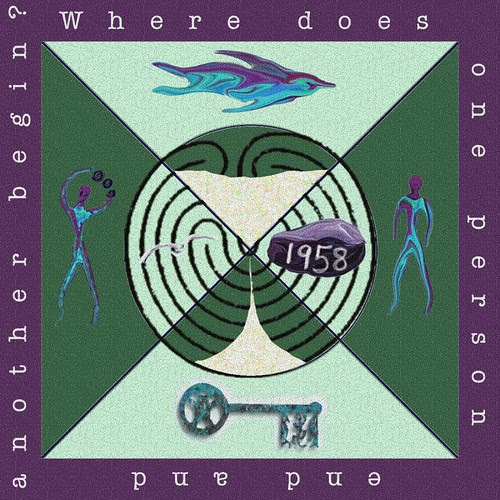 The trajectory of my life changed when I was born.

Time, time passing and where one person begins and another ends have been common themes in my writing in my journal. Maybe the sand started falling in my hourglass when I was born, though I do wonder if I should consider it from conception... both of those were in 1958 so I've put in my "karmic stone" for that year.

That time in the womb is something about which I have no conscious memories. The wabi sabi writing course which started in the first week of January began with an exercise that involved writing about what it had been like in the womb:

When I was in the womb I was getting ready. I put lots of my memories into little pockets that I would be able to access now!!!!

They are waiting for me still, some have already been plundered and one or two have been accidentally rewritten or squiggled over by the younger Caroline.

When I was in the womb I was wiser than I am now. I had the memory of hundreds of years, thousands of life times. I was and I am.

An interesting exercise as it gives one such scope for establishing one's foundations and I made them as limitless as I could! I've been seeing some of the MMM exercises as a way to explore those pockets of memories. Though I've usually included a key (rather than a pocket) to help unlock what has been previously locked away.

The wabi sabi writing course is now into week 8 and part of the title is "walking the labyrinth" - which is great as I was wondering last week about the labyrinth from the week before... so I've included it again here as a background for the sands of time.

The figure on the left is juggling in a strange manner. I transformed this figure into the one simply standing on the right. And this was in turn transformed into the aquatic animal at the top.

Where does one person end and another begin?

Update: And in my first look at others blogs what do I find but
"At what point does one thing become something else?" from Willie Baronet
And to show that juggling is related to song (the IF theme of the week) see Ellen's "Song to Jugglers". (And it was from Ellen's site that I found out about the Wabi Sabi writing course last year.)

Thanks Lori - yes there is a yin/yang thing going on there... and the perception of oneness or seperateness... I like the way you relate it to seeing illusions.

Rramone - I guess that must be the answer... have you got mine right now? and thanks!

Oh, how nice is that! I'm referring to the fact that I'm younger than you are, of course! :-)

After Carla's comment on my post yesterday I started thinking about art with narrative and philosophic content and of course yours came dierctly to mind. And today, you don't disappoint. Layers -- fascinating.

reluctant nomad - no need to get uppity young man! (And word veri says xrzen - so in the world of zen age is just a kisser... )

andrea - Its funny, I write a lot, I play with words and yet I still don't feel they are my medium....

Jody - thank you, yes it is too much to think about - that's why I have to get it out of my head!

I love your artwork as ever, and the writing has done something strange to the inside of my head! So much to think about and realisations about to be born I think. I have much to say about life in the womb... maybe I should blog it.

thanks zinkibaru - please do blog about it!

I wonder if babies in the wombs have their mothers thoughts.

I've been writing a short, short story called "Oh Mammy," about a baby in the womb.

This has some of the same elements, but overall is quite different than any of your other MMM pages. I like the way the labyrinth appears in so many of your works. Your thoughts are, well, thought provoking :-) I am not spending much time these days in such deep self reflection and exploration, but I am certainly enjoying yours! Keep it up.

Nan - yes, last week felt like the end of a chapter. And this one feels like a flashback... and thanks for the encouragement... there are times foer such deepness and there are times for other things... but this time of year is one which has often sent me deep...

Ascenderrisesabove - thanks - labyrinths are an intersting form of mandala to me... the course is fascinating... meditating through writing.
Ideal as a way of pulling on those threads of thought that need unknotting to allow a clearer mind.

Water. Hypnotised once, and what you describe when in the womb is correct!

Anonymous - how exciting! Do you remember now without the hypnosis or has it all gone again?

Can remember the sense of it ... thoughts, some still beyond ... the security and knowing. It's what was beyond that time I don't care to remember so much ...

Not so good then? Or just difficult to square with your current self?

this is so interesting, great work!

Difficult to square with current self but also difficult to be brought out of at time. Saw my reason for a former tragic ending. Have different principles, although you could say the opposite to extreme. Remember lots of detail to this day but don't feel a connection apart from having been the young person's thoughts.

I clicked on you MMM way earlier today, but got lost in links and never made my way back to you. This has happened to me twice today! I was thinking about you this morning and I felt this energy from you. Do you have a nick name? Can I give you one?

All that aside, I love how your art and posts make me think. Really think. The stop and think kind of thinking. I am pretty sure you have mentioned stuff from the Celestine Prophesy; that book really helped me see the all of everything...how we are all connected and one. I like the swirly figures; standing and juggler..they are very fluid figures...like they could change at anytime.

I can't say wabi sabi without giggling. I need to grow up :)

Anonymous - did it help you in anyway to go through this under hypnosis? And did you go further back still?
I've met lots of what might be termed past lives - mostly in dream or journey. Some have hung heavy for a while but mostly I've had gifts from them. Or they've said I could do all sorts of things that I still haven't mastered.... like playing the didj

Melba - yes I have a nickname that has been given to me twice by two different people... but you are welcome to give me another... I think it will be different... I'd love to know what's come to you.

In my words blog I had started to work through the Celestine Prophesy experiential book with a friend but she stopped blogging and I haven't carried it on, I read the book itself quite a while ago now so I may well use terms/concepts from it without thinking.

Only saw decision for former death and minutes for reasons why, which still mystifies and even haunts me. Saw present time before womb which did help with clarity although confused on day.

The past life experience did begin a search for the place/climate/building I saw and clothes/uniforms also. I was thinking in the wrong language, although another later time it was confirmed I should have been thinking English. Which puzzles me further.

anonymous - how odd that thinking in English should have puzzled you.... that feels like its important somehow... thanks for telling me so much about your experience.

tee hee... maybe you were some other sort of european and english was only a second language?

Hmmmm, a uniform was either French Foreign Legion or French. Thought English, house made of sandstone blocks, snowing outside. Cook and bread maker downstairs. Lady wearing lots of layers, top layer blue. Your guess is as good as mine :)

Is that so, was I there too?

word veri is now saying bmmmuk.... which sounds like quite an Aussie reaction!

Nope, don't know that word. Could be bmmmuking up something ...

I haven't picked up on any of those... maybe another link from another time and place will emerge... I've had memories from a lot of Australian past lives... some white, some black... lots of power and lots of mistakes too...

No don't feel you were there then at that place.

I asked you once what the name is for a spirit that jumps in and out of bodies as they please. One is from Australia and has a special name but can't remember or find it.

I can identify several different types of spirits that do this but do not know any official names. Some people are more porus than others... I had to learn the hard way...