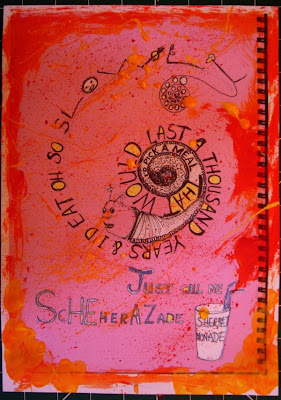 The above is my response to a prompt on a yahoo group I've just joined - Blissfully Art Journaling - the prompt was to describe one's meal choice for one's last ever meal - a Last Supper. My immediate thought was something that would take a very long time to eat.

Then when I was in the bath I started to sing (luckily this went unrecorded!) but the words included "I'd pick a meal that would last a thousand years" and later I realised this was picking up on Scheherazade's tactic of telling stories to prolong her life by telling a 1001 stories. I had a favourite version of the Arabian Nights book when I was a child and at the back it had suggestions for dressing up and meals... the only part of which I currently recall was a drink called a Sherbet... And when a child one of my favourite sweets (candies) were Lemon Sherbets... hence Sherbet Lemonade. The Very Hungry Caterpillar also came to mind...

I started off in a "normal" journal, scanned it, added some colour digitally, printed it out onto card and added some paint. I rather like this process and so yet another style of journal is begun... and I have the very place for it... the other day in a charity shop I bought a book that was in the form of a ring binder...

Yesterday in saying hello on the Blissfully Art Journalling group I boldly claimed that I've done something which might be called art journalling for years and years... though I always start the books with a promise to myself that no-one else will ever see what I put in them... and then overnight the doubts crept in... was I boasting to say I'd been art journalling all this time?

So I picked one of my old journals at random (1991) and these are a few of its pages (never before shown to anyone!) 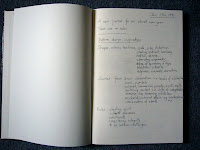 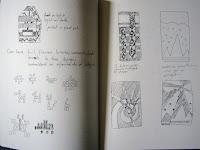 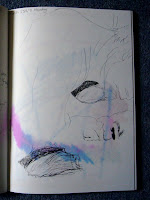 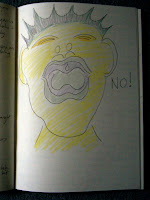 Now I'm definitely not claiming they are great art but I think art journalling is a reasonable term to describe what I was doing... and some even had colour... though most do tend to be in pen... and there is plenty of ordinary written journal in there too.


In the Altered Book course that Elizabeth, Altered Book Lover, is currently running she has suggested trying both wet and dry sgraffito using acrylics in our books.

I've used dry sgraffito successfully when working with enamels on copper and painting on glass - in both cases the "paint" is applied to a smooth impenetrable surface and is very easy to scrape off - its then fired in a kiln which melts it enough to make it permanent but without losing the detail. Its possible to do both very bold and very delicate work like this.

Doing dry sgraffito with paint on paper is clearly somewhat different and quite a challenge.

Its something I'd love to get to work.

Attempting to do the dry sgraffito technique the first time didn't work for me... I couldn't get down to show the colour (bright lime green!) I'd applied underneath and only managed either a rather dull scratch or a rather brutal (and hard to control) scrape that went through to the paper. 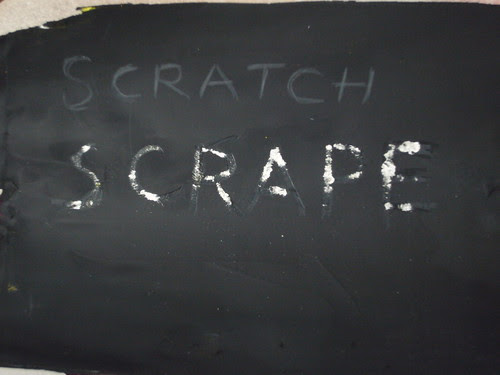 However the wet version was excellent.

I added some acrylic matte medium to the top layer of acrylic to make it thicker. And worked with the non-brush end of a brush.

Over the wet sgraffiti, once it had dried, I also experimented in some areas with another colour on top, applied in various ways: 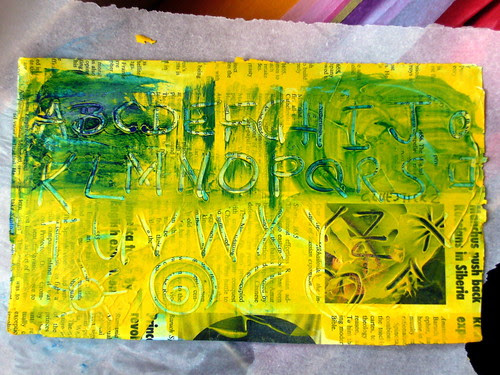 I can see how this will have fabulous applications but I'd really like to get the dry sgraffito to work too.

Here is the first experiment of black gesso over wax crayons: 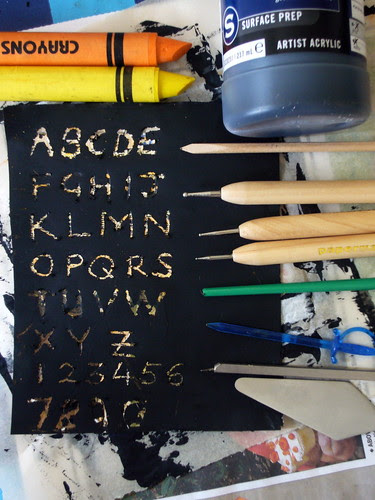 The two smallest tipped metal tools (sold for embossing I think) were the most successful. The gesso was hard to apply in even, single, thick coat ( I do normally use it thinly and multi-coat... here I was hoping to find a technique that wouldn't require too many coats!)

The next is black gouache over wax crayons - I added a little drop of washing up liquid to help the gouache cover the wax. 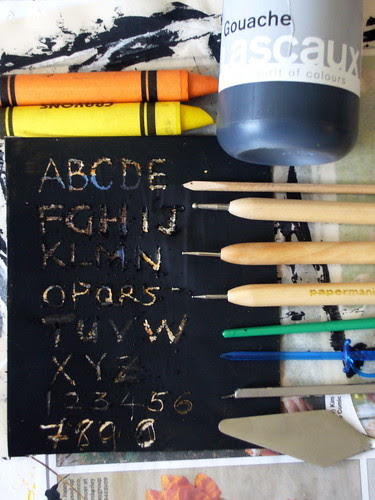 The gouache took MUCH longer to dry than the gesso - otherwise the results are similar, though the pointy wooden tool (top) worked much better in the gouache than in the gesso.

Both of these were more satisfactory than my first attempt at dry sgraffito.

The next set of experiments were all total failures! I used acrylic followed by PVA then one of these: Gesso, Gouache, Acrylic + Matte Medium (50:50 approx), Black ink. Then I used the same things over a piece with acrylic followed by a thick layer of polymer gloss medium. It was possible to peel and hack but not in a controlled way and mostly taking off layers of paper. I also tried black ink over Caran d'ache Neocolor II with no luck.

So far then the only success has been with paint over cheap wax crayons...

I've read about working on clayboard so maybe the solution is a very soft, thick layer of something under a thin, scratchable top coat.

How fascinating this post is! I love the Scheherazade piece! It's delightful! :)

They're journals that have art in them - they look like art journals to me!
Sgraffito - poster paint (pretty similar to gouache) seems to give the most colorful results. I have tried scratching back into layers of acrylic paint sometimes with some good results (seems to work best if the substrate is wood or canvas, rather than paper, and the underlayer is very dry, and the top layer just barely). The premade ones are fun too, haven't tried them in a long time, you're making me want to again, though!

Those are art journals alright! I never doubted you for a minute!!!

I love the idea of doing art and scanning it and doing stuff to it and then printing it again and putting it into other art. Tracy Bautista in "Creativity Unleashed" says to scan all your art work and then print it and use it in other work. I have even taken to scanning some things part way through so that I can use different stages in other work if I want to!!

I love all the meaning behind the last meal piece. Looks great too! Wonderful that you're experimenting, and keeping a record of what works best. I love seeing and using sgraffito in some art pieces but usually just reach for the closest sharp object available with mixed results. Like your methodical approach.

Tinker - my inner critic must have been having quite a night of it... by the time I looked I'd almost convinced myself that I'd find just boring writing... and even now the fact that I only looked in one is being flagged in my head... but there are journals from years that I really don't want to look in (before the end of my first marriage, and 1991 was a close squeak with respect to that...) so I'm NOT going to go looking through them all now!

I used the gouche as I hoped it was be a little better than poster paint but you are right I ought to try that too, I have some somewhere...

I might get some pre-made as well... just to see... though I am hoping to come up with a reasonably inexpensive solution to use throughout much of this particular altered book... I can do it digitally and then print it out but I was also hoping for a messier more hand's on (and up to my elbows) sort of solution!!

Mixed Media Martyr - thank you - luckily you don't have to attempt to sleep whilst my inner critic is muttering! And yes its fun to use ones own work as source material in other works... I used to do it with photocopies but of course digital manipulation allows for even more flexibility...

Ellen - thanks - I was quite surprised at how much did come out of what was a simple suggestion for a last meal - for instance when I asked Jim he simply said "Cheese on Toast".

I've not felt like being this methodical before... its the influence of the AB course... and also the sheer challenge of getting dry sgraffito to work on paper when I've had such success with it in the past on other surfaces.

Fascinating. I love how you documemt your creative progress and really, your blog is an art journal as well. The top drwaing is great -- I love how the spiral part works with the words.

Getting words to work in what is otherwise image-based is quite a challenge for someone like me, in that I seem to keep words and images so separate, but singing them helps bridge the gap.