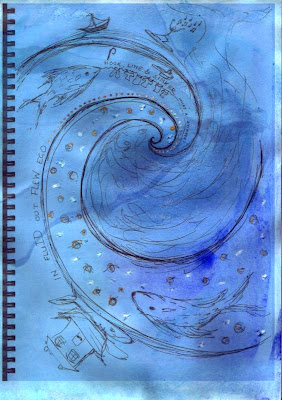 Yesterday's prompt on Blissfully Art Journalling was about how fluid one felt. This was my response. This time after scanning in my original page and adding a photo I printedit out on card then added some gouache, then submerged the whole in water! It took quite a while to dry... Finally I also added some gold and silver but they haven't scanned well.

Yesterday I noticed this in a charity shop window, after closing time:

Its not a perfume I'm familiar with but looking it up on the web it appears to come in a curiously shaped bottle that might be described as a bust... in which case this bust was bust... :-)

I felt the moral was that if one feel's shattered it may be because of something that's been bottled up.


Yesterday I forgot to show the niche I'd made for my Spirit Doll of the East:

I happened to make her at the Vernal Equinox so the others will have to wait their turns: South at the Summer Solstice, West at the Autumnal Equinox and North at the Winter Solstice. At least their niches are ready for them.

Now any suggestions for finding really hidden bottled up things and releasing them gracefully?
Posted by Caroline at 4/03/2009 03:51:00 pm

Caroline, love your fluidity! I need to get on my 'fluidity!' - a fellow Blissful Journaler, Jennyart7

Love your fluidity page! Your drawings are very fluid! They are just brilliant!

Jennifer - thank you - I felt the need to go with the flow on this one - even if it led to a whirlpool...

MMM - I hope you don't mind me shortening your name! Thanks - the very idea of fluid helped me loosen up.

I'm in the process of doing just that! :)

I love your spirit doll niche/nest...Holding space for the others to follow...Fluid literally! Thanks for describing your fabulous journal process! I'm finally feeling well enough to catch up on all of my favorite blogs and friends! Thanks for your comment! xo Camilla

I enjoy reading your synchronicities. I thought for a moment that perfume bottle was suppossed to be like that! which would be very surreal.

Good for you for all your art experimenting, lovely journal page and I really like the text that goes with it.

Love this Blissfully Art Journalling prompts and results in this and your last post, just makes me wish I could make time for a little blissful journalling too!

What an interesting connection you made, about feeling shattered and things being bottled up...
Nice niche, Caro - and your blue painting has a lovely fluidity to it!