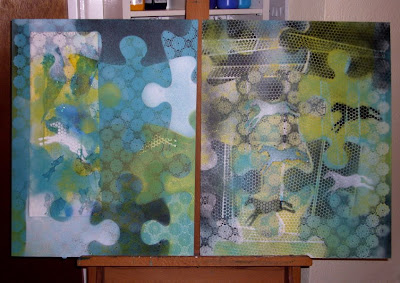 Mary Ann's (Dispatch from LA) on-line Stencil course has begun! And this is what I've done so far. I'm not sure that they are finished but the light is failing and I'm stopping for now.

This first week is working with "found" stencils - so that means not having to cut one's own yet.

I'd gathered quite a stash to play with but constrained myself to a few to begin with. Though just choosing to use the big jigsaw pieces added in rather more complexity than I'd been expecting. They are gigantic pieces from a child's floor puzzle - it was one that had pieces that had been mended and was reduced in a charity shop. It was quite easy to do when the picture was visible. This is what it looks like now:

I used one of the big plastic "lace" things and it picked up the jigsaw pattern rather well:

Though having used it like this for both these pieces I feel its a bit too static and would move a smaller piece around instead if I was using it for a background like this again.

Email ThisBlogThis!Share to TwitterShare to FacebookShare to Pinterest
Labels: stencil

I just saw your work over at the class blog and I love it!! The big puzzle pieces are great. Isn't this just the best class!!

Carol! This is brilliant! Love it!

Janet - Hi! Yes its a fabulous class - most inspiring - stencilling in a way I've never done it before - at all! It took me a while to see the potential of those big pieces...

Brian - Hello to you too! Thank you. What fun it is to be playing this way!

I LOVE what you've done! Yay for you! you rock.

Chris - thank you - I'm so glad I took the chance to stencil yesterday - today there's been no possibility whatsoever!

Yowza! Gorgeous! I hope to do mine for the class tomorrow.
M

YOu have begun and I am merely procrastinating,. getting UFO's out of the way so there is mental and physical space..

I didn't realize this one and the stenciled hands were yours too. I saw them and thought of Michelle Ward's "Shape" challenge. I was going to do a hand stencil but got busy with other stuff. Thanks for the inspiration!
M

M - thanks - I don't do Michelle Ward's challenges - those are on GPP street aren't they? - I've just never got around to taking part in them...

Caroline, your peices are great and I like the different stencils that you used and colors.

Using the giant puzzle pieces was a grand idea! These are some beautiful portfolio covers!