Careful What You Wish For... Even When You Don't Realise That You Are...

Today Jim unearthed a whole cache of wonderful things... like the A3 paper for my printer that I've looked EVERYWHERE for, well except I hadn't, obviously... and some art materials that I've been missing... and this cutting from a magazine.

Jim had cut it out because it has a tortoise on it.

When he was a child he wanted a pet but his parents weren't keen. Then a stray tortoise turned up and, even though they found its owners, Jim got to keep him.

At that time the Guardian newspaper's Saturday magazine had a column called "That's My Pet!" - it featured three people, sometimes celebrities and others too, and their pets. The idea was to match up the person with their pet(s). Jim was good at guessing whose pet was whose.

In this cutting, not especially carefully saved, but saved nonetheless, were a tortoise, a cat and two dogs. But not any old dogs, though in those days neither of us would have recognised them without the useful caption: 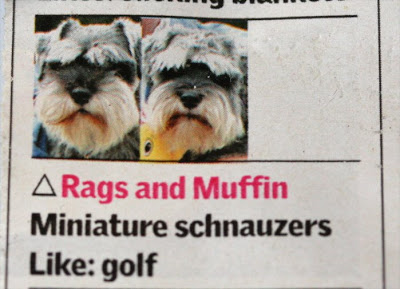 It took a few years but I think the seed was sown without our realising it then... Here is Teasel, the Miniature Schnauzer, that's my pet now:

And the cat? Well it was called Luna.

At the time of that column, early 2004, we were just about to move out to a rented house in Minchinhampton. Whilst we were there we got this house done up and on the market but it didn't sell... there were lots of strange things going on... for instance:
The burglaries were 2 moons apart... (2-3 days before new moons)...

I've been cautious about wishing again for the house in the Cotswolds that I still yearn for... but now I'm daring to once more... right now its just the seed of an idea, a dream, a reflection lapping in the mirror of my mind and my cocoa: 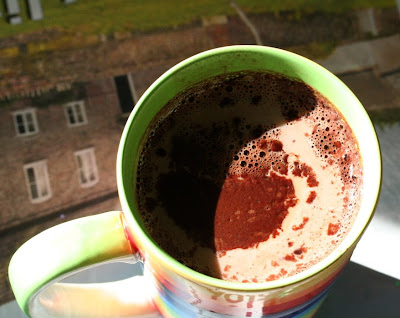 Join me in a full moon cocoa with a dream of a house in the Cotswolds.

Email ThisBlogThis!Share to TwitterShare to FacebookShare to Pinterest
Labels: dreamboard

your cocoa looks a bit gibbous there, but I'm sure it's full now. Happy dreams!

As Caro wishes fro herself so I wish also.

May the Full Pink Chocolate Moon materialize your dream house in the Cotswolds! :)

You materialized your pets, the next step is the house :)

As Caroline wishes for herself, so I wish also.

And surely with that kind of manifesting power, all your dreams are on their way :)

As Caroline wishes for herself, I wish for her also.

Amazing how magic happens with or without our attention. I love it when that happens.

You've made me wonder what I might be wishing for that I don't realize I'm wishing for...

What Caroline wishes for herself, I wish for her also...

thanks for the information...Caroline I forgot you were in the uk...I would love to do the greenman journey...


I love lonnngggg messages, with or without strange occurances.

This was kind of like reading a blog-post-sized novel. (You should have seen our moon last night! ~ I'll use that as a sign for the future Cotswolds cottage.)

I absolutely love it!

As Caroline wishes for herself, so I wish also!

As Caroline wishes for herself, so I wish also!

Good luck with the house sale, it can get very complicated.