MMM: I am ready to stop avoiding... 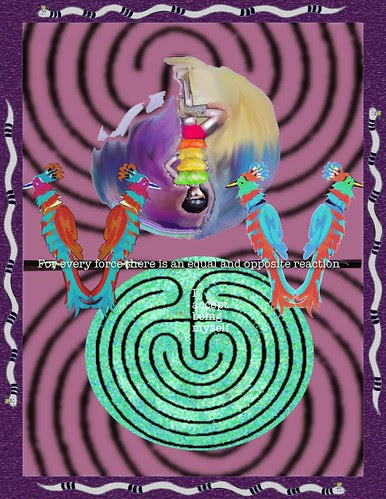 This week's topic for the Mixed Media Memoirs is: "I am ready to stop avoiding...."

For other people's see:

I am ready to stop avoiding... being myself. So into this image I put the following:

"I accept being myself" (I prefer the positive wording for this!)

The word myself is at the centre of a labyrinth. Labyrinths can be confusing and disorienting but, unlike a maze, there is just one route to take. Taking it means that you cover all the ground over which the labyrinth is spread. The key is not to give up.

I looked for something similiar I'd made when I was doing enamels but I ended up having to create a new version digitally.

"For every force there is an equal and opposite reaction"

The birds that go with this phrase were inspired by the two of birds from the Shining Tribe Tarot, which is an extended tarot using many prehistoric images and mythical elements.

It depicts two very similiar birds going in opposite directions and ignoring each other. In my version I also put in a negative of the two birds to show that sometimes it is the opposite that we see and are attracted or repelled by.

I know that sometimes the thing I most resist will turn out to tbe the most beneficial. Other times of course its my intuition saying "not a good idea..." the trick is in spotting the difference! ;-)

Hence this is an expression of my acceptance of my shadow side and my continuing attempts to shine a light in there.

There is also an image that I call The Dreamer. I made her over a year ago out of collage and then digitally altered her. She is head down in a posture similiar to that of the Hanged Man of the standard Tarot. She represents someone who looks at the world from a different perspective and what's more is painting it with her multi hued-paint brush.

She has a fully-open third eye which indicates that she is operating wisely and intuitively rather than purely rationally or emotionally. (This is a goal for me.)

In accepting the dreamer aspect of myself I am accepting that I do see the world differently to many others, not better or worse, just differently. And I hope that this acceptance will make communication easier!
Posted by Caroline at 2/07/2006 07:06:00 pm

Wow...what detail. I had to read this over more than once so I could grasp everything you were saying. I don't know anything about the Taro, but it all seems very interesting to me. Are you an experienced Taro reader? Why do you like it/believe in it?

Sometimes it is difficult to word the topics to appeal to everyone. Please continue to change the words based on how you feel. I am trying to get across how open I want MMM to be...a community, not just me calling the shots. If you have any suggestions for topics send me a line. Thanks.

Hi Melba - I had difficulty writing it - thank you for taking the time to read it! Tarot is something that has been part of my life for a long time. I don't "believe" in it as such (I don't know what that would mean) but I use it. And I get lots of useful messages by playing with it. Other people have been impressed by my readings for them but mostly I just read for myself.

If you are good at synchronicities and interpreting things or just like to play then cards like this are a natural extension.

Thanks Melba - I know you are hoping to help people not close them down. I'll let you know if any topics suggest themselves to me.

"...the trick is in spotting the difference..." If you can manage that, you'll have this whole 'life' thing sorted :)

I absolutely love, love, love this piece. Everything about it feels good. Colors, balance and your meaning behind it.

Thanks Joy Eliz! Particularly for liking the meaning behind it!

What's amazing about this (besides the visual result) is how you've combined your thought processes with your philosophies, belief systems and unique visual identity to create these collages. It's a total work and as such, the most valuable.

"I accept being myself."

This is such a powerful statement to read and to say aloud. The verb "accept" is very specific, and connotes a lot things for me, mostly positive.

We rarely see this language used in this context. Thank you.

Thanks Andrea! And its obviously opened me up to having discuss all of that too....

Wandering Coyote - you are right "accept" is very specific. For me it was the form with the least judgement or loading attached. This may not be true for you.

It also leaves out "trying" or "intention", which in this case would be wishy-washy.

It was very interesting reading about what was behind this piece.
Thanks for sharing it!
Snowbear