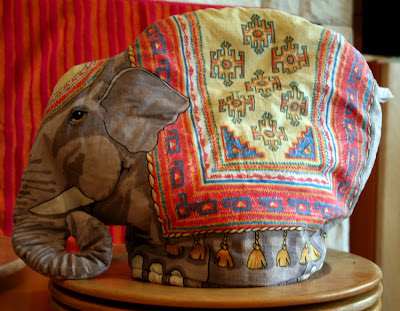 This is an elephant teapot cosy. As I no longer drink tea you could consider this a white elephant - well you could if it was actually valuable! I noticed that we have a tea towel with similar stripes in it as the cosy so I added that into the background.

I tried to get my statue of the Buddha to pose with the cosy on his head, as a hat, but it was too large and made him look more like Ganesh...

So where did this week go?

Well I started off happily posting elephants etc. but then on Thursday we got a call from our builders to say that they'd had an unexpected cancellation and could they come to us on Monday?

As they wanted both one bedroom and the dining room completely empty this meant a great many things to be moved and temporary arrangements to be made, especially as they'd lead me to believe we wouldn't have access to the kitchen!

We could have done with an elephant to carry things for us.

As it is we do still have access to the kitchen... so I'm considering the fact we moved so much stuff out an invitation to spring clean before it all gets put back.

So I've been busy doing things other than blogging, but I have been reading and answering my email. One thread has been about animal totems. We'd got to a point where 4 animals had been identified, one of which was common to both of us - Coyote.

On Sunday I related how I'd found a coyote soft toy about 5 years or so ago.

I was in a charity shop looking at teddy bears for my recently born niece and the volunteer in there said what about this one, holding up a rather odd looking soft toy - it needs a good home - and I said "what is it?" she said "Roadrunner!" (it wasn't a bird) eventually it turned out to be the Coyote from the cartoon Roadrunner...

This is the coyote I got at that time: 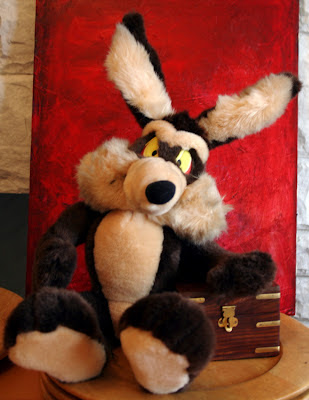 Today this is what happened:

I was out at my local shops and noticed several children carrying soft toys - I don't mean that this is unusual but I was particularly drawn to the fact. Even to the extent where I ended up talking to a stranger in the local coffee shop to find out what type of animal it was that her baby had (that one was a monkey).

I carried on and did my shopping and then as I passed a charity shop (we have loads locally) I noticed how many ordinary teddy bears they had in their window - so I went in.

I went straight to their soft toy section and found... a coyote!

I took it to the counter and said "Who's this?"

And she said "Road Runner!"

"Oh its Wily Coyote" she said.

This was a different shop and different woman from the time before. Its also a slightly different make from mine. 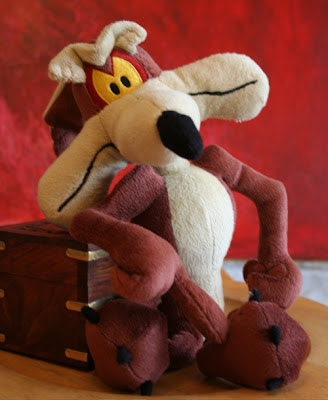 I have, of course, offered him to my email correspondent.

On Saturday I'll be joining in with the Finding Water group so my weeks will have names from Julia Cameron once more. Until then I'm considering myself as having a Spring Clean. (Though if any elephants are involved it will probably be more like a Sprinkling...)

Any tips on Spring Cleaning?

Update: The coyotes decided to sit on three volumes of "The World of Children" to pose for you together: 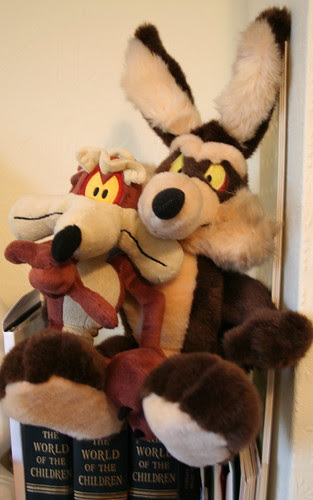 I'd be happy to give you tips on Spring Cleaning if I had any; alas, I only have moving cleaning and that is entirely different (much more goes away). And then don't move (and it all comes back in). What I did do that has been helpful is buy 4 more large bookshelves - I guess it depends on what you keep and what you throw away (and what multiplies like rabbits in the corners when you aren't watching).

Tammy Vitale - ah so my problem is all those rabbits I've not noticed is it? I'd better buy them some bookshelves... actually I don't think there is anywhere left to put a book shelf... some serious throwing out time is required.

Ah - I'm in need of some major cleaning tips myself...I've been visiting the FlyLady site for motivation - don't know if that's any help to you in spring cleaning.

Coyote energy - hmmm, he's always a trickster and something of a shapeshifter as well. Could be that's why neither shopclerk called him by his name. From what I've read, Coyote likes to play, too.

I loved your elephant review. I think I would have liked to have seen Buddha masquerading as Ganesha, as his playful side doesn't get much publicity.
"We are all fools, so we might as well dance." Japanese proverb (I think!)
I think Coyote must be playing some tricks on me as I keep having to re-type the word verification - ok third time's a charm!

Terri - it was the trickster side of coyote that made him a really hard guide for me to accept... but in the end I have... he was like a boomerang and kept on coming back... no escaping this one.

I may yet show Buddha as Ganesh you are right the Coyote side of Buddha needs some airing here...

AHHH!! I think LapinPoulain would have fun with those two!!!!!

MP - of course you have that adventurous animal don't you!