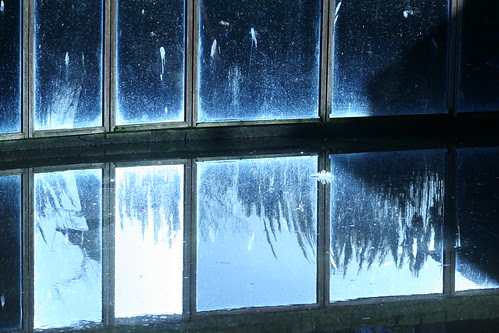 Taken outdoors with camera set to tungsten which gives it the very blue colour cast.

On Saturday the Guardian had a poster of dogs in it. Jim pointed out one in particular, the Spanish Water Dog - neither of us had heard of it before.

That evening I was reading R Is for Ricochet

- the next in the series I've been reading featuring Kinsey Milhone the Californian private eye based in "Santa Theresa" (probably based on Santa Barbara) - which Jim had given me for Christmas so this was the first time I'd read this one - and I got to this passage:

I found myself noting the texture of Cheyney's hair, springy dark brown curls that looked as soft as a poodle's coat. I'm not a dog lover at heart. Doggies tend to bark their bad breath in my face, preparatory to jumping up and parking their cumbersome paws on my chest. Despite numerous sharp commands, most dogs behave any way they please. There's the occasional exception. The week before, in a rare moment of goodwill, I'd stopped to chat with a woman who was walking a breed I'd never seen before. She introduced me to Chandler, a Portuguese water dog who sat on command and gravely offered to shake hands, The dog was quiet and well mannered with a coat so curly and soft I could hardly keep my hands to myself. Why was I thinking about that now? ....

Good question... and no further mention has been made of any sort of water dog so far in the book...

So I then spend some time researching water dogs of the Spanish and Portuguese varieties... one of my dreams is to have a dog again... I've not had one since I left home and went out into the big wild world... one of my dreams is that when we move into the country we'll also get a dog.... not that there is any chance of moving for a while yet... maybe in a year or two...

Another synchronicity is that R is for Ricochet has a pink rose on the cover... and my pink rose is continuing its unseasonal bloom.

Oh and at one point in the book a false passport is found with my married surname!

I've no idea what this is about... maybe nothing... just the universe having fun...

If you know anything about either type of water dog please tell me about them!

I have met a couple of Portuguese Water Dogs and was impressed by their beauty and intelligence. I didn't know there was a Spanish version! They're a little like Standard Poodles, also awesome dogs.

There's a bit of a fallacy about dogs and space. Dogs with responsible owners usually do better in a city environment than a country environment, despite popular 'wisdom' that says dogs belong in the country. Dogs *actually* belong with their pack (read: people) and are more likely to be near them and not left to their own devices when in the city. Also, the regular walks needed when a dog lives in the city improves the bonding/quality of life and ensures that the dog (and its person!) are getting proper exercise. One of the best matches I ever made when fostering Australian Shepherds was with a couple in a downtown highrise in one of the most population-dense neighbourhoods in the world (Vancouver's west end). Dogs in urban England have it better than almost anywhere esle, with your lenient laws regarding dogs in pubs, on transit, etc.

Andrea - From what I've been reading the Spanish type has hair that needs an all over clip (at least once a year) but no weird cuts and no brushing as that spoils its dreadlocks!

The Portuguese one tends to be given a lion clip - very poodle like in that - and needs more grooming I think.

the spanish water dog for me is so cute!

you are one of those lucky ones who can have a pet-i have some allergies....

i have not been reading since end of the year. i hope to buy a book soon!

I've never seen a Spanish nor a Portugese water dog, that I know of - I must google them and see what they look like now.

I'm getting ready to start the 3rd Julia Cameron book, Finding Water, and since reading the AW produced all sorts of synchronicites, maybe this one will as well. Hmm, now that I think about it - there's a bit of synchronicity - water dogs/'Finding Water'!!
Are you going to join the FW group?

Isay - I used to be allergic but was cured by HK...

Excellent photo! I love it!

You (and synchronicity) will be getting an honourable mention in and up-and-coming post of mine. And, interestingly, that post will make reference to an author who writes in Portuguese. So while nothing to do with water dogs, there is a link.

I had been re-reading "The Illuminatus Trilogy" just before I saw "Borat." The passage I had read before I left was about how an alien would think all our customs, manners, and taboos were pointless. If you've seen the movie, you'll see that fits the theme perfectly.

Tony LaRocca - I've not seen Borat but I love the way these things echo. Maybe that's a good theme for one of your rants...

I've had a few of those synchronicity moments with books and real life, I can't think of any right now, but I know I've had them.

A lot of times it happens with me and music...I'd want to hear a song, then suddenly, I'd hear it on the radio.

GG - wanting to hear a song and then it appears on the radio? - that's magical!