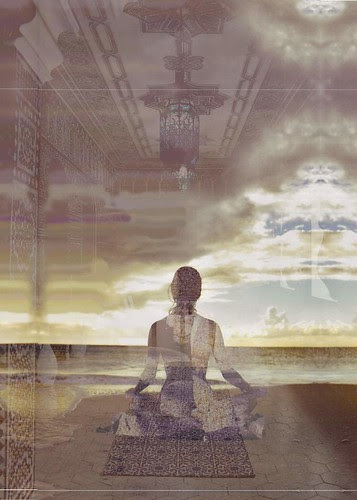 This week has been a busy one. On Wednesday we had Jim's brother and family here. My mother-in-law stayed on for several days. We also had two parties to go to - the second I wasn't able to go to as I'd overdone the dancing at the first! I'd hoped to see my sister at the weekend but hadn't recovered sufficiently; I'm a victim of my greatly improved energy but, as yet, unfit body. Then the book SoulCollage® turned up and it has helped me get back to where I wanted to be - making cards!

I hadn't given myself many exercises to do this week but I kept up my morning pages and my appreciation of synchronicities. (For me the main route to knowing I am connected is through synchronicity.) I also did some creative things with my mother-in-law who used to teach art - that was fun! I forgot to photograph the wedding anniversary cards that we made and they've been given already but imagine copper dragonflies on a green pond and you'll be most of the way there.

Joy Eliz's version of the Hanged Woman turned up at the start of the week too - thank you Joy! Well-timed and very beautiful.

As many of you will be aware I do love synchronicities so making an image to embody this was an early one on my list. (And no I don't really have a list... that was just a figure of speech, I tend to wing these things... maybe I need an image of a Winger...) I felt that I needed to show this by using patterns so I started with lots of images with patterns in but most didn't make it to the final cut. I like the simplicity of this image as it is now. Also I love the way faces appeared when I reflected slices of the picture to fill up the space.

I've already blogged this card today on my Card blog and another, Hurt Body. I like having the cards in a separate blog but I can see there will be a fair degree of repetition of images between blogs.

Here are some fairies my mother-in-law and I made; hers is the one with the crown of beads - mine are the attendants:

I keep my lists mental...otherwise too much time would go toward maintaining these lists - ha!
I love the fairies - Very sweet!

i feel the same way about synchronicity and being connected.

happy new year to you caroline!

Joy Eliz - its the idea of maintaining lists that gets me too - I do occasionally make a list but that's more for the mental processing than anything else! The fairies are cute aren't they - I should've mentioned they were from a kit designed by a 13 year old girl!

Leah - thank you! Was this post in response to my comment on yours? If so you are very quick!

Word veri is going on about Mr Yjak - sounds like a beast to me!

I love your collage, it is so ethereal and many-layered. I could look at it for ages.

HI Zinkibaru - lovely to see you! Thank you - ethereal is a great compliment!

Love this digital image caroline. It has a great overall composition and some imaginative use of images. Do you have Photoshop? I need to get a nice program someday soon hopefully--one that will allow some image manipulation. This is very inspiring and peaceful.

Great image, Caroline!
....sounds like you had a great time dancing. I've not danced in years.....it would probably do me in ,too!

I love these last two images you've created - fantastic work! And dancing 'til you can dance no more sounds like a great way to start the new year to me! :D

Steve - I normally mention Painter IX but forgot this time - I don't have Photoshop but have had in the past. I liked Painter better - you can get a free download of it for a month to see if it suits you - but it is large and a month isn't time to get to know it well!

Janet - thank you - I dance every now and then but I was wearing different shoes... but mostly it was sheer overdoing it that was to blame!

Sqtusqrm - obviously saying do a squart in a square room!

I love the digitally made card - I have Adobe but am so impatient about learning things - I know how to use it well enough to get my photos up on the net, but any kind of manipulation - well, I'm lost (and my own fault for not learning how - I even got a Dummies book for learning and never did...hmmm, wonder what that makes me?). I'll use this as inspiration to try try again!

Tammy - thank you! These huge image manipulation applications do take a lot of learning - it helps to just do a bit at a time and it sounds like you are doing just that!

There is always more to learn.

I love the Soul Collage card! and I'm so glad to see you and Tammy have connected!
The flower fairies are adorable. I'm going to have to find some wooden beads now...

Everytime something happens that feels like 'coincidence' or 'esp' I wonder if it's sychronicity and I remember you :-)