What counts as a synchronicity? 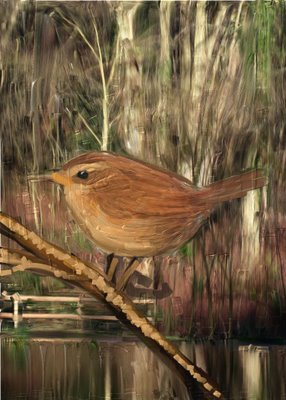 Painting in Painter IX using reference photo for the wren and an oily cloned version of one of my photos for the background.


As I've just created a new suit for synchronicities I was planning a post here about them.

Probably not. There is some element of cause and effect apparent... I have a known soft spot for them...

But there are more than usual... And one was the first comment from cms and his was a great synchronicity - he got Ulysses as his book and his birthday is the day Joyce is celebrated - Bloomsday... And then Jo commented that she got Ulysses too and like cms comes from Hastings...

Okay in that case I'll just take it as encouragement to continue this post about them.

Sometime ago Ian asked in a comment - What counts as a synchronicity?

And was it still one if goes unnoticed.

Jung is credited as having coined the word Synchronicity and wrote an essay entitled:
"Synchronicity, An Acausal Connecting Principle" (which I have not read). They grew out of his experience of meaningful coincidences - ones which did not have an obvious cause and effect. Some good examples are available on the web for instance the golden scarab story.

A synchronicity is only a synchronicity in the mind of the observer, so if it goes totally unnoticed then it is not one. However you can be reminded of them, like dreams they can be brought to your notice over the course of a day. Or indeed they can come up as you write a post to your blog...

When I first started to play with the principle of synchronicity I gave myself the following rationalisation:

Notice that none of this was about what might or might not cause them or how likely in probability terms coincidences are. And it turned out to be a good way to start.

Here is a web of synchronicity that occurred this weekend:

On Saturday Suzie Q posted "Shadows" in which she mentioned that a landrover which had been sitting motionless on her drive for 2 years had finally gone to a good home. I had just been reading in Q Is for Quarry

(note the Q... I didn't notice that one until later.. and even later (after posting the first time) I realised that as the author is called Sue and is doing the whole alphabet, one could say this was Sue's Q...) about riding in a very beat up jeep for the protagonist's first view of the quarry... however in looking for this to quote I found this a few pages earlier:

These leap out at me now... because what I connected Suzie Q's landrover to was that on Friday the 12th Jan an old friend of mine had finally turned up to sort out some things she'd left with us around 9 years ago! On Friday the 19th a carrier arrived to take away the three boxes she wanted shipping to her. My old friend's name is Susie...

Then on Sunday I took a photograph inspired by Suzie Q's shadows picture after which I got my boots (and trousers) very muddy... (see my flickr set commemorating this adventure).

N was forced to do something about the toothache he’s been complaining about on & off since October (!) and went off to an emergency dentist to get some antibiotics for the infection that had become obvious by his swollen face on Friday morning.

To which I gaily retorted:

I’m amazed that anyone can ignore a toothache for 3 months! That’s impressive. Mind you the book in which the landrover has just come up also had a passage just around then about being phobic about dentists… I do hope that is not a synchronicity for me! Argh!

I was worrying that maybe I'd get toothache. But no, what came up was all that mud... as we picked and squelched our way through the muddy morass that was once a public footpath, an old phobia surfaced.

I used to have nightmares of being stuck, unable to walk or run over the gravel we had outside. I'd since read about sleep paralysis and rationalised it all away... and conveniently forgotten about another phobic experience over 10 years ago of being scared stiff trying to cross mud with someone who has really nasty about it... luckily Jim was not... and in the end we did only a minor variation on the originally planned 3.5 mile walk.

I've been gathering more evidence on my 'orange synchronicity' to prove to you that my work place is REALLY orange! Once the light is better for my poor camera phone to do justice to the orangeness, I'll post the evidence

Hmmmm experiments with synchronicity. I enjoy the excitment when it happens. Although can be a bit freaky if it's all the time for many days in a row, plus exhausting.

your wren is beautiful!

when i think of synchronicity, i think of milli vanilli and war movies, (where men would synchronize their watches on "my mark.")

Reluctant Nomad (or re- octant as the spelling checker bizzarely suggested..) - I hope you are enjoying all this orange. I'm looking forward to seeing just how orange it all is.

Anonymous - experiments? More like observations in this case... a distinction probably only interesting to a pedant! Yes they certainly can be exhausting, especially when being forced to confront worst nightmares... glad you like my wren!

Catnapping - and thank you for more wren appreciation! Synchronizing on purpose... that's an interesting variation. Thanks for adding that into the mix...

I've always thought of synchronicity as grace, and that if I just pay attention, I'll see it all around.

Sleep paralysis: never heard of that but have heard that this phenom is actually out of body experience, when the traveling body is trying to return to the corporal body...I like that one better.

Tammy Vitale - yes it is grace - nice way to think of it.

Given how nightmarish those nightmares were I think OOBs are an even scarier explanation.

Oh my, those were some strange & fascinating synchronicites, about the Landrover & Susie and the length of time...I'm so glad that the dentist thing didn't materialise as anything more sinister than mud! :)
I used to read Jung a lot, for fun! He says a lot that makes sense to me and appeals to me.
I LOVE the wren picture, and recognise your gorgeous photograph in the background. You did a great job with painter :)
I think I may be on the lookout for more synchronicity in my life after reading this post. I'll let you know...

Suzie - mud is quite bad enough... but I've had lots more synchronicities since around children with teeth missing... may not be through with this one yet...