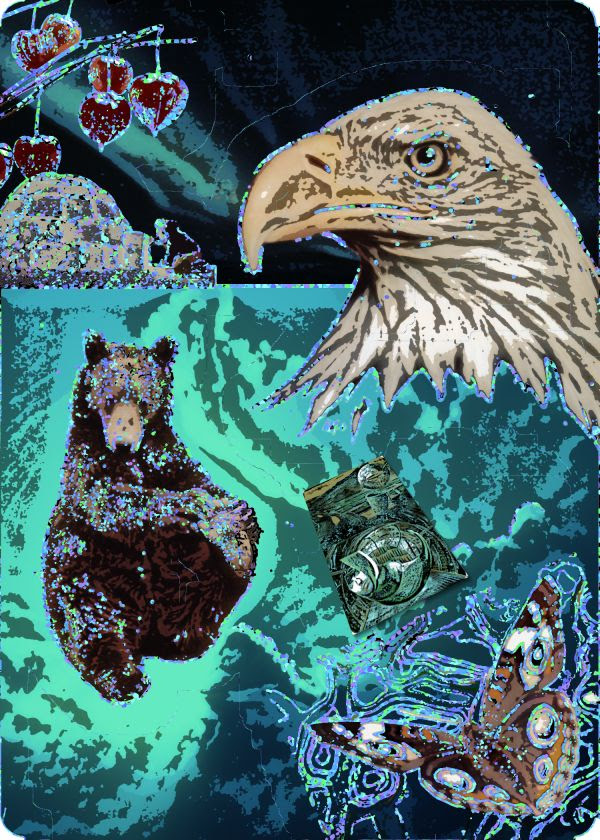 In December I replied to a posting by Andrea where she offered 5 pieces of art to the first five people who replied and were willing to also offer 5 pieces on their blogs.

I got two responses to my first posting and two to my second. (Though I've yet to get addresses to which to send them from two of these people.) Joy Eliz negotiated a swap with me instead of offering five. And so far none of the others have offered five on their blogs yet...(have you?) so I thought it would be worth doing a rule change and saying straight out that its up to you whether or not you keep the tag going, no pressure from me at all.

I knew I needed to. I've been blocked with respect to actually making art for people. At the time I thought I'd get around this by making 5 things before offering. However then I got into this Soul Collaging and things have changed. I don't want to send out just any old bit of work to anyone. I do want to make them especially. And although they aren't sent yet I've done four SoulCollage® cards for the four takers. Just in case you don't know who you are, you are: Tinker, JohnnyNorms, Joy Eliz, Leah. Thank you to all four of you for your support - it really was and is appreciated!

The picture above is the one that is left. The fifth piece. And its for whoever tells me they want it AND sends me their address - whether or not they plan to offer 5 pieces of art on their blogs.

As I don't know who will get it, its not a soul collage card. So I based it on medicine animals and symbols. It contains:
As I've already got both Andrea's piece and Joy's swap piece its time I sent mine off!

Well, I would, because this is beautiful but I'm already one of the lucky original recipients - and horrid person who totally forgot to offer five pieces myself! OK now I need to go make something - yikes! Or did you just let me off the hook? I still want to make something for you at least - if I can ever get of my duff and make anything right now.
Hope you had a lovely weekend.

Terri / Tinker - thank you - and yes I have just let you off the hook if that's what you want! I've spent almost all weekend making art so its been wonderful!

This is very cool, C. BTW I noticed that takers of my art were also forgetting to do the same on their blogs and was sorely tempted to wag my finger at them, but decided to let it go. A couple of those people haven't even let me know the art arrived! In the end I put it down to my December charitable donations ... but it was kind of disappointing. Come to think of it I never got the piece of art that started this either!

Andrea - I think you are within your rights to ask for the art you were promised, or at least to mention that it hasn't arrived yet... it could have got lost in the post. I'm very grateful to you for the piece you sent me - thank you!

My five up-for-grabs coming soon. Was going to fish out all older things, but then felt the desire to include one or two new pieces. Looking forward to yours through the post, Caro - sorry I didn't send address before.

JohnnyNorms - I'd love to have one of your five but I don't think I could stand the strain of doing another 5 to give away just yet! Thanks for the address.