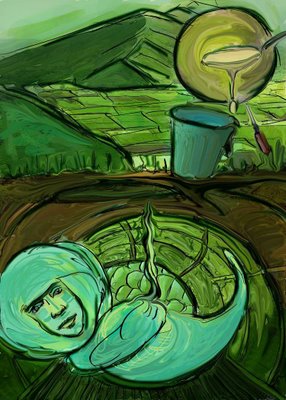 Drawing / painting in Painter IX from collage of photographs


This week has been one of making cards and more cards. I am now up to 45 cards which is enough to begin to do readings with and from tomorrow I hope to be doing just that... if I've managed to back all my prints outs with card board between now and then!

The image above is one that I made by drawing and painting, in Painter IX, using one of the cards as inspiration. It was called unnamed1 until I realised that it should really be called "The Unnamed One"; because it is a picture of some sort of being that has yet to emerge and its not usual to name things until they are born.

The major element of compassion that we have shown ourselves is finally ordering a new bed! Yippee!

The other major occupation that I started this week was rereading my journals / morning pages / doodles. This is taking a lot of time and will have to been carried over into next week too.

The main thing I always gain from this is tremendous compassion for the person who wrote so innocently not realising what would happen next; hopes, dreams and fears.

For instance the innocent who thought that ringing an emergency builder would produce one the next day... hah!

Or who worried about what to wear for something that eventually she didn't get to go to. Etc.

With hindsight its so much easier to be kind to oneself and tell oneself not to worry - even the not so good things are never so bad after a week of good nights of sleep - and if you are waiting for an emergency builder you might as well sleep through it.

Imperial Majesty Caroline the Ceaseless of Goosnargh on the Carpet, it would be my absolute pleasure to attend your coronation! Just after I've checked out all 45 cards that you've made! ;)
Have a great day,
Empress Suzie Q, etc. (can't remember now!)
Hope that builder turns up soon, or it will be 'off with his head'! ;)

The Imperial Majesty Caroline the Ceaseless of Goosnargh on the Carpet thanks the Empress Suzie Q the Erudite of Melbury Bubblewick for her comment. And asks her to sharpen the axe...

This is beautiful and nicely composed Caroline. Compassion for one's self seems to be the most difficult thing for most people probably. I think we can be pretty harsh on ourselves. I used to keep a written journal and found it interesting that most of the writing was done at my worst times. A couple years ago I got out of a near three year relationship with a girl. For a year afterwards I wrote a lot, as therapy I guess, and looking back at them now makes me crings. I haven't writen at all for a year and ended up destroying that journal-- I guess as a means of finally moving on and embracing a much happier state of mind. I guess in a way that could be self-compassion?

I used journaling that way to get over a relationship too - in those days I definitely associated journal keeping with being unhappy - now it is much happier!

And yes it is theraputic - the trick for me was realising that I could go on sorting stuff out for myself through writing and doodling in a book that no-one else sees whilst in a good state.

Having redone the AW has increased the volume considerably!

Which is why re-reading is taking a lot longer than usual...

The blue green colors and lines in The UnNamed One are lovely. This makes me think of a seed, waiting for spring, ready to burst forth into new life. I've been enjoying perusing the SoulCollage a little each night - letting it soak in a bit before jumping in.
Can't wait to see what new title you come up with for tomorrow.
Btw, I just found the Peculiar Aristocratic Title generator on another site, and discovered I am the Most Noble Lady Tinker the Sophisticated of Leighton Buzzard - I had no idea I was at all sophisticated, so I was quite thrilled by that, your Imperial Majesty - so unsophisticated that I'm not sure about protocol - must I curtsy now when visiting your site? :)

Tinker - I'm beginning to see this card as an idea that is currently growing in the not so consciousness, it needs the odd spoonful of goodness to keep it going though as yet there is no visible sign. Thanks for helping me to this insight Most Noble Lady Tinker etc. Don't worry about the curtsy - I'm not so good at returning them - though maybe I should do that - get up and do a little yoga type curtsy whenever I read someone's comments or visit their sight - ah ha a possible new title "Yoga for Bloggers based on Court Etiquette" hmm... not particularly catchy...

I wonder if sight for site was significant or just shows its way past my bedtime... night night!

It's interesting watching you work through the Artist's Way. I don't know what it is, but I have no compunction to do the programme. Maybe one day when I have fewer demands on my time. I do love watching it roll out while you tackle it, though.

Andrea - the artist's way may not be for you, maybe that's why you are not drawn to it. I suspect it, in its original form, has more to say to people who are more blocked as artists than you are!

Way to go Caro! I'm not into Tarot myself, but I sure like the imagery and design of the cards, and I certainly like the design of yours that I've seen.
Great composition for the Unborn One, I love the shades of colour.

A new bed? You won't know yourselves!!

JN - thank you - mine are not very standard tarot and becoming even less so - but then that's part of the fun isn't it!

RN - I hope it'll be good... the mattress is arriving on Friday but the frame isn't coming until a week later!

Sounds like a very 're-newing' week - Good for you!
And I am somehow drawn to your painting... The green color... very soothing.

Andrea - hi there and thank you!