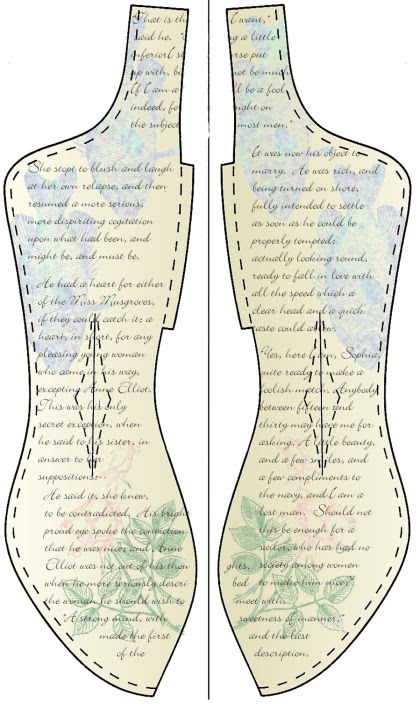 Digitally created pattern for the back of a possible doll. For the complete pattern see doll 3 in Creative Cloth Doll Making by Patti Medaris Cuela. (My first doll, that I posted about on Saturday, also came from this book)

I was working on this design for the next doll's back and had got to the point where I was experimenting with adding some fish when the doorbell went and when I opened it the chap there said he was "Steve the fish man"... As my ex-husband was called Steve I don't really want to make a doll called Steve! And I had already mentally been calling her Coral...

I'd also picked a couple of passages from Jane Austen's Persuasion to use as text on the body... one of them was:

"She stopt to blush and laugh at her own relapse, and then resumed a more serious, more dispiriting cogitation upon what had been, and might be, and must be."

And the other a much longer passage that starts:

"It was now his object to marry. He was rich, and being turned on shore, fully intended to settle as soon as he could be properly tempted; actually looking round, ready to fall in love with all the speed which a clear head and a quick taste could allow...."

I had it all ready to print out to see how well it worked as material when I discovered that I'd bought the wrong type of cotton sheet to go through the printer - I'd got one that was meant to be ironed onto something else. So my experiment will have to wait until I've got hold of the right sort. Maybe by the time that comes I'll have decided on a different design altogether... I do feel that Jane Austen was influencing my design a lot here.
Posted by Caroline at 5/25/2006 12:16:00 pm

Can these dolls be blown up?

What kind of explosion do you have in mind? ;-)

Totally! She is my favorite author and I completely see it in this. I lvoe your idea and can't wait to see your final experiement.
a.

Andrea - she's mine too! If you happen to come back - have you turned commenting off on your blog?

Let me just add my ringside "hear hear!" This is such an original idea that I'm fascinated to watch its process.

Those passages seem very apt given that they come from a time when women were objectified so much and had so little power. Kinda like dolls.

Thanks Andrea - I'm pretty keen to see how well it works out too!

Wandering Coyote - you snuck in there! You are right... maybe that's why they are calling to me.

Caroline,
I love your dolls. They have so much life in them. Beautiful!
XO,
Melba

The dolls are so cool...can't wait to see this one when it is completed.

Also, I have never had anyone show up at my door introducing themselves as "the fish man"...how does one go about that? ;-)

Thats a real nice design - I would like to see the finished product :)

Melba - thank you - I like other doll makers seem to have to bend to the whims of the doll rather than force them to be someone they are not - which is excellent practice for life!

Susanlavonne - from his remarks after that opening line I assume he was selling fish - I've lived here almost 10 years and he's never tried to sell me fish before.

Saddle Up - I've ordered some of the right sort of cloth so the next steps have begun.

Oh, I like the idea of a Jane Austen-printed doll! But no, Steve the Fish-man is not an inspiring name for a Jane Austen doll....

not sure where to answer you so thought I would answer here. it is geronimo. or did you mean 'know' as spirit wise? I liked doing that one because of the lines in his face; wishing I would have spent more time on those

Just a little explosion from the lips..nothing sordid or too noisy! :-)

Tinker - thanks - I was planning on adding in some Shakespeare and Donne as well... get all my classic references into this one doll

What a fascinating project! I love the Jane Austen movies, but (and I can hardly believe this) I have not yet read her books. I've not been blogging much lately...too many irons in the fire...but always enjoy visiting your blog when I am online.

Nan - you have a treat in store! They are books that I can reread over and over. Most other novels are once only for me. If the weather had been better I might not have been blogging so much...