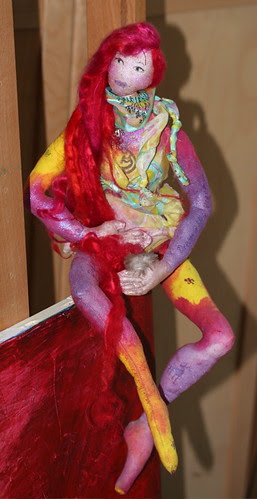 This morning in the post I got an article that my mother-in-law had sent me from one of her local magazines. It was about a group calling themselves The Dolly Birds. My mother-in-law remembered seeing the doll (above) I'd made in 2003 and thought I might be interested to know that there was a doll group somewhere in the UK even if not near me.

This evening there was someone at our door. It was a young woman who said, with a lovely accent, that she was a Russian student and to fund herself she was selling Russian goods. So I bought a matryoshka from her. 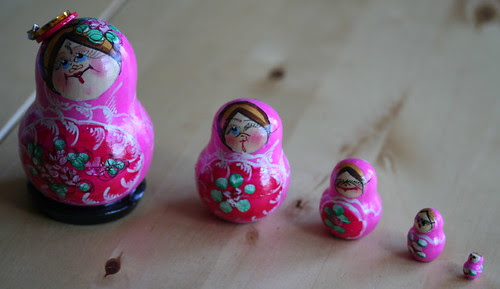 I chose this one as it had different faces on each doll and made me laugh!

Anyone following closely will recall that in February I posted a Mixed Media Memoir with a Russian Doll as part of it. At the time I'd gone looking for one and only found a keyring. She was selling ones like that too.

The other interesting thing today is that in the Guardian I noticed an article about hypnosis and NLP. His conclusion was that he didn't like the way it was being taught but when given a session with Paul McKenna on his own it worked really well. And three weeks later the thing that had been fixed - "[a] somewhat obsessive conviction that something bad has happened to my wife and son when I can't get hold of them on the phone" - is still fixed.

For those of you who read my posting on the one class in hypnosis I'd had three weeks ago today may be glad to know that I've been using self-hypnosis very successfully since then, so although I'm not likely to let anyone else actively use it on me again I am getting plenty of benefits from being able to access the hypnotic state.

Now I'm working on increasing my mindfulness with the help of this book:

Your art doll is beautiful! The nesting dolls are adorable, too. I remember seeing "paint your own" plain wood ones in a craft store, years ago, & now I regret not scratching together the $ to make my own.
Love visiting your blog - there's always something fun to look at here!

Thanks tinker. I'd love a set of paint your own ones - I wonder if they are still made.