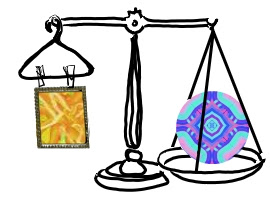 Tagged by Susanlavonne of Soozphotoz. With whom I seem to have got into a strange kind of synchronicity... but this time at least it shouldn't be a surprise as she tagged me...

accent: Red or blue or turquoise - Oh you didn't mean favourite accent colours? Did you mean voice? Well that'll be English without much to show whereabouts I come from, just the odd Gloucestershire word... but here in Bristol the locals put l's on the end of everything... so here any idea is ideal!

booze: generally none, I seem to have gone off it. Though I used to like champagne...

dogs/cats: none, instead we have frogs with lots of tadpoles in our pond

gold/silver: either, both or none... mostly none.

insomnia: I meditate if I can't sleep

living arrangements: I live with my husband

number of sexual partners: just one at a time thank you

overnight hospital stays: none, but only because I refused to check-in the night before and left as soon as I could, mastering crutches up and down stairs faster than the occupational therapist could believe (removal of the scar tissue from the previous removal of a malignant melanoma)

phobia: none any more, I used to have a phobia of going downwards fast (was awful on escalators) but then I made myself learn to downhill ski - not for fun, just to get over the fear

Ignorance is like a delicate exotic fruit; touch it and the bloom is gone. - The Importance of Being Earnest by Oscar Wilde

religion: No religion, but plenty of spirit!

siblings: two brothers and one sister, I'm the eldest

unusual talent: not sure if its a talent but I do attract a lot of synchronicities...

vegetable I refuse to eat: olives - I used to love them, then one day they just started to smell really horrible, and that's continued for 2 years now...

x-rays: loads.... the first ones I remember were those machines in shoe shops where they looked at your feet to see how well the shoes fit... is that true? Were there such machines?

zodiac sign: One of the things that has annoyed me all my life is the assumption that I believe in horoscopes... I'm well aware that lots of people with my interests are also into astrology but I'm not. Since I also do not automatically disbelieve in things either, I have tried it... I got two different people to do charts for me and I was not impressed with the results. And a friend of a friend who earns his living as an astrologer failed to guess my sign at all. A bit of a shame really as I like the characteristics often said to be those for Libra...

You need to get beyond the Barnum/Forer effect... that's the one where you tell someone that they are for instance:

"You have a need for other people to like and admire you, and yet you tend to be critical of yourself. You have considerable unused capacity that you have not turned to your advantage. At times you have serious doubts as to whether you have made the right decision or done the right thing. You also pride yourself as an independent thinker; and do not accept others' statements without satisfactory proof. But you have found it unwise to be too frank in revealing yourself to others. Some of your aspirations tend to be rather unrealistic."

And if you are still reading after that rant at the end, please consider yourself tagged! And if you wish I had tagged you by name, please do feel that I did.
Posted by Caroline at 5/31/2006 11:17:00 am

Ascenderrisesabove - I find it hard to believe I ever liked them - and so many places add them to salads etc. without mentioning it on their menus... yuk!

I really liked the ranting...especially because it is so true.
Thanks for participating! For the most part, I love to tag people with this stuff because it's so interesting to learn more about the folks you "meet" in this virtual realm :-)

I remember first loving, then going off of olives as a kid after having a bad one (had eaten too many of them anyway, at one sitting - putting one on each fingertip to eat - do kids do that everywhere, or is that an American thing?); hated them on principle for years...then about 10 years ago, I accidentally got one in a salad (as you noted, they're everywhere!), and suddenly olives were delicious again. Hope I never get another bad one, though(ick!)
Enjoyed reading your alphabet meme.

Shame on you not liking olives! But thanks for telling me about the Barnum effect. I knew about it but not by name.

As for being tagged, I still haven't spilt the beans yet so I consider myself not tagged just yet.

Susanlavonne - glad you liked the rant... sometimes these things just come out!

Tinker - I didn't like olives when I was a child... when I was at university I weened myself onto them by chopping an olive up very small over pizza or whatever.. but at the moment if I was presented with such a pizza I'd leave the room!

Reluctant Nomad - shame? You have very strange notions about what is shameful! And why should you spill the beans when I'm still failing to interview anyone?

I always wanted to make a cartoon with an evil Melon named Malignant Melanoma, but I don't think Disney would buy it. It was great reading about you.

I like this meme -- quirky and interesting without being too revealing. These things often say more anyway. Love your answer to Z! Now I must check out that link...

I like the idea of pet frogs. Do you put little collars on them? Just kidding. And I'm with you on the olives. Ick blech. I've tried, but I can't seem to stand them. And to answer your question on my blog: "bleachers" are the tiered seating at sporting events. I didn't realize this was an American word -- what do you call this in real English?

Tony - thank you - and though Disney might not take your evil Melon I'm sure someone would...

Andrea - thanks - does that mean you are going to take this tag? No pressure...

Laini - its odd isn't it - I like olive oil but not olives.... and I've no idea what tiered seating is called... um... stadium seating... football seats... seats... but I'd never heard it called bleachers before

You are such a rare, cherished gem! I loved reading this and you should of added a killer sense of humor some where!
a.

Something weird happening with blogger comments there... anyone else get a completely blank word verification field and some unusual fields to fill in?

But you know... I think olives might be a fruit...

I do think spiritual people get labeled. All people do I guess. We lump catergories together. ALL the time at co-workers who would get to know me would say wow I can't believe how spiritual you are because I would wear the appropriate trendy clothes (in my 20's I worked in retail and was single and spent way too much money on clothes!). My style has changed a bit, but it wasn't something I did consciously to fit a mold.

Viking - that would be cool - then I'd have somewhere to spring from to finially do the interview... and I think one can interpret vegetable as in "animal, vegetable or mineral".

Melba - true we do all label and get labelled. Trendy spiritual? That's a fun one.

odd though it may seem, Brits call seating at stadiums ''stands'' - hence grandstand, a large covered area where people sit and watch an event. We're all weird - not just in Bristol.

You've just given me such a good excuse not to spill any beans! Phew!!