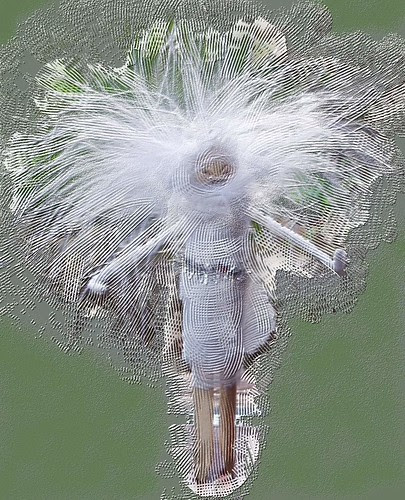 Doll crafted from a peg and scraps of material.
Photo then manipulated in Painter IX

Once upon a time not so very long ago, nor so very far away, but just long enough ago and far enough away to be beyond the reach of you today. Or maybe not. Once in this time there was a girl. She was the apple of her father's eye, the pearl in her mother's oyster, the darling of the whole family and yet...

And to wander off exploring was a going-to-bed-without-any-supper act the first time, a being spanked on the bottom plus a week's worth of no suppers the second time. So you may be surprised to learn that there was a third time. Yet there was.

Peony, for that was the little girl's name had wandered off again, she did not mean to wander off. She was aware that wandering off might bring about the most terrible punishment if she did not return in time to have not been missed. Yet wander she had. She was a daydreamer and did not really notice that she was no longer in her own garden but had crossed the brook and was wandering in the wood beyond. A wood that all told her was full of fairies and everyone knew that if a fairy got hold of a little girl then that little girl would never be seen again.

As she dreamed herself along Peony imagined meeting the fairies and wondered what she would do if they met. And rather than seeing herself being carried away for a year and a day or even a hundred and one years she imagined instead that they offered her three wishes. And these were her wishes:

To always be able to appreciate the world in all its glory - to see it as she did now even when grown up - she knew that none of the adults in her life had this gift and this was to be her first wish.

To have the gift of being able to help whomever she met and that this help would be accepted gladly.

And the third wish was that the fairy itself could have whatever it wished - it seeming so mean to use them all up on herself.

And as she thought these wishes she heard a voice say "Granted".

She went home and she had not been missed. She became a story teller, she learnt to ask her questions in ways that people were happy to hear and to answer in their hearts and deeds. And of course she was always a friend of the fairies having given them what they most desired of all, which was of course to be able to stop offering everyone wishes and to be able to get on with their own lives.

What a great story! It made me smile and snuggle down to read it again!! thank you!

Caroline, that was absolutely delightful - just what i needed to read on a wet and windy sunday ~ hope it's better where you are :-)
Sx

Such a lovely story; it made me smile. Thank you!

it's a trusting soul who gives the fairy the final wish.
wonderful story, caroline.

Megg - thank you - I enjoyed writing this one a lot!

Ascenderrisesabove - thank you - it was a fun one to do - the wishing fairy.

Ian Russell - it was the only way that her wishes were going to be taken as she intended - though of course she didn't know that at the time.

I relate to that little girl! :) Fantastic combination of images in the illustration, too. Thanks for the happy Sunday wake=up call.

Great story! I like how she used her final wish!
Sad that she couldn't explore....we were fortunate to grow up in a time and place, where we could explore to our hearts content....as long as we were home by dark.

Andrea - thanks - glad to have written you a story to wake up to. I relate to that little girl rather a lot too... I'd like to have had her wishes...

Janet - thank you - I got to explore a lot in that way, physically, but there were still strong signs that said things like "girls aren't good at maths" etc. But in my case that tended to ensure I proved them wrong, however there were plenty of other girls who believed what they were told.

That was the sort of story that makes you go all warm and fuzzy inside.

You seem to have been very prolific of late - good!!

Your story is so lovely and inspirational. I'm so happy you told us Peony's story.

Joy Eliz - I had to write one which really was!

Reluctant Nomad - glad you got a good feeling from it - I've had a burst of blogging yes... you never know how long these spells might last - depends on who cast it I guess... ;-)

I love this story...and it was written so well you can just hear someone reading or telling it to you aloud.
And the illustration is AWESOME!

Great story! It's one I'm going to share with my daughter.

I loved this story! There were so many delights in here. Best twist of all: for once the fairies got a wish! Your tale made me smile all the way from the inside out :>)

Oh, and I love the doll image as well!

susanlavonne - thank you - I was imagining it being read aloud! And thanks for the compliment on my picture - little wishing fairy who does grant wishes of course!

Boliyou - now that is a compliment!

Tinker, twice - getting these sompliments is making me smile too - thank you thank you!

Delightful, lovely story...who knew you were a writer to boot!
Such a mulit talented woman you are.
Loved reading this.
a.

Andrea - that's the problem always getting booted when I write ;-) Well I certainly wasn't my English teacher's favourite... I got told off for using such classic lines as:

And then she woke up.

Charming story. The first wish is one that my wife wished for me on my birthday the year before she married. She's like that always noticing beautiful things that I never used to see. But it's slowly beginning to rub off on me.

Papyrus - its great to share a gift like that! Jim and I both notice different things so open each others eyes to more than either would see alone.