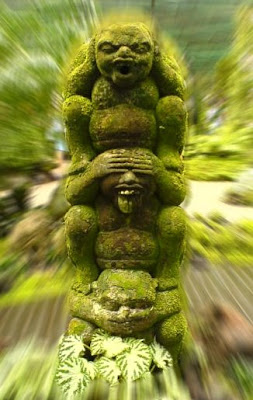 I love collaborating with other people like iwadesu. She isn't someone I've met and I've not used any of her photos before (at least I don't think so) but she was kind enough to put this image on flickr with a creative commons license that allows reuse and manipulation which means when I searched for something to show hear no, see no, speak no evil hers was one of the images to come up. This sort of loose association of collaborators is one I really appreciate and one of the reasons why I like flickr so much. Most, though not all, of my flickr images are available for others to play with too and are some of my most popular images.

Well there is my husband - he and I do quite a lot of things together, some of them creative. Right now he is in the process of writing Teasel's dog blog. We planned to do this in "real time" but somehow it didn't happen and he's been busily posting back-dated entries and is currently up to mid-December last year. He keeps a diary and has relied on that. I'd taken lots of photos (and he's taken some too) and many of those are in there.

Today I bumped into an old work colleague... he's someone I enjoyed working with though we didn't do much together. He now has his own business called Business with Heart - what a great name! His presence in my day reminded me that once I used to really enjoy the people aspect of my work life.

However with art work its not been the same. I've attempted twice to share studio space and found both times that it was disastrous for my creative output. This may be something to do with my needing to avoid words too much when I'm in picture space. And the converse that talking shifts me out of picture space...

But I really get a lot out of the way we all spark ideas in each other via our blogs. Yesterday Leah of Creative Every Day mentioned Angel cards - I thought of these, the Angel cards that are available separately but also as part of the Transformation Game. I decided I needed to play it:

Normally one plays it with other people but I've also got the Solo version and I've adapted that to play in other ways too. Yesterday I played it with 2 hands - my conscious self and my dream self. It was amazing - I love the things that come up through playing it though I won't bore you with details!

Last week Kathryn, Collage Diva, called this process of sparking ideas back and forth the Inspiration Spiral. I love that name.

Wow i've made Caro's Lines how exciting. Yes it was a day of serendipity - wandering along the Gloucester Road on my birthday avoiding doing anything sensible - just relaxing. By chance I bumped into a few people, the sort of people you can chat to as if no time has gone by. Yes Caro
you are such a person...
Ive flocked your blog btw so I will
be following your lines with interest.Steve

Stephen - Happy Birthday! I wish I'd known! (Flock doesn't work on this mac - its too out of date...) It was fun to see you again.

Oh why did you include Teasel's blog link in this post? :) I went there and my brain went all mushy. How absolutely adorable is he?

I have had similar experiences with creative collaborations. They started with great intentions, then fizzled into... I don't even know. :)

Genie - she is a sweetie isn't she! And Jim told me off for linking to it too because its not up to date yet...

This is a great post -- full of snippets of info for the nosy like me and interesting photos and reflections. Love Teasel's blog!

To me it real quite amazing how many are out there with positive energy to gain from.
One most open their mind and heart.

I have to say at this time I'm real uncomfortable with a business partnership I've know and seen where it sucked the life out each of the owners.
I never been involved with a creative partnership yet.

I know there all types of card but I never heard or seen your Transformation cards. I do a reading of inter self around the new moon of each month.

I have never heard of or seen this game before. It is quite intriguing.I would love to know more about it. Teasel is adorable, especially in the jacket:)

PS-I started having trouble with the comments as well-glad to see you made it on Weds:)

Andrea - I'm glad your nose got a good twitching! Teasel's twitches enchantingly too...

PeppyLady - energy can definitely be sucked as well as gained - it is important to get it right. The Transformation Game is played at Findhorn (or at least it was, I don't know if it still is) as part of their communal living process.

Lissa - I'll do a post about the Transformation Game - its wonderful for people who like doing readings and being immersed in the process. Its also great to play with others - collaboratively...
She does look sweet in jackets but she really isn't keen on them - sometimes we've had to wait until she is all shivery before she'll accept it.

Thanks for this post. And yes, that whole thing around finding positive collaboration in business is so tricky. But I have had it work out a couple of times. It really needs to be the right person, though, and yes it is a huge risk of time and energy and often money!!!

Interesting manipulation of the photo - I feel like the statue is rushing towards me - or vice versa...
Looking forward to reading Teasel's blog!

WildHeart - Finding the right person at the right time is the key - lets work on manifesting them in our lives.

Tinker - thanks - looking at it now I think I must have seen them as on a sort of roller coaster with one of them choosing not to hear, another choosing not to look and the last attempting not to scream!

mm, i love the idea of inspiration spirals. spirals in general make me happy. that snail necklace is awesome!!

Such an inspiring post! Online collaborations are a bit like working from home, as opposed to the office you just have to get on with it, and you don't have to worry about other things like how you look and what mood you are in that day etc.

I love the speak no evil see no evil photo. I painted of my take on the three wise people.

Hi! Thanks so much for visiting my blog, and leaving that lovely comment about the glitter. I never thought of it that way, but it sure does have a way of invoking joy! :)

Your blog is wonderful. In addition to these beautiful pictures, I really like the tabs you made in the book. Neat idea!