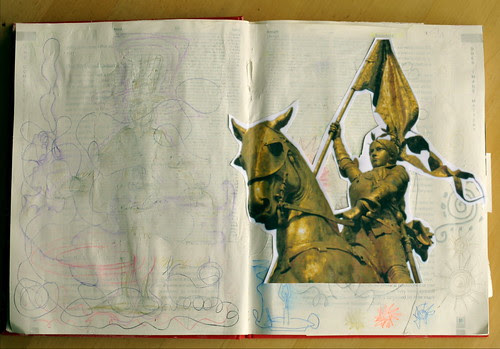 Suit of Armour, featuring pwbaker's girl warrior of the 15th century
with a creative commons license that allows alteration.
We are onto chapter 6 of Gail McMeekin's "12 Secrets of Highly Creative Women" hosted by Jamie Ridler.

This chapter is about Conquering Saboteurs - and what better for that than a protective golden suit of armour! This is a partially completed page from my SoulJournal done in response to the 3rd day of Soul Journaling prompts from Sarah Whitmire which is about our critics, both internal and external, and building some protection for ourselves from them.

I started working on these prompts last week but was struggling to find suitable armour. On Saturday Radio 4 had a play about Joan of Arc and I thought that I might try a search based on her... I love searching through flickr using the advanced search so that I only find images which are available for manipulation - but you need some idea of what to look for!

The Soul Journalling has been inspired by some of you - thank you!

I love mixed media work and have had a couple of goes at altering books. I'm loving playing with these prompts in what was once a Colour Me Beautiful Style Guide book and is becoming my own Soul Journal!

Last week I was inspired to re-organise my art materials after watching Art by Chrysti's video tour of her studio. I did a lot of sorting out but I realised I was rather short of storage furniture. So imagine my joy at finding these outside someone's house with a sign on them saying "please take".

Jim was kind enough to collect and install them for me - Thank you Jim!

They fit into a previously unused space and are perfect for my paints.

Chrysti has been doing a whole series of Giveaways, the most recent was Day 21 of the planned 29. That one is open until February 20th, 2009. And she has the rest of the 29 yet to post. So do check out her blog.

Another freebie I was lucky enough to benefit from was on Thursday... Bristol Zoo were celebrating Darwin's 200th birthday by offering free admission to anyone sporting a beard - whether real or fake.

Of course that did mean I, and lots of others, had to wear a beard to gain our free entry: 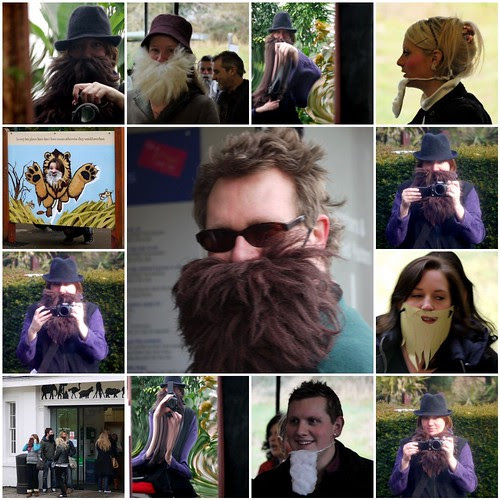 The centre photo is of Jim wearing the beard he uses when playing bass when the band he is in covers ZZ Top's "Sharp Dressed Man" - their band is called the Macaroni Penguins - so here you see a penguin, in a beard, at the zoo.

There are six photos around the edge of me which also involve the same beard.

Teasel, being a dog, is not allowed into the zoo (they don't even allow assistance dogs in which must be rather hard on those that rely on them) so Jim and I took it in turns to wear the beard and go into the zoo whilst the other took Teasel for a walk nearby.

The interview this week seemed extra-specially relevant to me too - I take my camera out the way Andrea Scher describes and love seeing my local neighbourhood in a new way daily both with and without my dog! Being grounded by what is around me really helps when I'm feeling that I'm going through a low of any kind and is something I tend to enjoy doing whether I'm feeling "creative" or not. I don't worry about whether my photos are any good whilst I take them - then I'm in the moment and attempting to capture some aspect of it. Whether I have or not doesn't really matter.

Here are some of the things I've photographed locally recently: 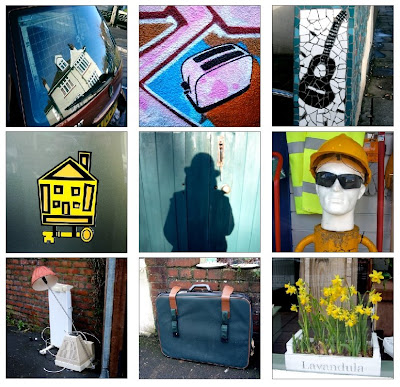 My eye is drawn to quirky things - like the daffodils labelled as Lavendula! And you really wouldn't believe the number of suitcases that have been put out on the streets recently.

This post has taken me so long to write that I've already altered the armour a bit - here is a close-up: 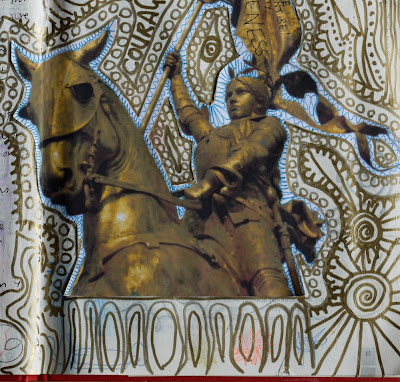 I really enjoyed your Joan of Arc theme & of course your photography. This week was it was a pleasure getting to see the bearded lady (you!).

Love your photos! Especially the reflected building and the silhouette!

The Joan of Arc mixed media is truly powerful!

Love the Joan of Arc, patron saint of "Do It Anyways"! Your photos are really great too, enjoyed seeing them.

Love the photos but I can't believe that you found that shelf wow.

Wonderful suit of golden armor!
I love the idea of the 'beard day' at the zoo - and a bearded penguin! Are any of those other bearded people, you in disguise? And did Teasel see the two of you wearing it? I remember a couple of our dogs through the years, could be quite spooked if we even put on a hat - with all the fuss they made over just a hat, I can only imagine how they would have reacted to us putting on beards, lol.
Wonderful found shelving too! What good things you've been finding behind and in front of the camera - and what fun you must be having finding them all!

Lissa - I've always enjoyed dressing up but this was my first time with a beard!

Genie Sea - those two photos were when there was some especially great sunlight... not a common commodity recently...

JulieZS - Thank you very much - I'm so glad I didn't settle for the wrong suit of armour!

creativehealinggoddess - its a custom around here to leave things out for others to take - but this was my best find by far and very timely!

Tinker - Teasel kept on trying to bite the beard! My hat means we are going out for a walk so she likes that...

Today, I've learned to daily become the creative woman imprinted upon my soul!

hi,
close up of joan of arc image looks great.