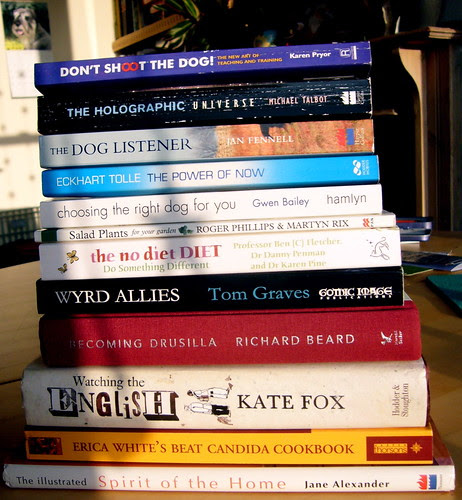 This post has taken me over a week to write! Who knew it would be so hard...

I started out by narrowing down the books I've read in 2008 to the 12 most influential on me over the whole year. They don't fit neatly into months but 12 still seemed like a good number. 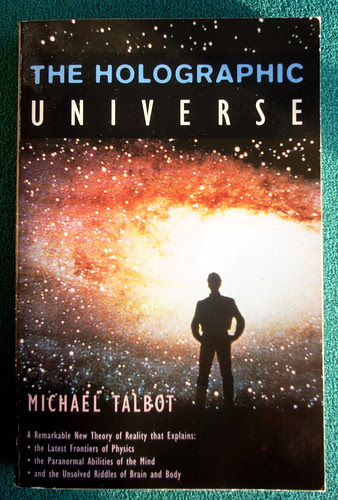 I blogged reading this book in January.

I like the way The Holographic Universe helps me think about reality in a scientific sort of way that also happens to allow (maybe even explain) some of the weird stuff that I actually experience.

Weird stuff that all too often is rejected out of hand by "scientists". I put that in quotes since in my experience real scientists don't reject evidence, but plenty of people attempting to seem scientific will reject anything that doesn't fit with what they perceive to be the accepted scientific world view.

Luckily there have been people throughout history that, having noticed that whatever the current orthodoxy is doesn't fit with their own observations, have been brave enough to investigate - indeed many well-known scientists were such revolutionary thinkers e.g. Galileo & Darwin. 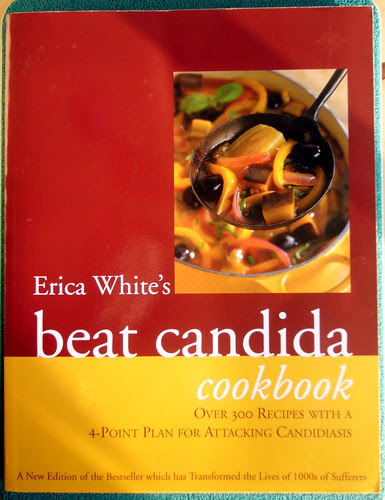 I didn't have this book, Erica White's beat candida cookbook, at the start of the year but I wish I had!

Talking of scientific orthodoxy - its the orthodox view that only people with severe immune problems (e.g. HIV/AIDS) are at serious risk from Candida overgrowth. Luckily in the alternative health world there are people who have experimented with how to reduce candidiasis in otherwise healthy people. This book is the consequence of such work.

My new year's resolution last year was to give up sugar and I did. One of the consequences of this was getting terrible insomnia and almighty aches and pains. It was only when I got this book that I even realised there might be a connection between having given up sugar and getting these problems and that they could be a consequence of Candida die-off. The insomnia in particular reduced my ability to think, I hope I'd have understood sooner if I'd been a little less tired! Though in that case I might have been tempted to go back to consuming sugar...

I'd had two main reasons for wishing to remove sugar from my diet - the first was that one of my aunts became diabetic and I'd rather not, the second was that I was suspicious that I had candidiasis which mostly manifested as a very white tongue in the mornings.

Luckily I stuck with it and am now both sugar free, pain free and pink-tongued. I now only get a white tongue if I have refined carbohydrates (e.g. white flour) or fruit. I haven't followed Erica White's advice entirely so I may yet have to go through some more Candida die-off... I really hope I don't... but if it happens at least I won't be wondering why.

I blogged enough about Wyrd Allies at the time. 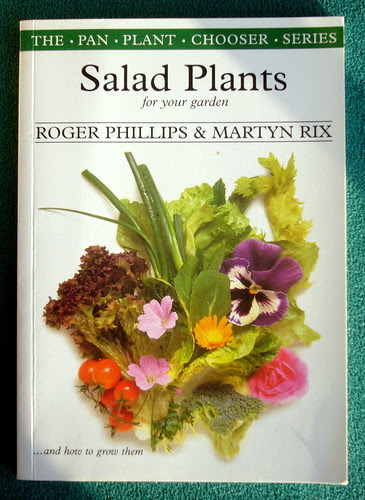 Salad Plants: Jim and I spent a lot of time growing vegetables this year. In previous years we'd simply grown salad leaves and these were the most successful of the things we grew this year too.

If you have a windowsill to spare buy a packet of mixed salad leaves and plant them in a trough - water them enough (but don't waterlog them) and you are almost bound to succeed. (Windowsills are good because they tend not to host slugs or snails.)

We thought we were doing well with our tomato crop - indeed we ate quite a few - but the summer was so wet that we ended up with blight and had to remove the plants without harvesting most of the fruit. 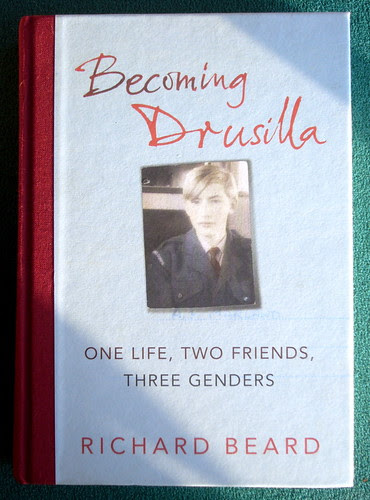 Becoming Drusilla: Dru has a blog and is an active member of flickr.

This book was written about her and their changing relationship by her friend Richard Beard.

I thought it very interesting, thought-provoking and beautifully written.

It is also a travel book as it describes a hike through Wales. 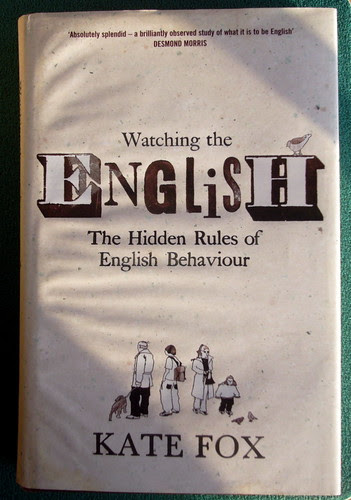 Watching the English: Kate Fox is an anthropologist who has stayed home to observe the people and culture that surrounds her.

Its full of remarks about this or that in one's vocabulary marks one out as upper/ middle / working class... or even more precisely in some cases. Making fine distinctions between middle middle and middle lower or middle upper for instance.

For instance what do you call the large upholstered object upon which two or more people might sit and in which room is it?

My mother was far more class conscious than I am, I think. For instance we were only allowed to call her Mummy, not Mum. The word toilet was strongly discouraged in favour of lavatory and I moved to calling it a loo as I grew up.

Reading this book helped me get a bit more of a grip on the cultural programming that my childhood had subjected me to. And helped free me from some of the prejudices that came with it.

Poor Kate Fox admits she will not have drink mats or coasters in her house as these are such a non-U thing to have - she even had to claim her table surfaces weren't worth protecting... I happily admit to having lots - indeed it helped me realise I seem to collect them! Maybe I'll photograph some soon... 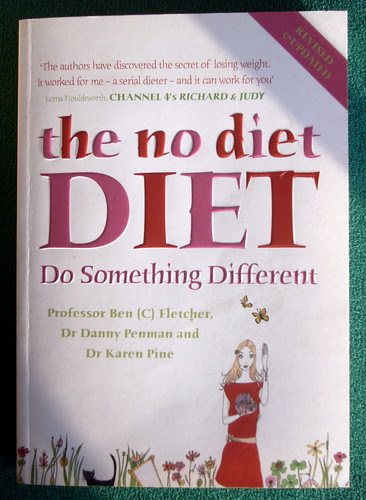 The No Diet Diet has easily been the most influential book of 2008 for me. And I've posted a lot about it. The copy on the right is a more recent edition I found recently - it is very interesting as they include more case studies in it. However the original is more widely available and the version that I followed.

I'm now over 20 pounds lighter than when I started and still doing things differently.

You might think some of the weight loss would be due to having given up sugar.

I'd certainly hoped, when I gave sugar up in January 2008, that one of the consequences would be weight loss. However in August when I started the no diet diet I'd already been avoiding sugar for over 7 months and was exactly the same weight that I'd been when I'd started the year. 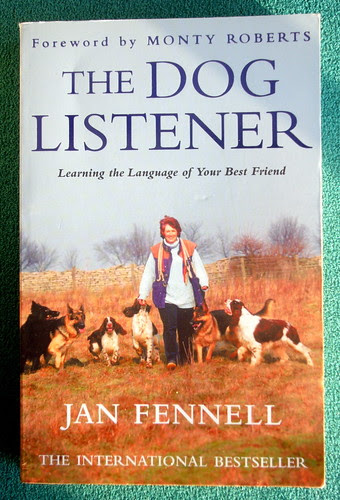 The Dog Listener: Whilst actively following the initial four weeks of the No Diet Diet I started to walk around the neighbourhood more.

I confronted my long held desire to own a dog with my also long held thought that this would only be possible if I lived in the country.

I realised there were certain aspects of dog ownership that I needed to rethink. In particular, living in the city I wanted a smaller dog than if I'd been in the country. I must confess this is, in part, due to the need to pick up the dog's poo - something I'd never had to do when living in the country as a child.

Reading The Dog Listener also introduced me to current ideas of positive training and staying calm and assertive around dogs. It was the first of a whole stack of dog books that I read before and since getting Teasel.

This blog and especially my flickr stream is still reeling from the impact! 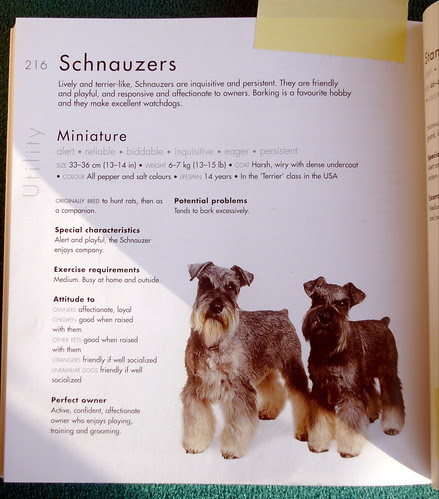 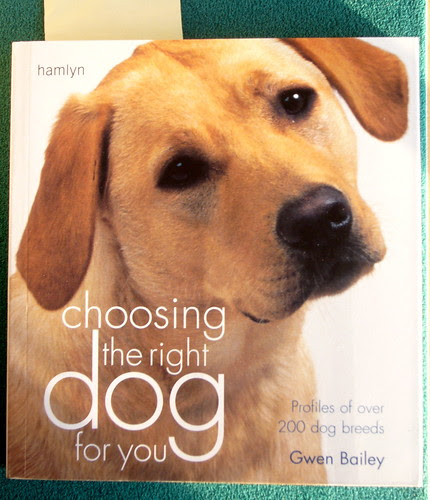 Choosing the Right Dog For You: Having made the decision to get a dog there was the question of what sort.

My initial thought was to get an adult mixed breed dog, until I met a Miniature Schnauzer.

The day I saw my first one I actually met three. The first was 9 months old, the second an adult and the last a puppy. Teasel came from the same breeder as that puppy so is probably a cousin.

I'd add to the description in the book: non-shedding, low drool, gets noticed. 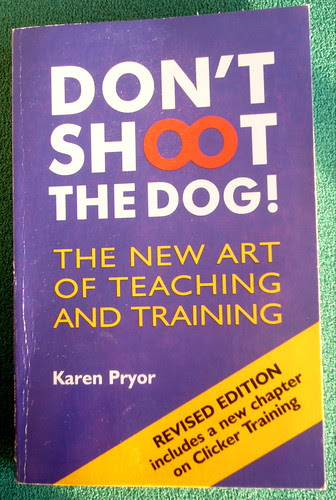 Don't Shoot the Dog: I'm rereading this at the moment. Having had a puppy for several months I've already fallen into some bad habits with respect to training her. This and other books mention the problems that can come when one says no without teaching the dog what it ought to do instead... The most obvious example I have is that Teasel has learnt that she is not to chew books if I am there... however when I'm not there she clearly considers them fair game. 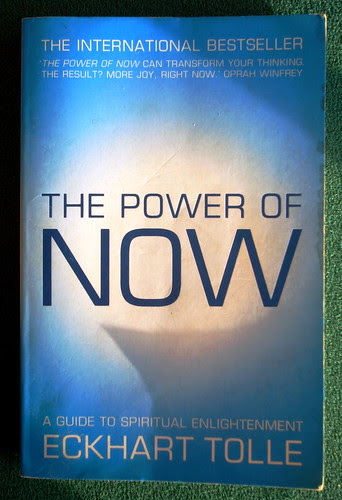 The Power of Now: Something that I've read/heard over and over is that dogs live in the now. This obviously doesn't mean that they can't learn or remember but that they don't dwell on the past or worry about the future the way we do.

I've yet to give up worrying or dwelling in the past but I'd like to!

This is a book that I started several months ago and am still reading. 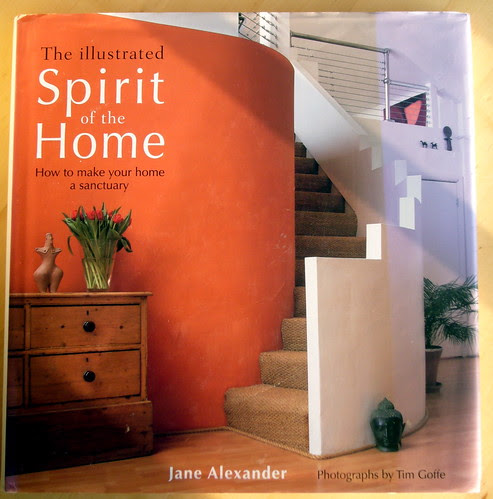 The Illustrated Spirit of the Home - How to make your home a sanctuary: And this too is a book I've been reading slowly and working through over the last several months. So far I've found it very encouraging.

Its is all about exploring what home means and making the place one lives into one's home.

I'll probably blog more about this one in 2009.

Something you may have noticed is that none of the books were fiction books. I simply didn't read any in 2008. So to set the balance right I'm starting off 2009 by reading a P. G. Wodehouse.

Fascinating to read, Caroline. Thanks for that. There are a few there I want to read now and I liked your segues. (BTW I had no idea about the Mum/Mummy thing. I was raised with that [my mother's background is English UM class though she was born/raised in Mexico] and it was a real effort when I forced myself to call her Mum since 'Mummy' is so not Canadian and reserved only for very little children. Then I did the same thing, unconsciously, with my own kids! I made them start calling us Mum and Dad this year. Tells you something about role modelling and conditioning that could well apply to dog training!)

Andrea - I never managed to call my mother Mum despite the fact that I knew no-one else who called their mother Mummy... even when talking about her... I can be so obstinate (or was it simply programmed?) despite the problems it caused me at school...

And yes I agree about the conditioning - both unintentional and intentional.

What a lot of fascinating books you've read this past year. After reading this latest book, I realized how starved I've felt for some good fiction - though I do love non-fiction as well. The 'Spirit of the Home' book looks especially interesting to me.

Hmm - I'm wondering how all that cultural programming translates from English to American...My mother always insisted we call her 'Mother' - which is what she called her own, despite the fact that my uncles - her brothers - called my grandmother 'Mom.' My own children call me 'Mom' - which seems just fine with me -- they reserve 'Mother' for times when they're either annoyed with me, or trying to get my attention (or both ;)

Tinker - It would be interesting to read something similar about American culture or probably cultures - surely too large a place to really be homogeneous. If you find such a book do let me know.