Secret #1 of 12: Acknowledging Your Creative Self 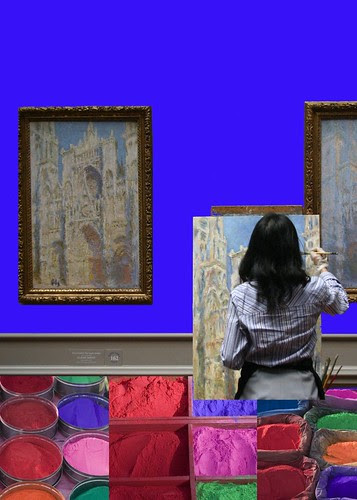 Artist SoulCollage® card - see card blog posting for attributions and description
I felt a sudden urge to join in with the 12 Secrets of Highly Creative Women group... organised by Jamie Ridler, Sacred Suzie's sister... so I haven't got the book yet. Lets hope it really is "in the post".

This first posting is about where I am in my creative journey.

I wish I knew!

I can tell some of where I've been, but where I'm going, I've yet to work out...

My mother was a trained artist though by the time she met my father she'd stopped earning her money that way... and by the time I knew her not making art often at all... so make that a blocked artist...

My sister is an architect - which means she did at least get to do an arts degree...

My sister-in-law is an art teacher and my mother-in law, Mary, a retired art teacher and active painter. Incidentally, when I showed some of my SoulCollage® cards to Mary, she noticed that in the Artist card (at the top of this posting) the woman shown just happened to be wearing the same blouse that Mary herself was wearing whilst looking at the card! I love synchronicities!

But me? Despite having always wanted to be an artist (or an astrophysicist) I did a Maths degree and worked for years in computing. Perhaps inevitably this led to illness, diagnosed as M.E. / Chronic Fatigue and leading eventually to an early retirement. 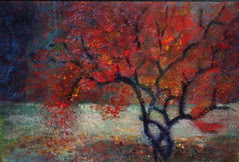 During the time I was working I exhibited art work a few times and got one piece into a juried show.

I also had a reputation for being creative. I was in research so you might think that was good... it wasn't... the people who got on were those who did "solid work" rather than people like me... which is odd because we were encouraged to play... I suspect it was partly the problem of working in an American company in the U.K. British values pervaded whilst the rhetoric was American.

In the early days of my access to the internet I played around writing stories and poetry and posting them on news groups... indeed searching to see if there was any trace left of my activity from that time I find this from 13 Dec 1989:

I doubt that I really meant damn rather than dam... more of a poetic slip...

Haiku! Haiku!
Is that a breeze through the trees
Or an unfortunate's sneeze?
Haiku! Haiku!

Since stopping work (and stopping playing on the news groups) I've taken quite a few courses in life drawing and painting, stained glass, enamelling and water colours. Maybe some others...

Actually I did recover from the first bout of M.E. and returned to work however I then did the Artist's Way for the first time (1996) just before going down with M.E. again, and from which I never returned to computing.

I'd felt that the AW had really opened up everything, and this new sense of spirit and art combined with having got together with Jim would somehow protect me from getting ill again. As it didn't, I not only got M.E. again, I also got depressed. That was a real problem as so many doctors find it difficult to distinguish M.E. from depression in the first place... however having had them both, separately and together I know the difference within me.

Besides, for me, M.E. has always started with a flu-like illness whilst depression tends to start with a big disappointment. The second time the M.E. kicked in and the depression came because I'd truly believed I was all set to be healthy!

This second bout of M.E. led me to explore more alternative health stuff and to qualifying as a Health Kinesiologist (see my Beyond Health Kinesiology blog). HK certainly has been a huge help (especially in curing so many of my allergies) but the problem I've found, from the artistic point of view, is that the sort of energy work I've needed to do has taken up lots of my time and all my intuitive channels.

However I think my last long bout of energy work really is over (at least for now) and I've started painting again. At the moment I'm keeping the paintings private as I'm preferring to let myself explore without being influenced by what others might (or might not) say about them.

However I take lots of photos - some of which might be considered creative at least...

So I'm ready to play - though I may prefer to keep some of the products of my play hidden! 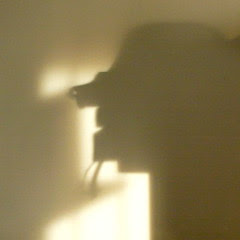 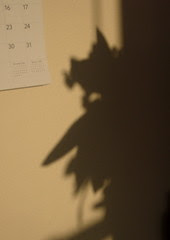 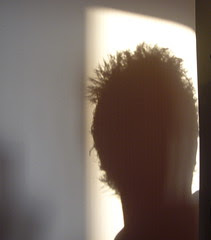 I find your perseverance and your ability to move through an illness that lands people in apathy and constant state of depression very inspirational and brave.

You are surrounded by a family of artists and that form of nourishment cannot be bought.

I love your Japanese Maple and I find your photography intriguing!

I am looking forward to sharing this journey with you, and may it bring you all the rejuvenation you seek. And much much health :)

I too am waiting for my book to arrive! Your thoughts and honesty about your creativity and your health inspired me greatly.

Looking forward to more of your thoughts as we go though this process.

Genie Sea - thank you for your encouragement - my mother-in-law is truly a great inspiration - still strong and creating at 71!

Jamie Lees - glad I'm not the only without the book yet! And thank you.

There was something familiar about that painting in the picture; there's a very similar one in Cardiff (just had to check to make sure my memory wasn't playing tricks)

Dru - its odd I've no idea what my younger self was thinking... I've no memory of writing these poems only of having been active on that group...

Monet was a bit of a one for making many copies... according to the flickr photographer whose image I used it was one in the West Wing of the National Gallery of Art, in Washington DC

Your photo's are gorgeous. I'm glad to see you joining in to acknowledge how creative you really are.

I really enjoyed this and your ability to integrate all these elements into a 'whole being' sort of post. You are on the right path, my friend!

It's interesting to me to note that most creative people I know have that as a sort of backdrop in their lives from the beginning. Some, not naturally creative, are almost expected to be so because of their parents/influences. My two brothers and I adopted a passion for drawing, all three of us, at an early age, that really flummoxed our parents, particularly our mother, who is creativity challenged (and I'm not just talking visual art). It's like we created the culture for ourselves out of a vacuum because we were surrounded by non-creative types and actual disdain for it. Weird, isn't it? (I detect a blog post coming on...)

Diana - thank you - I've only just noticed I was putting up shadows... hmm... obviously acknowledging the shadow side of creating is my current task!

Andrea - thank you - I know you've had to cope with my struggle about whether to call myself an artist or not... at least I'm happy to be creative!

And yes do that posting!

caro, a wonderful post, thanks for sharing it. I'm not sure that I agree that creativity is more valued in the US though.... it seems to me that it is spoken about, but the actual expression is an issue. Solid work rules, no matter how boring. Masks. Or shadows, to fit your theme.

Hayden - I worked for Hewlett Packard in their research labs - when I started it was under the wings of an American who was extremely encouraging of creativity and "renaissance people" - fitted me to a tee - later he left and we were left in the hands of an ex-civil servant - big mistake in my view. So I've no idea about American culture in general but certainly in this instance the damper was definitely British!

You are probably going to appreciate and enjoy the first chapter as much as I did when you finally get the book. As someone who is currently fighting off yet another cycle of depression, your words help me to continue on. We are all artists in our own way. In all things. What thing do we do in life isn't creative if we want it to be? That said, when I worked research I thought I was going to die of boredom. Not my thing at all!

Wouldn't that be amazing if one of us actually had been Jane Austen in a past life?!

I love the way you have to always question yourself! :) And I find you very brave to write it in your blog! :)

Oh my am I happy I found your blog (from Genie Sea). I had to see what another Caroline was up to in this world.

This is a wonderful post! Your painting of the tree is breathtaking. Enjoy your creative journey, I look forward to reading more of your blog.

Sacred Suzie - I hope so - though I've just had an email from the supplier to say actually they don't have a copy - so I've now reordered it from a US firm which means it may take ages to get here! What sort of research were you doing? I was in Artificial Intelligence and we were coming up with new stuff all the time - it was lots of fun!

MP - it always worries me when someone says I've been brave! :-)

Caroline - great to meet another Caroline - one of my problems is that when I've reached a peak I lose interest and want to do something completely different - I considered that tree a peak and consequently haven't painted in that style since...

Wonderful photos, Caro - I love the shadow faces you've found. Your art, photos, wordplay - have always seemed so creative to me. I've seen several other people doing this group online recently - it sounds like an interesting project - looking forward to seeing where it takes you!

Tinker - thank you - I'm going to have be creative about this group since I probably won't have the book for several weeks... an interesting challenge!

Those photographs are fascinating. I imagine a shadow puppet show with quite an amazing (and kind of scary) show going on!

Thank you for sharing your story, and it's ebbs and flows.