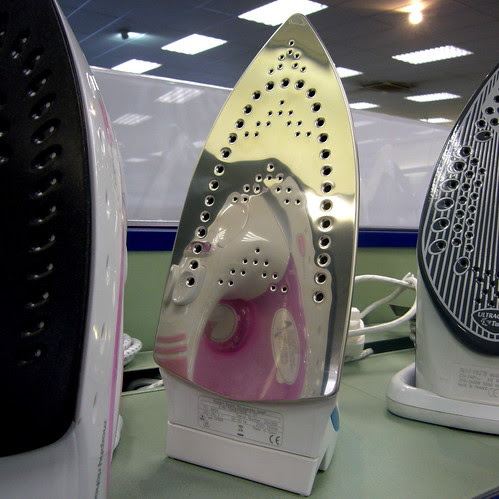 Yesterday we went shopping, but nothing did we buy
But a Trade-It paper and some petrol for the car
We wanted a curtain rail, preferably like one we already have that works and not like the other one which having sagged and bagged and lost its will to live is why we need a new one. It turns out that the place we originally bought the good one has decided to just sell its own label version now... and its expecting around twice the price we thought we might have to pay! It also really wasn't what we wanted.

Something else we need, though to say I want it might be a little strong ;-), is a new iron. The old one no longer gets warm and therefore absolutely and resolutely refuses to create steam. I was simply dazed and dazzled by all the features that were available. I've no idea which I might actually find useful... doing a little on-line research this one is looking good: Philips GC4340 Azur Premium Steam Iron with Auto Shut Off 2400W

. I may just order it today. 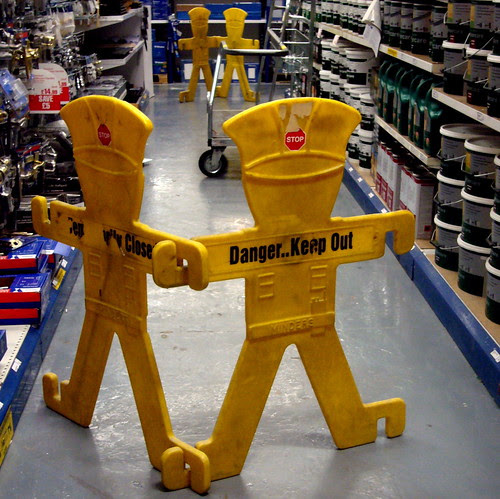 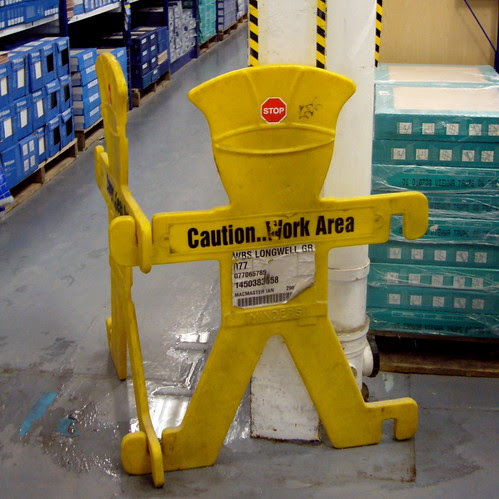 One of the shops we tried for curtain rails didn't sell them at all but they had these brilliant yellow guards to keep the public away from various disaster areas in the store. I love them!

They remind me of a toy I had. It consisted of interlocking plastic clowns in pretty colour. They could be slotted together to stand on each other's shoulders. But I found it hard to say shoulders. So my toy became known as my soldiers. 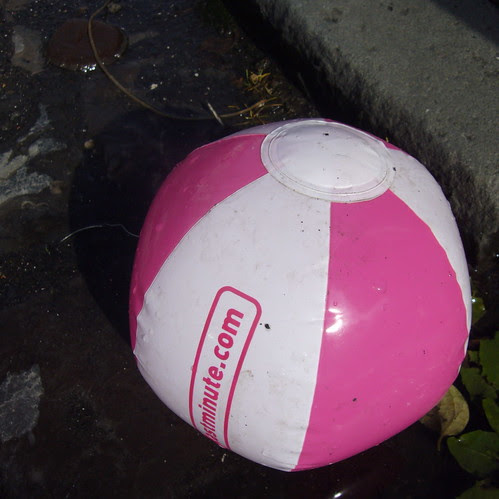 On my way to an appointment for a massage I took this photo. Jim, who was going as far as the shops with me, said it would be ironic if stopping to take a photo of a beach ball prompoting lastminute.com should make me late!

As it was for the first time ever I got there before the masseuse and had time to talk to another of the therapists who works there and whose next client was also running late... the rain, the traffic and schools being back all made driving in Bristol most unpleasant yesterday.

This morning I found this outside: 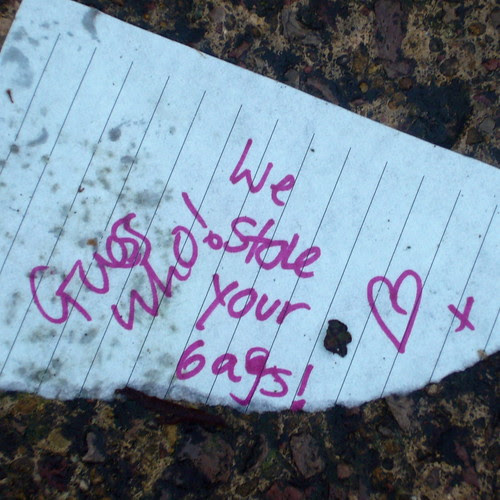 I hope they were not your bags they stole!.

I used to like the minimalism and smell of using a non-steam iron and a damp tea towel. These days I have even been known to buy vanilla-scented water to put in the iron's reservoir. Shameful, shameful.

Those yellow guards remind me of ....security guards I have known.
Peaked caps seem to have a damaging effect on people's brains so that they start using phrases like "you can't do that" and "that is more than my job is worth" (no, really) and even "negative on that" instead of "no".

Phew, glad I got that off my chest.

love the pink image in the iron, the yellow guys, and the pink throughout your post. very artistically done, as if you planned it. mind you pink is your favourite. as you showed it in your 'walk' post yesterday too. isn't this weather just too diabolical for words???

Judging from the floods that've hit Britain, I have a feeling that more of those yellow soldiers will be needed. Maybe a bit taller, though.

What happy little yellow signs!
We could use some of your rain and cooler weather, here. It's still in the nineties and above!

Dru - vanilla scented sounds wonderful... would adding a stop of vanilla essence work do you think?

There used to be some lovely security guards at the first place I worked - when I was off with 'flu for two weeks they actually noticed and when I came back said they'd missed me and my smile! So I suspect our experiences with them have been somewhat different...

SB - pink was the world's favourite on those days... I like all colours! Actually its good fun to go out hunting for things with a specific colour. Maybe I'll do that today.

Tink - its raining again today and I've already started wearing thick socks again - you'd be welcome to a weather swap - just so long as we get to keep some water and you get to keep some heat!