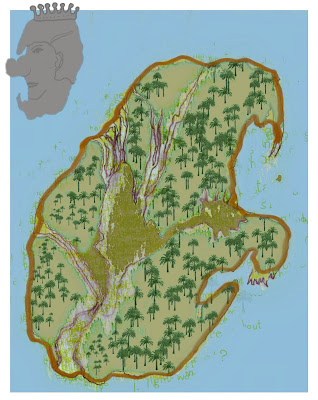 Island by Caroline in Corel Painter
This illustration started off as a smudgy pen and ink treasure island on paper that I was doing for Illustration Friday in June when the prompt was hoard. I was planning to do a map to buried treasure. Somehow I didn't get it finished. This was a version that I scanned in and that later became a pretend postage stamp which is why there is a version of the island as a sort of Queen's Head on it.


Habitweb - the No Diet Diet is all about becoming more aware of ones habits and breaking free of them.

Today a dreadful one took hold of me!

I had decided to break a habit I have of getting a hot drink (usually just hot water) and then sitting with it at the computer. One reason for wanting to break this one is that I've broken several keyboards that have not coped with even minor spillages of water on them...

So today several times I was very aware and sat downstairs whilst drinking my hot water. I put a cold water by the computer with the idea that it would help me if I knew there was something there to drink.

And then around lunchtime just when I was planning on going out, I was sitting at the computer and knocked the cold water everywhere, including over the keyboard - and what did I knock it with?

The mug of hot water that I hadn't noticed myself bringing in!

Not only water everywhere and the worry that my keyboard might no longer work but realising just how much I had failed in basic awareness!

Luckily the keyboard does seem to still be working - though if I go off line for several days it may be because its stopped!

However my determination to break this habit is now very much stronger.
No water or other drinks are to be allowed in here at all!
And that's final!

Nothing like a little aversion therapy is there? How's the keyboard now?

I love maps and I love the whole desert island theme so I enjoyed this one. (And that profile has some ugly nose :)

Been thinking about your game posted below but I'm so lazy about these things that I ended up passing. Could that be my worst habit? Lazy-arse-edness?

Great pic, of course, but I was wondering, what happens if you accidentally break a good habit? DO you get your money back?

wow, now you've got me thinking.....my worst habit is eating too fast, in a precocuppied way with so much on my mind, and then getting stomach ache afterwards! good question.

really like the rough look of your island...and the face shape of it too...
btw how is the keyboard now? has it gone to join the other keyboards in keyboard heaven or is it fixable?

Too many habits still to choose from :-) Procrastination may be the worst of the lot...
I've been trying to remember, if I have it with me, to set my tea or water down beside the computer table, rather than on it, especially since there's a very inquisitive kitten, my 'computer monitor' - of course, that doesn't stop her from attempting to explore it down there - but at least if anything gets spilled, it's only on the floor. K has been saying for years, that with all the drinks we spill around here, we ought to just put a drain in the floor ;-)