I was hoping I'd get the timing right so I could use this one to announce the winner of the giveaway!

All the people who commented on the giveaway are listed below in the order in which they commented, this is so I can then choose which of you is the winner using a random number generator - there will only be ONE winner of the journal, etc:
Thank you all for commenting and celebrating my 3rd blogiversary with me.

As I mentioned above I have decided to use one of the random number generators to pick the winner, so without more ado here we go. This is grabbed from the screen given by random.org's sequence generator: 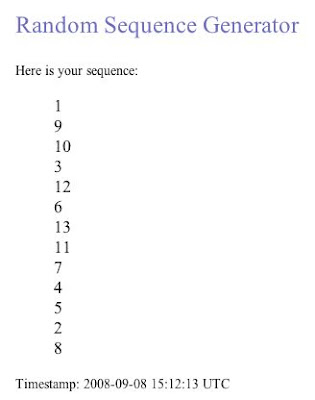 This shows you exactly how close each of you was to winning. But top of the list at number one is #1 and wow - its Connie with whom I'm due to meet up for the first time ever this week - what amazing luck! Since that's going to save me the postage I'd assumed I'd be paying, I'll also send something to the second on the random list... and that is #9 - Joy Eliz!

Congratulations to both of you and I hope you enjoy your prizes (though, as yet, I've no idea what I'm going to give Joy Eliz!).

Whilst I was typing the above the doorbell went - it was the window cleaner who is a fascinating person to talk to. Today he let me take his photo: 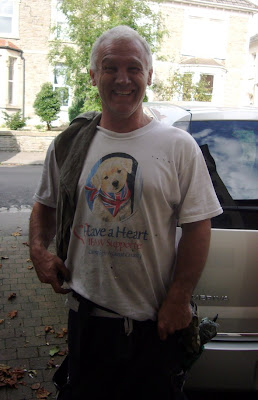 Notice that his T-shirt has a puppy on it.

In one of my recent posts I mentioned that I was wondering about getting a pet. One of the things that I have realised is that I really want a dog. Whenever I talk about moving into the country one of the main reasons I give is its so that I can have a dog.

I grew up in the country and we had all sorts of animals including several dogs. When my father died and we had to sell up and move into town, the dog and cats came with us, whilst our hens, and other more country oriented animals, went to new homes. Unfortunately our dog did not like the transition from a life of great freedom in the country to one of great confinement in the town.
Bearded Collies are sheepdogs first and foremost and Torrie had been used to having at least some of us around all the time, not least, my father who was always there. Town life tended to mean we weren't in so much, and of course, Daddy wasn't ever there any more.

As a pack we'd disintegrated, lost our territory and failed to elect a new leader! She was doing her best to keep us together and keep an eye on us...

I've been reading The Dog Listener

by Jan Fennell and Dog Watching

by Desmond Morris which is why I am thinking about dogs in terms of their position in the pack. I think I'll order The Practical Dog Listener: The 30-day Path to a Lifelong Understanding of Your Dog

also by Jan Fennell - as I was so impressed by her first book and am now determined that when I do get a dog I'm going to make sure it knows that Jim and I are the top dogs and it doesn't have the stress of attempting to fill that role with us so all of us can relax and be happy!

Yesterday we went to visit a possible dog to buy - it was, unfortunately, extremely badly behaved and clearly saw herself, at 13 months old, as very much the top dog. She was advertised as a Miniature Schnauzer with a bit of West Highland Terrier in her, though apparently a vet had identified her as mostly something else, I can't remember what. She looked more like a Westie to me (probably because she was mostly white) though with a very strange coat and somewhat larger. They were selling her because she "couldn't be left on her own". She jumped up on their settee and barked out of the window whenever anyone went past. We decided that she was too much of a challenge for us - we did not fancy being woken up all night long with her barks as people went by - and besides we really didn't warm to her - if we had, it would have been different!

Her owners had bought her as a Miniature Schnauzer, though without any papers. They also had another one that really did look like one - he was a completely different kettle of fish - or rather dog - and altogether calmer, softer, nicer. He was a few months younger than her and clearly was happy to let her be top dog whilst he had a quieter time of it.

We then went to visit one of my friends who has recently moved. We all went for a walk around her new village, which is only a mile or so from her previous one. Whilst we were out we met some people with a lovely dog. I asked them what it was. As I'd suspected it was a male adult Miniature Schnauzer! I asked them if they knew where I could get one too (after they'd told me what a sweetie he was of course).

They mentioned that there was someone near the Old Neighbourhood pub who had recently had one as a puppy. It turned out that the people with the puppy were living in the house next door to the one my friend had only just moved from! So it was easy to find and we went there on our way home - they most kindly gave us all the details of the breeder from whom they'd got their puppy and let us play with him for a while too.

I don't know if we will end up with a Miniature Schnauzer or not... but I certainly liked all of the actual ones that I met yesterday!

Something else that has challenged my ideas about what one can do in the town was seeing a chicken in someone's garden on one of my morning walks. However these wonderful pigs might be a little more than our neighbours could cope with:

I had to get right inside the hedge to get that photo whilst we were out walking yesterday - what a lovely day out we had!

I'm so excited at the idea of getting a dog that I'm going to have to calm down before I do.

yes! i made it on the list!!! thanks! yeah.. you're onto me! didn't list you so I coul win. guess it worked! my main blog is actually a "mom blog" http://nowenteringmomville.bloggspot.com check it out!! and thanks again!

quitecontrary1977 - sorry I don't think you read this correctly. Everyone who commented was on the list of comments. You were commenter number 2 out of 13 which means you came in 2nd from last on the random number generator. Truly sorry to disappoint you.

I have slightly re-worded the intro to the list of all the commenters to make it clearer. I hope no-one else makes the same mistake.

400th post well done! Fab Caroline, I'm almost upto 200, but don't think it's going to quite synchronise with my blogiversary, I love the red collage at the top, makes me want to go and dye some deep reds!

2 random words for today : likes justification! (does that constitute a statement?)

Congrats to Connie and Joy Eliz, and congratulations to you on three years and 400 posts, Caroline! I'm sorry I didn't think to advertise your giveaway - it's been quite a week. But then perhaps not doing so, improved the chances for Connie and Joy Eliz, and it seems like the drawing turned out rather fortuitously in the end.
Wishing you the best of luck in finding your future canine family member! xo

Jo - thank you - red wool like that would be wonderful - would make very cosy gloves and hat... mmm.... I should also have mentioned that you share my interest in randomness shouldn't I?

(Justification crept into my answer to Tinker... :-)

Tinker - if I had been guessing who would win I'd have plumped for you because your record in the past on winning giveaways is so impressive! I'm ridiculously overexcited about getting a dog and I'm not sure Jim is 100% persuaded yet... I'm hoping that since its my 50th birthday coming up that will be justification enough.

Love the 'Red' image! A very dog-themed post this one, perhaps it will inspire me to post more dog updates, they've been rather thin lately. Dog ownership not to be undertaken lightly, it's great to hear you're giving it lots of consideration. You're welcome to come help me walk mine some time, if you just fancy 'borrowing' one for a bit :-)

Hi Colin - We have been wondering if you and Jack would like to come for a walk with us sometime... so yes please!

400 posts, that's amazing, must count mine someday (have had 3 blogs). congrats to the winners. i can't wait to see what kinda dog you do get....oooohhh exciting! calm down, calm down!

From the Lucky Winner! Many thanks Caroline (or many thanks, Random Generator). I really wanted that prize! Yes, we meet tomorrow and you will save postage, but from what I've just been reading, our get-together is likely to cost you now and in the future, since once you meet our little dog Bella, you will rush out and get the next dog you see - or several. See you tomorrow!

SB - I've not been counting posts on other blogs - just this one! I got a lovely book today about dogs so I could think about different breeds!

Connie - glad you are looking forward to it!- see you tomorrow - and as to rushing to get a dog - I've been so tempted already... I kept a lid on this wish for so long that now I'm giving myself permission to grant it I'm more than a little over excited.

I can't believe I won - How fantastic! Thanks Caro. I knew there was a reason I was drawn to my blog this week:)

Well my current routine is weekday afternoons, except Wednesdays for an hour or so around Eastville park. If you wanted to pop over one day, we'd be glad of the assistance. Wouldn't require much arranging. Or I'm sure we could figure something else out, drop me a line.