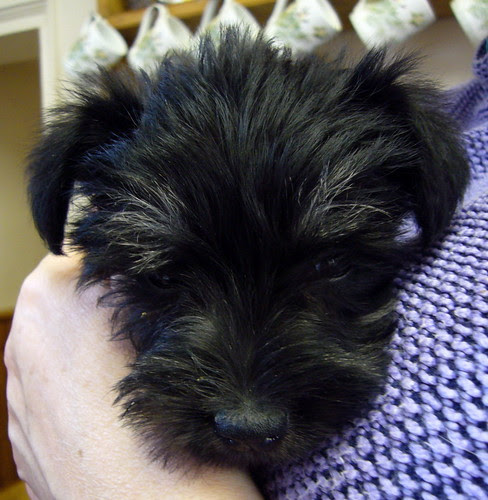 Yesterday we went to see some Miniature Schnauzer puppies - this little black and silver bitch is the one I've chosen - we'll be going to collect her at the end of the month.

It was wonderful to see them all and very hard to choose between them. If I could I'd have chosen several as the hardest bit is the idea of separating them from each other. At least we'll be giving ours a home with nearly full-time human companionship - I just feel its not quite the same as have a sister or brother to play with!

I may be off-line rather a lot in the next couple of weeks - partly because I'm having a lot of problems with my connection to the internet - it just keeps on dropping which is frustrating - and partly because we've got to get the house and garden puppy-ready - as we've had no children or pets living with us here before I think there might be quite a lot to do - especially in attempting to make the garden escape-proof!

This puppie has beautiful eyes !

Exciting times ahead, no doubt! I think my number one tip would be to get a crate or a cage. Not only are they excellent for house training, and allow for safe confinement, but dogs appreciate having a den of their own - which can be made nice and homely with blankets and bedding. We put J. in a super large one, which we gradually unpartitioned to give him more space, until he was out of it completely after three months or so.

I think my number two tip would be to get them used to separation early. Practice leaving them alone for a minute or two as often as possible, as early as possible, and gradually extend it up. That way you end up with a dog that's comfortable being left to it's own devices for the occasional spell.

I'm no expert of course, just some observations that have worked well for me. You'll probably end up overwhelmed with conflicting advice. Ultimately it's mostly down to following your own common sense.

I think the most useful thing I ever learned about puppies came from a vet ;
"Everything new they encounter in the first six months or so, they treat as a poential game. After that age, they treat it as a potential threat."

It's going to be lots of work, but well worth it. I've been feeling a bit broody around puppies lately myself...

Happy Puppy Day! Oh, what a sweetie. I *heart* him too. I wish I could pass on some advice but I am still waiting for my dog to find me. One day she will. Enjoy the time with her when she comes home with you!

I've been catching up on your posts, I really enjoyed the tag!

I wish I knew what to tell you about dog-rearing. Although we had so many growing up, we didn't do anything special...they all just loafed about while we went to school and ran wild with us when we played. Occasionally, we took them to the vet.

How adorable! The book, Puppy Preschool (seriously) was wonderfully useful for me, a very natural, gentle and incredibly effective approach to training your dog. Oh, and hide all footware.

cms - Jim has been trying to work out whether a cage or a crate is what is needed and if so which...

Getting it used to separation early does sound sensible. She's such a cute puppy that my biggest problem is my own separation from her!

sacred suzie - I do hope you don't have to wait as long as I have - she is going to be my 50th birthday present! (though arriving a couple of weeks early).

GG - that's pretty much how I remember dogs from my childhood - we had one that would these days almost definitely rounded up as a stray because she used to like long walks on her own... we used to hear about her from other people and she'd come home for dinner.

ellen - thanks - I'll look up that one! I must remember about the shoes... I noticed yesterday how much interest they had in feet and shoes...

Oh, she's a beauty, Caroline. Have a wonderful time with her! Trixie never chewed shoes, but beware the books on your bottom shelves if they're at floor-level!

She has a gorgeous face! All I can say is be prepared for a few weeks of alertness re. toilet training. After having a pup here for four days it made me realize how incredibly bright our old Zoe was when we got her at the same age as Tazo is. She was housetrained in 24 hours. Tazo is much more normal I'm afraid...

Aww! That is one beautiful puppy! I am open to getting a puppy for the children. We have been borrowing my friend's dog and they love her. My husband's family had a line of miniature Schnauser so I am thinking that maybe we may get the same breed. Have fun hugging!

GreenishLady - thanks for the warning about the books - not only do I have books in the bottom selves I have them all over the place... I'll have to confine them to a room that the puppy won't be allowed in and hope I can maintain that discipline.

Andrea - we are prepared mentally though not yet physically... I know some pups learn much faster than others...

Ces - if you go anywhere near some puppies that "open to getting" will turn into "just got"!

OHMIGOD, she's adorable, what a little sweetheart? what you gonna call her? your whole life will change and she is going to creep right into your hearts (if she hasn't already!) congrats mum and dad!

Oh! Oh!
She's lovely, Caroline!
What a sweet face, she has - I love her silvery eyebrows, especially
Have you thought of any names yet?

It's been quite awhile since we had a puppy - but what came to mind first, was electrical cords - if there's some way of raising them up/blocking access to them - perhaps it came to mind, because I once knew a black poodle with silvery eyebrows that ended up eating baby food after chewing on a lightcord.
But you'll be home with her so much, there probably won't be much opportunity for those kind of things, either. What fun all of you will have!

SB - thank you - we are already besotted - especially Jim! We are thinking about calling her Teasel.

Tinker - we did consider calling her Tinker... but I thought that might be confusing ;-)

I've no idea how we are going to keep her away from electrical cords except by keeping a close eye on her...

love the name, just perfect, yup i'm in love for sure...can't wait till you ger her and we see lotsa pics..you are not going to be sorry, this is one of the best decisions you have ever made! yahoooo.

how are the preparations coming on? have you decided on a name yet? it's soooo exciting!

SB - sorry not to have answered you sooner - we've had a long weekend away - our last before we have to consider what to do with the puppy / dog!

The breeder rang last night, just after we'd got back, and said Teasel is ready to be collected already - which is a few days sooner than we'd been expecting so today we went to collect some things and tomorrow we may well be off to get her!

Oh yes, what a cute little sweetheart, I envy you, a puppy is soooo sweet and so much fun!