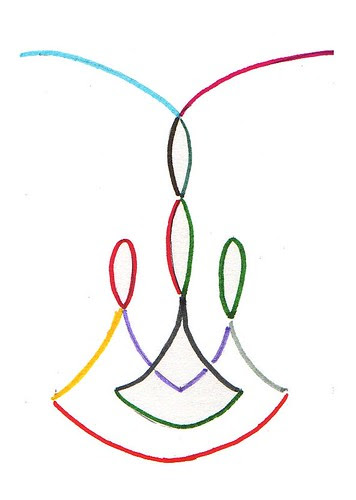 Less is more :-)
Simple and effective.

This has a nice balance, almost minimalist knot-work I suppose. You were quick with this! Jack Xuaxat says thanks for hopping on board by the way.

Paula - thank you - I do have difficulty with stopping at times - but this wasn't one of them!

tee hee - I was wondering about applying the tattoo somewhere... I've got some tattoo transfer paper that can go through the printer...

Caroline, I see these are Caros lines! perfect for the theme!

valgalart - I like that, thank you! Why didn't I think of it?

This would look wonderful between the shoulder blades...simple, but with color and a sense of movement on the curved base.

Great job, this is wonderful! I love the ryhthm it seems to have.
a.

Carla - thanks - that sounds like a great place to put it - what colour dress do you think would go with it?

Txartcgal - Funny you should say that - I've just seen "Blow Dry" and apart from an incredible tatto on Rachel Griffiths head it also featured a tatto on Alan Rickman's foot!

Andrea - thank you - if it has rhythm perhaps a foot would be the best place to put it...

I love the lines and design of this. Great job!

Reminds me of my daughter's tattoo of the "Orin" on the small of her back (it's from the Neverending Story). Of course it looks nothing like it...just reminds me of it. I rather like this for the small of a back. Great illo!

Cool. What part of the body is this on?
love

Excellent. Love the lines and especially the color. Would it make a lovel tatoo, better then a skull and bones. But you have to say what part of the body you intend this for

Oh lovely lines!! i would like to see you have this on the small of your back. What you think? Wouldn't it be great.

this is a charming pattern to be tattoed on somebody's chest...
:)

This is a great tattoo, I can also see it could be a necklace.

Caro: Nice! Where would you put it? This would be a great back piece because of its length.

Wanna design one for me? My friend designed my first and is now designing my second. I like the idea of wearing a friend's art; it adds meaning. My brother, who is an amazing artist, said he would design one for me, but that was four years ago and I've let it go. Too bad for him.

Because you tattoo looks a bit like a stylised African sketch of three women, I was reminded of Zulu love letters. Do you know what they are?

Here is the extract on them, correctly called 'Ibheqe', taken from this site:

This is a narrow beaded band with a rectangular flap that rests in the hollow of the throat when worn around the neck. The flap incorporates a geometric design composed of triangles in various combinations relating to male/female relationships. The white band holding the flap in place might contain a message in coloured segments composed perhaps as follows:

Black { next to the white of the band, signifying marraige}
Red { next to the black signifying a aching heart }
Yellow { Following the negative black red combination, selects " withering away, pining for " }
Blue { The pivoting colour, followed in opposite sequence by colours preceding it, yellow, red, black} demands response.

The girls is saying : "We are married, but my heart is aching because our love seems to be withering away. When will you return?". Typically, a rural girl will send this to a young man working in the city if she has not heard from him for some time.

nice and simple. this would be a great tattoo for the upper arm (that is, if i wasn't such a chicken and would actually even get a tattoo). ;-)

It looks like a logo...with some combination of those olympic looking logo...hmmm...

Unknown - which part do you want me to draw it on?

Janey - I intend to draw it on anyone that stays still long enough for me to play with my felt tip pens near them... so the part of the body will be whatever is available at the time ;-)

Toni Kelly - I wouldn't be able to see it myself if it was there - I'd spend hours trying to check it was still ok!

Ayanaku - Well if a chest comes by I'll draw it there...

Katili - a necklace? Now that is an idea - I could make it out of coloured wires....

Wandering Coyote - I don't think I will be designing you one - I'm not very keen on indelibly marking the skin... you never know when you might change your mind!

Reluctant Nomad - thank you for this - I'd not heard of Ibheqe before and they sound fascinating. I've been wondering about ways of communicating that don't involve words and this is one! thanks!

cosmos & coffee81 - I hadn't thought of it as an Olympics logo but I can see what you mean! thank you!

No sweat at all :D

This is cool. I really like the Mandala and Unpeeling Emotions.

Simply beautiful! I am remiss for not stopping by!

Thanks Jody - don't worry - I know its hard to keep up with everyone all the time ;-)