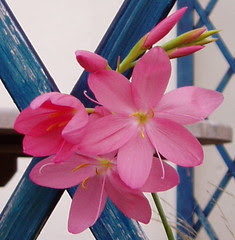 This is a plant that seeded itself. First bloom opened today 31 Oct 2005.

If its a lily its parent was a Stargazer Lily that came "free" from Thompson & Morgan, in other words I'd spent so much that I'd earnt it. Last year it came up and was just leaves. And I thought the same had happened again for this year until now, rather late in the season, this beautiful bloom has opened.

And this one really is free.

If its not a lily I'm not sure what it is.

A bit pink for Halloween...

Haha, I like Free Lily! What a free, joyful flower!