In my last posting I showed the above white feather and pink feather and asked what you thought they might mean if interpreted as a sign - thank you for all your suggestions - its great to have different ideas. I loved them all whether they'd been given somewhat tongue in cheek or seriously.

I put a comment on that posting to a flickr photo of what I'd bought whilst at the shops just after taking the pink feather photo. The first of the books that I've looked at (and already read most of) was this one - The Secret by Rhonda Byrne: 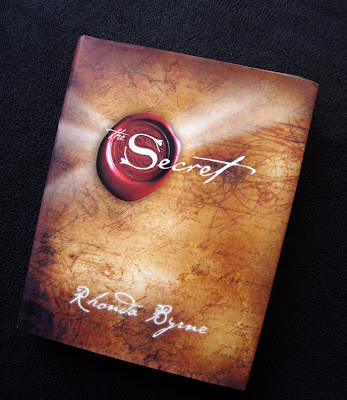 I bought it from a charity shop and its in nearly new condition - indeed if a volunteer hadn't used an overly hard pencil to write its price in I could get away with saying it was new - and I might have been tempted to give it away as a present to someone else...

Instead I've read it. In the foreword I found this: 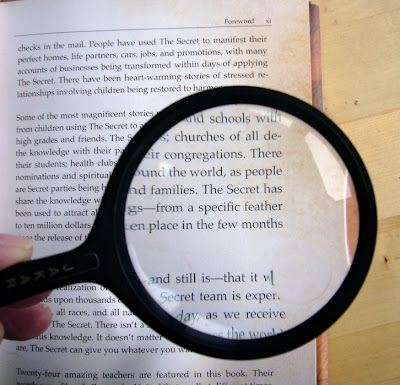 Note the "specific feather". And later on in the book the story of such a specifically imagined feather coming when asked for is given (pp 64-65): 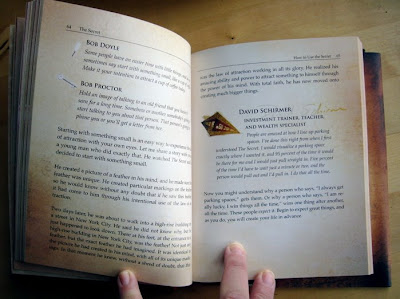 I've been vaguely aware of The Secret as a phenomenon and must admit was rather annoyed at all the fuss! And having read it I'm still annoyed at all the fuss but I will admit that the ideas are very well described - however they are hardly a secret from anyone who has read a self-help or spiritual book in the last 30 years! And if the fuss has helped more people play with the ideas then maybe I'll stop being upset by it...

It is all about intention and setting one's intention appropriately. Lots of different people have ideas about how to do this effectively and in The Secret Rhonda Byrne has set out some good guidelines.

When talking to both Jim and my sister about it they mentioned this book from 1977, Illusions by Richard Bach: 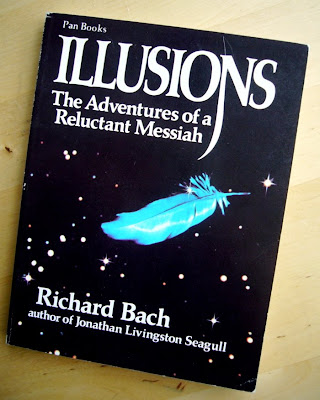 Email ThisBlogThis!Share to TwitterShare to FacebookShare to Pinterest
Labels: feathers, Illusions, The Secret

don't get it...feathers? so?
stick to that cutey pie teasel, he's like a whole pile of soft warm doggy feathers wrapped up in one...adore him, he's just so scrumptious.

And Teasel? She is a lovely thing isn't she - she's just been entertaining one of my friends and my friend's two children - two and half and four year old boys - Teasel behaved really well - obviously adoring the smallest one and constantly asking him to play with her!

Of course, I love synchronicities too. (but not the Secret! no Caroline, it's such drivel! Stop reading!)

Your photo of the white feather is stunning. I'm also commenting to tell you that you won my art give-away! so head on over to my blog for more info. I'll need your address to send it off to the UK. Congrats!

I agree with some of the Secret but not all of it... it is possible to attract things into one's life but I've also found other models useful too. As a once-upon-a-time mathematician I treat everything as a model and attempt not to invest belief in anything... :-)

Hello Caroline !
Your feathers are pretty, but I have not understand all Your text..
Sorry...
I'll come back the read it again...
See You later.

There are Fevvers Wiv Powers in Gerry Anderson's first Supermarionation, Four Feather Falls, which, though I remember from the first time round, turns out to be not quite how I remembered it.... a sort of prototype for Carlos Castaneda, perhaps.... :-)

Webradio - sorry my text is hard to understand.

Dru - I'm not familiar with that one... is that a sort of Thunder Bird feather?

Yes, I think you're right - the Secret does pander and oversimplify ideas that have been around quite a bit - even pre-dating Louise Hay, Richard Bach and others from the 60's and 70's - but I agree with you, Caroline, that more importantly, if it gets more people thinking about what they might be attracting into their lives, then it's definitely a good thing.
And you know how I love a good synchronicity too - feathers! Have you run across his Jonathon Livingston Seagull recently too?
;-)
Oh - I almost forgot - I found four tiny mockingbird pinfeathers on the driveway while sweeping yesterday - not as colorful as yours, bnt still a nice find!

Thanks for popping over Caroline, really I should have come here and told you all about your award!

Ah! The Secret.... Read it too... What is annoying me in this book is all the fuss about getting more and more money for oneself.... Maybe trying to have more and more Peace into this World would be better... but I'm just an old hippy... ;o)