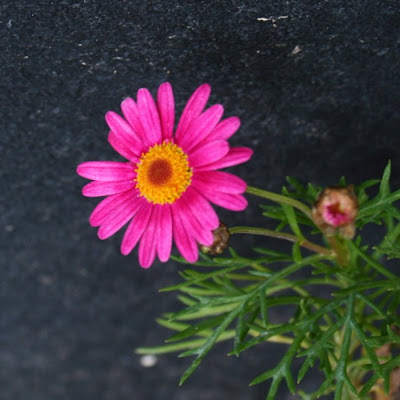 Man is least himself when he talks in his own person.
Give him a mask, and he will tell you the truth.
Oscar Wilde (1854 - 1900)
One of the things about blogging is that when you read someone else's blog you have no idea how much of what they present as themselves is real... there are people who enjoy pretending to be different in all sorts of ways... and suddenly reading Oscar Wilde's quote I realise that my problem is that I've been attempting not to pretend. Does that make sense?

Dru commented on my Real Illusiions post --- "dodgy things, facts. I prefer truth, so usually only read fiction." which is another way of putting this.

In a past relationship I found the only way to get real emotions out into the open was if we both used glove puppets to speak through.

And so in the light of this here are the values I've finally come up with, though through a different process from the one Carla suggested:

Synchronicity - I just love synchronicities and though I don't necessarily ascribe "meaning" to them, some do feel quite meaningful... on Tuesday I was in a charity shop and wondered about buying this scarab paperweight. I didn't. I went in again yesterday and was glad to see it was still there what's more it was half price so I bought it: 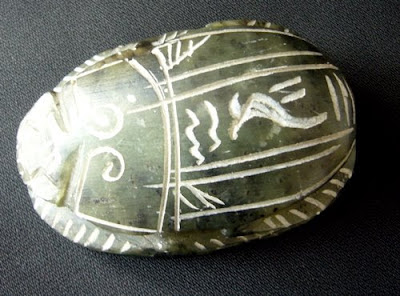 This may not be a "golden scarab" but as a scarab its a good representation of synchronicity.

Today I saw this fridge magnet and I'd bought it as it's message is to "follow your bliss". Maybe a value in itself as well as the message that came through loud and clearly, via synchronicity, the day I first visited Carla's wings4you blog. (And doesn't it fit this metal pencil tin well!)

Other values that come up for me:

Self-governing - as in the freedom to make my own choices, assuming freewill does exist, if it doesn't then this is moot. However the make-believe I had to play to do this exercise required me to use the model of freewill existing, otherwise there was no point to values (see Monday's post for where that tangled line took me!)

Non-belief - to be as free from beliefs as I can be. One of the difficulties of language is that describing an experience is almost impossible to do without using words that I and other people put down to beliefs. In general I attempt to work with different models and chuck them out when they aren't working for me. Provided I notice... and am not over-invested in them... so yes I value non-belief, I just don't always manage it.

Seeing one's self in the reflections of others - and the complimentary aspect of that is realising that other people are mostly seeing their own stuff when they react to me! I mean here the tendency one might have to like or dislike certain people, or things about them, when really its one's own's stuff being projected outwards.

Oneness - I was reading yesterday one of those things about how every breath you take is likely to have molecules in it that have been breathed by most of the famous, infamous, people in the past, as well as all the rest of course... that's one physical example, another is the sheer interdependence we all have on one another and the ecosystem that supports us. On a more spiritual level there is also the, occasional, experience of really being one with everything and everyone. I first had this when I was 8, but unlike many more mystical people it hasn't kept me all good and saintly... its very easy to let myself be pushed back into the shell that is me and to forget this.

Facts and Fiction - well that's how I've got to here so I suppose it must count as a working value for me today!

Email ThisBlogThis!Share to TwitterShare to FacebookShare to Pinterest
Labels: values

There is so much in this post I don't know what to comment, but your choice of core values is good!

i kind of agree with anonymous! lots to ponder!

i was thinking about red riding hood today and wondering if it was floating around in my brain and started coming out in my drawings because of what you'd written about the story. the brain is funny like that, stirring up things you take in and spitting them out in other places without always making the connection of where it began.

my husband asked me about whether i was ever worried that the people whose blogs i read weren't really representing themselves authentically. i don't worry about that so much. i guess i feel like if i've read someone's blog long enough i have a sense of who they are even if they don't share everything.

Wonderful finds you've made, Caroline.
Your list of core
values sound very reasonable - though I am one who tends to believe in belief - but only within reason, lol. Perhaps your value of striving for non-belief is one I should give more thought to...
I think (or is this a belief?) that in general, people tend to react to things in other people, that reflect 'their own stuff.' Whether or not they're perceiving 'the right stuff,' is another matter though.

Leah - a long time ago, before the web but when the internet was in place, I had an exhibition on and invited a fairly local woman I'd been communicating with via news groups and email. The woman then admitted to being a man and was too embarrassed to turn up - I was disappointed - I didn't mind at all that she was a he...

Tinker - belief is a biggie isn't it... I'm happy to keep some form of self-confidence / self-belief but I'm not keen to keep anything in the form of "received" dogma... I tend to "believe" in my own experiences rather more than in other people's - though even then I try to be aware that my interpretation of the experience might be entirely wrong... a real illusion in fact.

Caroline! How dare you try and be honest! (I would have bought the scarab, too.) As for me, I'm just as shallow, vapid and flippant as I appear on my blog.

PS All that aside, it's an excellent post -- lots of food for thought.

Andrea - Ms Vapid... have you started a new blog then?

Wow! I wouldn't know where to begin - maybe I should.
I love "Oneness". It makes me feel a part of things - I'm exactly where I'm supposed to be.

Yes I have to agree with you, that when reading other peoples blogs it is hard to judge wether its the 'real'them writing it or the person they 'wish ' they were, or to be. Hmmm hard one that. My own motto - is to thy own self be true.Always stood me in good stead that one!

Joy Eliz - you are part of the things!

I have this theory that it's difficult for people to keep up a pretense, day after day. Even unconsciously, the real self slips out.

As for me, well, I have this fear of being 'found out'...that if I lie or make up something, I'll get found out, so I might as well be as truthful as possible.

When I say 'as truthful as possible' I mean, I write knowing that the internet is a public place, the whole world sees.

Guyana is a small place, and just to keep us safe from various elements out there, I avoid talking about certain things.

Gee, I just read your comment about the man who pretended to be a woman.

I tend to go by instinct and let that guide me. I wonder if anyone's fooled me and my instinct was sleeping!

GG - the man who turned out to be a woman wasn't so much pretending to be a woman at first as just hadn't bothered to mention that he was using his girlfriends email account... he'd then not bothered to correct me when I had assumed he was a woman... he then got into pretending and we had exchanged some emails that really were rather odd of him but he'd probably thought he was getting useful insights at the time... and as I said I wasn't at all bothered... I had been me the whole time and didn't mind that I'd been taken in by him. I was disappointed not to met him.

I suspect I attach less importance to what sex someone else is than they do... :-)