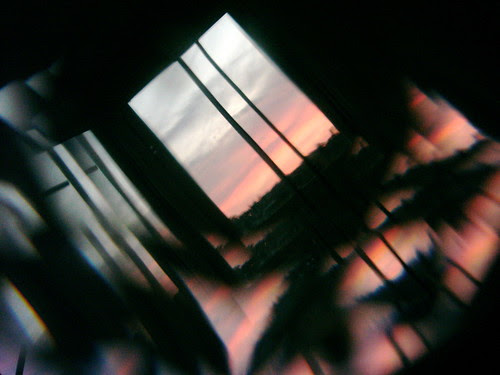 Yesterday I posted about doing affirmations the HK way. The HK ones tend to be goals which we are aiming towards though worded as though already present.

Today I'll do the affirmations Carla's way. The ones she's suggesting we pack into our Zen Luggage (she calls it something with a trademark attached so I'm sidestepping that name!) are about affirming where we are now. A very good idea. I've found in the past that one of the things that's sometimes caused me problems is a sort of feeling of having rejected myself in my attempts to make changes. Now I know that everything changes all the time so the point of aiming isn't to reject where we are starting from now but to get where we want to go and to enjoy the journey.

Last week I said I wasn't going to go public on my inner thoughts but having had a a few days to think about it I've decided I will. So first here are the lines I came up with in answer to last week's prompts:

In my stories I am swept along by fate, unable to find my voice, regain consciousness and lose weight

In my fears I am a dragon coming to get me.

In my past I was a knight fighting the dragon
But it was me I fought!

The first task this week is to make these images more literal. First I thought maybe I ought to confess to an aspect of literalness that won't be apparent to most of you. My previous husband's name was Knight, so I used to be Mrs Knight... and one of my favourite images to draw, paint etc. used to be dragons. Here is one I made when my name was Knight: 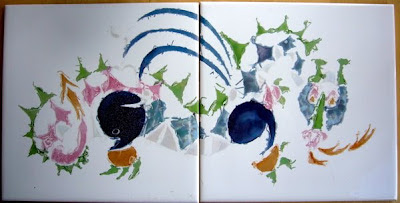 It was stenciled onto tiles and then fired which means I can date it to 1992 as that's when I was painting tiles. Just around the time I got ill with M.E. for the first time.

One of my key images with M.E. was that I was fighting my own body in someway... I had no idea when I wrote the poem that I'd make that connection here.

I'd got this far when I took a break and happened to pick up this book: 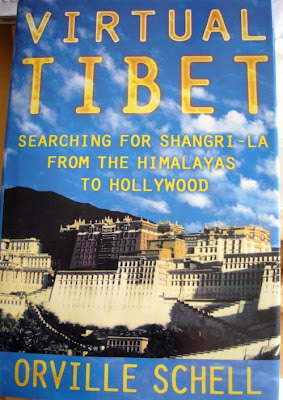 Its one I got ages ago from the Amnesty bookshop and have kept on meaning to return as I've struggled to read it. My bookmark is still only on page 18 despite another attempt spurred on by the recent dreadful happenings in Tibet.

I felt both a reluctance and curiosity to see if I could get a message from it now. I opened it at random to this page: 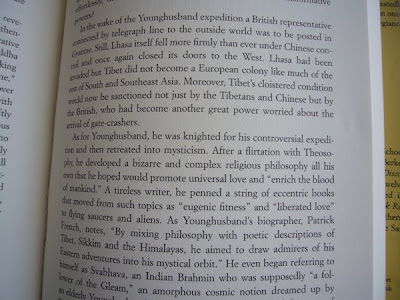 And my eyes were immediately drawn to the sentence:

As for Younghusband, he was knighted....

Well the husband of my youth, my "young husband", was indeed as I've just mentioned called Knight... but really I was the one who was "knighted" since I married him and became a knight. Then I looked at the opposite page and discovered that Younghusband had been some sort of British military type in Tibet but on his last day in Lhasa he had a mystic revelation in the mountains when he realised the divinity that is within everyone and following which he said he now considered no man an enemy. The wikipedia page on him fails to mention this revelation... sticking to a rather Christian line that is at odds with this page in Virtual Tibet, though it does mention that he killed many Tibetans in his campaign.

Now more curious about this book I looked at another random page and discovered that China has been bringing pressure to bear on American companies. In particular Hollywood over "Seven Years in Tibet" and Apple over the use of the image of the Dalai Lama in an advertising campaign, Think Different, which also featured Einstein and other luminaries.

I felt I needed a walk at this point so I went to the local shops. There in the Amnesty bookshop I got this great selection of books: 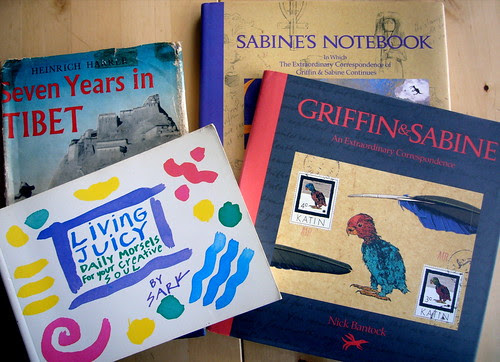 And look I actually found a copy of Seven Years in Tibet! Its old (1953) and falling to bits but quite readable. The other three books are much newer. Indeed the Nick Bantock books are like new. Those two are books I've long wanted having come across them on a trip to the US but costing more than I wanted to pay at the time... Today I got all four of these books for £7.30 and the joy of knowing that I'm reusing them and contributing to Amnesty all at once.

Thank you for sharing your first exercise, and thank you to for taking us on your thought-journey in this post. What do you make of all the synchronicities? I am so curious to see what literal expressions you derive from this exercise!

Carla - I had to stop writing where I did as I'm really not sure where they are taking me. But one thing is sure - this is a pause only - synchronicities tell me I'm doing something right, even if I've no idea what!

You are a veritable cornucopia of synchronicities, C. (Wasn't that pretentious!? :) I love reading about it, especiallly all the 'knight stuff'.

I love the every which way your writing takes my mind ;)

Andrea - pretentious? I hadn't thought it might be til you suggested it... there will no doubt be more knight stuff to come...

Anonymous - that's trying to follow the weird twistings and turnings of my mind I suppose... I hope you've got your map with you! If you have perhaps you could let me know where we are?

I Love Griffin and Sabine - And SARK is always uplifting:)