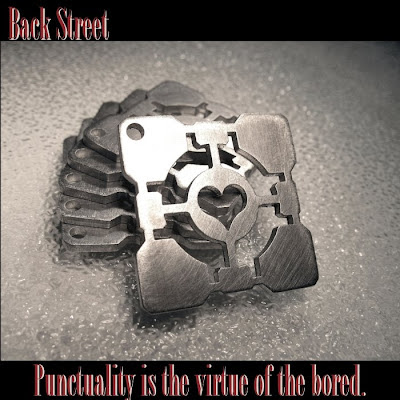 Band: Back Street from the 1932 film.
Title: Punctuality is the virtue of the bored.
(And yes I know in the original game it was just the last 4 words... I've changed the rules okay?)
Photo: "six more, already spoken for though..." by Don Solo.
This is my latest version of what began as the album meme. And yes I am still obsessed with it. But don't worry you only get to see a very few of the ones I make... though I treasure them all!

In the photo's description the photographer says "OK, so about month and a half later I have a couple more...." (his italics) so it seems like punctuality or lack of it is pertinent here. And this is all to do with some game called Portal which, because I've never heard of it, he seems to think I ought to "get off the internet. Seriously." What a sense of humour! It is apparently a "benevolent Weighted Companion Cube". In a photo of his original version of this object he says "I'm just a geek being a geek for other geeks.".

Well I seem to have been surrounded by geeks all my life, most of them haven't accepted me as a fellow geek though... for instance I was asked why I hung around the Maths Institute... the asker thought I was an arts student not a fellow mathematician... but of course being a geek companion has meant that non-geeks assume I am one.

Identity and especially identity via the groups one belongs too... ah... that always has been a tricky one for me. Anyway it inspired me to actually put something into my blog's "about me". I'd temporally deleted it some time ago... thinking I'd soon put something up and so months later I now have. ;-)

But I'm still struggling with group identity... I'm too influenced by other people when I'm in a group and as I value my own identity I'm having to refrain from joining in with lots of things... does that make sense to anyone else?

Anyway, this posting was meant to be about the "Internal Gestures" from "A Life of One's Own" by Marion Milner. She does mention that she finds them harder to do when other people are with her, so this solo, I mean solitude stuff is relevant. And she is also not assuming anyone else would find these specific gestures useful, but she is sharing the concept and giving her own examples as a way of writing about something she otherwise had no words to share.
If you already do one or more of these internal gestures you probably know what's meant, but if you don't its much harder to explain because these are really sensations, felt things. I'm a very gestural person so these are relevant to me.

In fact I've been surprised to realise that some people don't know how to shift their awareness to different parts of themselves. Actively putting my awareness into my feet is a very good, grounding thing. However unlike Marion Milner I'm not adept at putting my awareness outside of my body onto bits of furniture or to "stand" next to the orchestra... she mentions scaring herself sometimes whilst doing this... I've never found it scary to put my awareness into my feet but I can imagine it being scary to separate from one's body, especially in a crowd.

The nearest I've come to this sort of putting myself elsewhere is when doing journeys... either guided or free... but then I always attempt to do that in a really safe space, not at a concert!

Carla has just posted about "Creative Daydreaming" which is another way of journeying... some people have incredibly visual daydreams others have stories that unravel, or songs that sing themselves. I've had all sorts but what I would really like is a key, an "internal gesture", that guaranteed me this sort of experience.

A key would be nice, so would sleep - my head's over there right now but will return later when it's back here again :)

Anonymous - I know that feeling!

i read this yesterday and was trying to think of the other internal gestures i use. i definitely have used most of the ones she listed! of course, i don't really "think" about these gestures, so perhaps i'll just pay attention and see if i can describe some other ones.

the ones i use most often are bringing awareness to parts of my body (which she mentioned) and taking a breath. others, i'm not sure how to describe!

I'm back but wordage is now over there but my mouth is here Caroline :)

I'm not sure if I've ever found an 'internal' key, but I know if I'm doing something physical, such as walking, as she mentioned - or even doing dishes or some other repetitive task, my mind will go into a different zone, though I think my favorite way is to explore some everyday object by drawing it...
I'm not sure if I can describe this next bit properly, but I've been trying an idea out from Eckhart Tolle/Oprah, where I just sit outside for a length of time, in a sort of meditative state - being awares of natural things around me, while not naming them - more or less trying to experience it as a child who didn't know the names of things yet, and there have been some very interesting and rather blissful experiences...but not as often as I'd like - it's rather hard to turn that 'naming things' part of my brain off...
Though all of this may be irrelvant, as I'm not sure if I'm interpreting the state of mind you're trying experience correctly or not - it almost sounds as though the person is describing having out of body experiences sometimes, as well as 'being in the body' at other times...
Since I'm realizing I'm not sure exactly what state of mind I'm commenting on now, I'll stop babbling on, now :)

Leah - thanks - that taking a breath is a good one. Advice we've probably all heard but don't always act on!

I would love to hear about any others that you do find a way to describe.

Anonymous - your gestures seem to cover the whole world - amazing!

Tinker - that difficulty of naming things is I think the one that the idea of using descriptive words helps with - if your brain is insisting on butting and using words at all then assigning it the task of description helps open you up to seeing. I'd love to know if that helps!

And these are not all about going into the same state... or at least they might be but as the door one enters through tends to colour how we experience it its easier to describe the different keys and not worry about whether they are all leading to the same land.