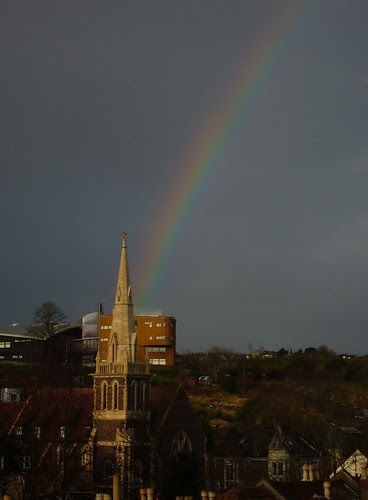 This morning we've had sun, grey clouds and briefly this rainbow.

I'd just been taking photos of the raindrops on the window of which this was the best: 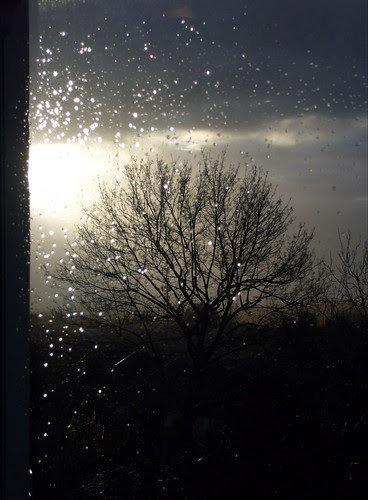 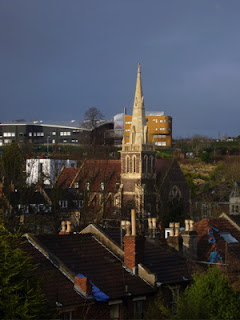 After that I'd taken a photo of the grey clouds behind the school a minute later the rainbow appeared. (See above).

In my previous post the rainbow colours under the window sill had "just appeared" there was no rain so I assume that it was a trick of the light in our double-glazing. There was no prism or crystal or other more obvious cause. I'd never seen this effect before and as its in the room that my computer is in and in which I paint I've spent quite a lot of time in here. And all too often staring at the windows!

And yes I am painting again - nothing to show yet, soon maybe. I'm hoping to get my collage and painting to work together. Today I'm hoping to suss printing onto tissue paper.

If I go quiet all of a sudden in the next few days it'll be because we're attempting to get rid of the second phone line, which Jim no longer needs, but through which we've also been getting broadband. He's asked them to enable it on our remaining line and they've warned us that it may take up to a week for us to be re-connected. No idea why - its the same service provider and all we need is for the exchange to turn it off on one line and on, on the other. They've said that there will be no charge but I doubt we'll get a refund for the time we're off-line.

I've not managed such a brilliant night's sleep again but I have been having some good dreams instead! Also I've had enough energy not to need to nap so I may be hoping for too much of a good thing!

One of the things I've yet to manage is to stop myself waking up to get some urgent message or other from my subconscious. That's okay if its a need to go to the loo but a bit annoying when its a reminder to do something that will have to wait until morning. I used to write them all down but that seemed to encourage more... however last night's were rather useful. I'd mentioned that I was planning to use the "auto-analysis" phase to ask what plans I'd made. Well they all bubbled up last night as did some associated "promises" to myself.

For instance, I seemed to have promised myself never again to be with a man that had some of the characteristics of one of my least happy affairs. One of these promises was to avoid anyone who earned less than me as it always seemed to aggravate that man's ego too much when his woman was earning more than him. As Jim has just stopped working for the moment and we'll be living on my pension and our savings it was really important that I clear this one.

Another example was of a plan to to avoid self-employment. This derived from my father who was self-employed and who worked from 8 am in the morning until 10 pm at night every day of the year except Christmas. However one of our current plans for our future would involve us being self-employed, and I don't intend to put anything like those hours in! So I've attempted to clear both the plan and the assumption that self-employment is so all consuming.

The general pattern for finding these old out-of-date promises and plans seemed to be to identify the person, place or event that had inspired them, then to find the actual promise or plan. Finally to make sure that my subconscious had agreed that this was no longer part of my motivation and that it had really been cleared.

ooo -- that second shot is so moody! Interesting nocturnal activities, Caroline. I woke up today convinced I was going back to teaching in my dream, then just thankful that I didn't have to go through that whole getting-out-the-door with kids rotuine in the morning!

I'll have to wait for another massive storm before seeing another rainbow :) Being self-employed, our family can see a rainbow for when we finally get our 'every four years' holiday next Christmas! That is, more than just boxing day off and half Sundays ...

Andrea - thanks - dreams often seem to mix up now and then a lot don't they?

Lovely rainbows - my grandmother taught me that they represented a promise from God (that the world wouldn't be destroyed by flooding again) - and in a post about promises to yourself - that's something I've been thinking about myself, lately.
The fox is beautiful, too - though it does seem rather odd for him to be so openly out and about in daylight. Perhaps he's sleeping better at night now, too? :-)