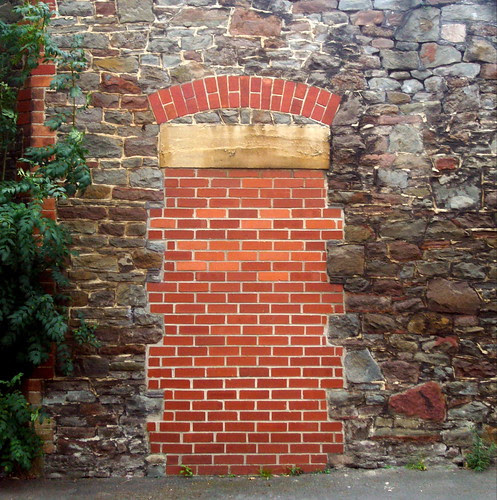 Sorry my blog has been closed for so long. I really wasn't expecting to be so anti-social for all these months.

Jim and I have always planned to live in Cornwall sometime. We got married there seven years ago as a way of marking this. We've decided that 2008 is the year to do this. Jim's given up his job and we have some things we want to do to this house before we sell it. We've been living here since '96 and although we have done quite a lot there are a few more things to do before we call it finished.

Then we'll cross our fingers that someone wants to buy it despite the gloom in the papers about the property market, after which we'll be able to move to Cornwall and start the next phase of our lives there.
Posted by Caroline at 1/06/2008 07:05:00 pm

Email ThisBlogThis!Share to TwitterShare to FacebookShare to Pinterest
Labels: review

Welcome back, Caroline! It's so lovely to see you back on the page again.
Your photo art of a walled doorway resonates with me in some way that's difficult for me to describe.
Wishing you and Jim the very best in your upcoming Cornwall adventures!~XOXO

Hi, Caroline,
Lovely to see the blog coming back to life. (Great photo, by the way). I wish you and Jim every good thing in 2008 - including Cornwall. I have to say, having you come over for that workshop was one of my highlights in 2007, too. That whole weekend with you was so great! Let's do it again sometime!

Tinker - thank you for your warm welcome back. I hope you find a chink in the brickwork of your walled in doorway.

Joy Eliz - thank you - I was looking at the Hanged Woman that you did for me today!

Greenishlady - I look forward to it - and if you want to come to Bristol for a visit you'd better pop over soon!

Cream - thank you. That's a lot more encouraging than the window cleaner who on hearing said "oh the graveyard!"

Big welcome back to blogsville Caro, and a splendid new year to you. I'm a big fan of Cornwall - made it down there four times so far - any idea which bit?

Welcome back Caroline!!! (my art blog still isn't back) OH I have wings now ;)

Hello John - we've not yet got a definite preference - its going to be a matter of where we can afford what we want as much as anything... prices in Cornwall are ridiculously high especially given their average wage...

Anonymous - your wings become you!

Are you ever going to be restarting your art blog?

Hhehee thank you :) Have tons of posts for all three blogs but not enough time .... one day the art blog will have its turn again :)I'm a twit now!