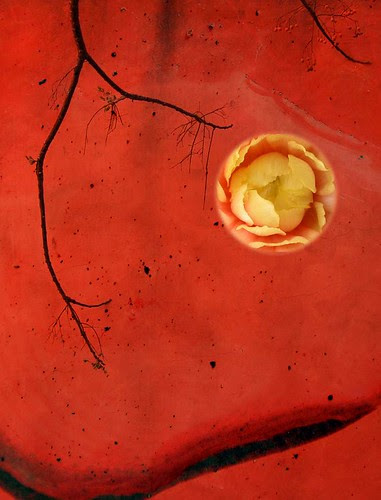 Red Face by Caroline - This is a remix of the following images: Water Droplet by Editor B , caducity by /baboon , DSCN2023 by ramikey
A few days ago I realised that I was feeling a bit stale - I'd been so happy making SoulCollage® cards using all this digital remixing that I hadn't noticed the need to use the same skills for different purposes. I wasn't conscious that I'd started to search for other ways to express myself but had, looking back, been doing so.

I'd made a few SoulCollage cards for other people: Reluctant Nomad (who posted it on his blog), this one and this one for someone else. Over the weekend I also did a collage for Andrea from her own work.

Then yesterday I twigged that I wanted to make something that was just for fun. I did this: 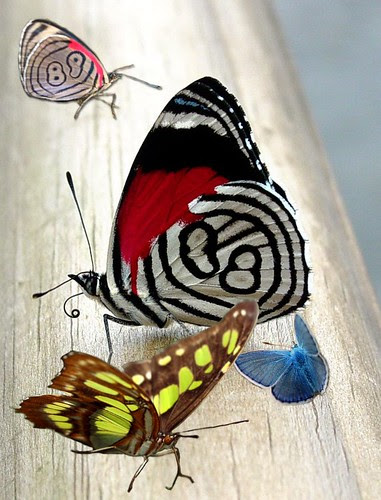 (88-91 by Caroline - Remix of butterflies with appropriate cc licenses: 88 by Rigmarole , 89 Butterfly on the Road by ARKNTINA, zafiro by dsevilla, Malachite by code poet )

It started by noticing that there was a butterfly that appeared to be called 88, presumably because of its markings, then that lead to an 89... so of course I looked for remixable butterflies with other numbers too and, flickr provided a couple - though not ones with numerical markings to match.

And then I posted yesterday and did lots of illustrations just for that one posting...

Somehow doing this all just for fun gave me the strength to complete a rather long posting that I'd been working on for my card blog - it needed 12 images uploading to flickr - all the attributions putting on and of course visiting all the providers of those images to say thank you to them and to let them see, if they were interested, what had become of their photos. As well as the writing for the blog posting of course...

And having done all this one of the people whose photos I'd used commented on flickr "You're welcome. :) Was this for some group or project or just for fun?" - a good question! I'm sure it had started out as fun but having to actually finish it became more like hard work and that needed something else as fun to sweeten the way.

The image at the top of this posting was done today - just for fun!

Love the butterflys (and numbers - who knew?), but am amazed by the way my body responds to your top photo - must be the red and yellow. Amazing.

I hope the effect is good - Its quickly got itself up to 4 favourites on flickr which is a lot in my small part of flickr!

Number 89 Squadron! Beautiful butterflies, Caro.
My belief is that we are all connected in some mysterious way and every so often "synchronicity" gives us a tiny glimpse of that connection.

I'm visiting from Andrea's blog. I love these, especially the top image. I should try mixing it up some more.

Cream - we are all connected one way or another - its just not always clear to see how - thanks for your part in that particular synch!

Cynthia - hello - welcome! I think a little mixing up is lots of fun.

Wonderful! I wonder if this is an example of chaos and fractals at work - or just the Universe (and you!) having fun? I do think by having fun with whatever I'm doing, seems to be the best way for me to get anything done. The fun gets even better when some synchronicity gets mixed in.
At any rate, glad you had fun - the result is fun to see!

Synchronicity seems still to be one of those core focuses for me. I've always been good at making sense out of what others might see as random - but you see if you intend something to be random I think it will be.

Love the butterflies, especially with the numbers!

Oooops, how'd I miss these Caroline? They're both great, but I really dig that top "eye" one!!