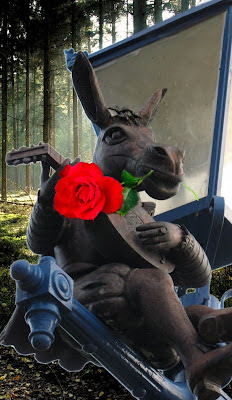 A dream is just a dream... by Caroline with a Creative Commons License that allows non-commercial use and further remixing provided all attributions are given and a similar license is given on new images. Images used in this remix are all from flickr with appropriate CC licenses:
translated by estherase
untitled by josef.stuefer
A Rosa e o Cimento by Fábio Pinheiro
I am inspired by dreams and by synchroncities. The last two days have been full of these. I turn my inspirations into either pictures or words (and sometimes blog postings) and life.

Yesterday I had a dream which I wrote up (before going back to sleep early in the morning) - I called the first part of it Shaman's Cabinet, the second part Charlatan and the third, seemingly unrelated part, Scissors - I mentioned the scissors part yesterday.

In Shaman's Cabinet there was something like a sedan chair into which a single person fitted. Someone I know was inside it. There were all sorts of weird things happening - objects flying around strangely. The Shaman whose cabinet it was said that at first this used to worry him but now he knew it just did this with some people. Showed they had some sort of power... not one he had. I wondered what would happen if I went in... but the dream moved on instead to...

I was talking to a traveling shaman, he was sitting on a stool and had his pack at his feet. He was casting aspersions at the other shamans. I tell him about the cabinet and how all these objects were flying around whilst there was someone inside. He scoffed at it. He made out that we had been taken in by a charlatan. I accuse him of being one himself.


I found two images that others had made to illustrate my dream diary - I didn't know I'd be blogging them or I might have been more inventive! One was just a sedan chair - for the other I found this image which seemed to express all the energy of the charlatan without putting in the pack at his feet: 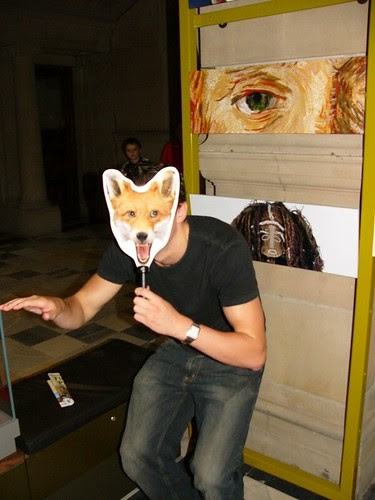 This photo was uploaded to flickr by Fearless Tall Dude Killer and has a creative commons license requiring non-commercial use and the giving of an attribution.

Today I was at a lunch at a friend's - I'd taken the trifle I'd made yesterday as our contribution. The first new person I met there was an engaging chap and we got talking. Then he started going on, out of nowhere, about all these people who call themselves shamans in the West who aren't really. I noticed that he was sitting on a stool with a bag at his feet (the one I'd brought the trifle in). So of course I then told him about my dream... he accused me of making up the whole story... but then he confessed that he does love to play the charlatan...

The next new person I met was a charming Irish woman - there seems to be an Irish thread running through some of the rest of this...

Usually my dreams do inspire me to make my own art and not just borrow someone else's intact - so I suspect there is something going on here about how far collage needs to change an image before it becomes mine. This was clearly an extreme where it was not collage but pure borrowing. The question in my mind is how much difference is needed to make it into a remix... all the one's I've called remixes have had at least 3 pictures as part of them.

So here my dream inspired the borrowing of an image, a strange lunchtime conversation and then the musing over when a collage is a collage.

Yesterday's big synchronicity led to discovering one that I had not been aware of at the time, I'd have known if only I'd followed my intuition at the time.

In February I e-mailed the inventor of Soul Collage - mostly because I'd been unable to see a particular image on her website. A couple of days later, Feb 13th 2007, I did the first of my remix cards. I only posted it on flickr, neither here nor my card blog, because it was called "Birthday Card" and I thought it would be fun to use it to celebrate someone's birthday. 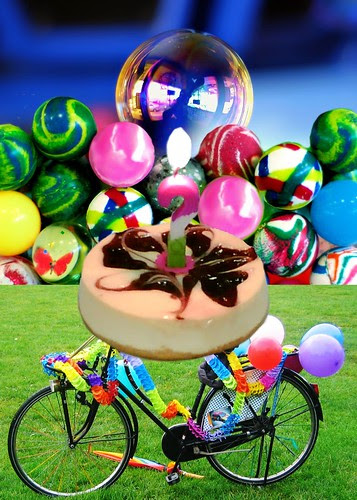 Birthday Card by Caroline with a Creative Commons License that allows non-commercial use and further remixing provided all attributions are given and a similar license is given on new images. Images used in this remix are all from flickr with appropriate CC licenses:
Spitzgogo_CHEN (Nokia 6230i) for the Cake
Miss Loisy for the Bike
Jeff Kubina for the Balls
brokenchopstick for the Bubble
This card was made on that particular day because I'd just found out that it was the birthday of one of Jim's work colleagues whom I'd met at Christmas and liked. I'd been intending to make such a card sometime for my set but when I realised if I did it immediately and with creative commons images I'd be able to send it to her straight away. So this was the occasion which inspired me to try making images using those findable through flickr's creative commons search. It was really easy to find the images - they just turned up - it was easy - in fact a piece of cake!

By the way the woman for whom I made this card happens to be Irish.

I also thought I'd send this card to Seena for her gallery, but before I did on Feb 14th I got a request for a card to go in a newsletter, a card from an "other suit" and as this one was the only "other suit" card I felt happy about sending to a newsletter I sent it there instead. (Its in my celebrations suit)

Yesterday was St Patrick's Day and I connected up with greenishlady (who lives in Northern Ireland) through her posting of her card for Seena (which I blogged about yesterday). She mentioned that it was done for Seena's 75th birthday which was in February. Today I found out from her that Seena's birthday was on Feb 15th. If only I had followed my intuition at the time!

Greenishlady has also mentioned that if I can get there I could attend one of her Soul Collage days and experiment with real scissors. Its a wonderful suggestion and I'm hoping I'll be able to go.

I just popped over to soulcollage.com using the link from my card blog which brings up a reading. I was looking for a link to the gallery. The reading came up with one of greenishlady's cards. And guess what - its the only card from her on the site and the first time I've seen it! Oh all these synchronicities - I love it!

The image that I made for this posting at the top was inspired by hearing Radio 4's "The Write Stuff" where author of the week and subject for pastiche is William Shakespeare.

So back to the topic of inspiration... I get inspired by all these nudges... they don't just impact my art work but my whole life.

Ooh, so much food for thought here! Love the synchronicity...that's always so exciting to see. Wow!

Christ, this is pretty weird. But I'm glad you found my photo of my mate arsing about so inspiring. God knows how you found it.

Mardougrrl - thank you - I'm hoping for a quieter day today - I need to catch my breath!

Pete - thanks for coming over to see what became of your photo! I was searching under "charlatan" and once I'd done enough -band, -music etc to get rid of The Charlatans this came out!

Wow - now those are quite a lot of synchronicities in such a short time! Though they're wonderful to receive, getting so many in such a short time would be pretty breathtaking. Hope you find some time to just breathe and absorb/process them all. Sounds like you had lots to be inspired by!

Terri the tinker - so do I! I'm still left wondering the full implications... not that thinking is going to be much use I suspect... something will emerge sometime!

thanks Skyelarke - are you from Skye?