Sunday Scribblings is up to 50 this week and I've not responded to one in ages. I was delighted to see such a great prompt and will celebrate their fiftieth by writing a story... some of which is true... but I'll leave it up to you to decide which parts those might be.

It didn't take much of this before the part of her that was used to being outdoors and free all the time decided she'd had enough. This part, who called herself, Ariadna, said "Knickers to this" - and up and left, leaving Henna behind.

Henna who didn't even know that "knickers", or indeed any other word, could be used like this, plodded on with her school work; she grew strong but rather placid. She went to college, doing well academically - probably far better than she would if she'd still had Ariadna with her.

Her life was quite normal, she worked until she met a man called Valentine; they married and settled down. And that could have been that. 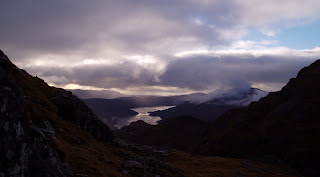 Meanwhile Ariadna was off as fast as the wind could carry her. She played and frolicked in the breeze - laughing with the trees and tickling the birds. She was soon completely lost and unable to find her way home. She sat on mountain tops and sighed with the breeze - oh what a joy it was to be alive and free!

At first being lost did not worry her - she knew Henna would be going to school and doing exactly what she was told - not something Ariadna had any intention of ever doing. Time passed and after over forty years of this disembodied life Ariadna was longing to feel what it was like to actually have a body again. Ariadna longed for Henna.

And Henna, though she didn't remember Ariadna at all, responded to this longing and began to miss her too.

Why was her life so staid, so placid, so normal? Had she really been born for this? Everyone said she was going through a mid-life crisis but then they didn't know about Ariadna.

Henna started to experiment with alternative healing. She saw all manner of therapists and counselors - anyone who promised increased wholeness. She longed to feel complete. She met much sympathy and many lovely people yet nothing helped.

Valentine watched and began to worry. He loved Henna but could tell something was wrong. Then he began to have strange dreams. 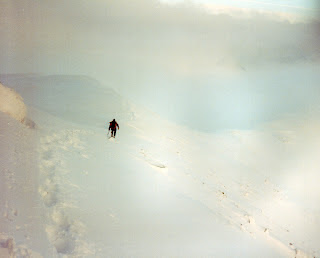 He spent all night searching. He didn't know what or who he was looking for, yet he searched. He trudged through snow fields, he walked up and down mountains and explored all the lonely places he had ever heard of.

Meanwhile Henna had at last found someone who could tell her what was wrong. A wise woman explained that she had lost part of her soul but all her attempts to bring it back failed.

A diagnosis but no cure.

Now Henna also began to have dreams. She was always on a high mountain - on top of the world, above everything else and happy to be there. She told Valentine she thought maybe her lost soul fragment was on Everest.

He told her that he kept on dreaming that he was climbing mountains and silently he vowed to search Everest itself. 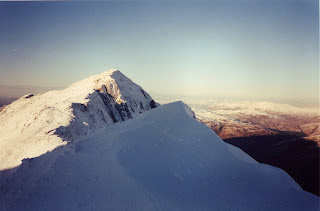 In order to incubate dreams of Everest he read all he could on it and about all the expeditions that had succeeded or failed, he knew the routes well. On his holidays he walked in Scotland, but in his dreams he was in Nepal.

One night he was sure he'd almost got to the summit of Everest but they had to turn back because of the poor visibility. He and his friends descended and debated on whether to stay at the Youth Hostel that was now conveniently placed for final ascents. They decided it was too dangerous stay - every minute at that altitude you are dying much faster than normal. 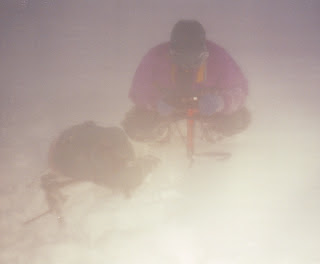 Next day Henna asked if he'd been to Everest recently and he related his dream.

He mentioned both the mist and the youth hostel.

Later in the day whilst sorting out his photographs he pointed out Ben Nevis.

He called it the whale-backed mountain.

"It usually has its own little cloud above it but here you can see it out of the mist." 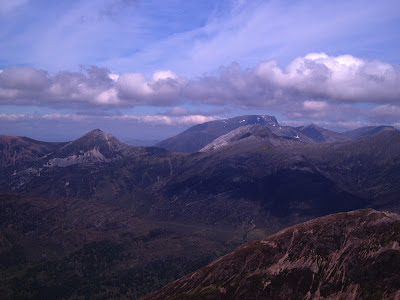 "It's the highest mountain in Scotland isn't it?" asked Henna.

"In the whole of Britain - you could call it the Everest of the UK."

"Is there a youth hostel on Ben Nevis?"

They looked at each other sure that at last the problem had been solved. How would someone who had only spent one hour in school know the difference between Everest and Ben Nevis?

That night he visited Ben Nevis. He found Ariadna and brought her back safely to Bristol. When he woke up he saw that his wife was changed. So subtle that no-one else would be able to tell but in his mind he re-named her "Whole Woman" and thought he'd better make sure he was ready for her to start joining him on his mountain climbs. 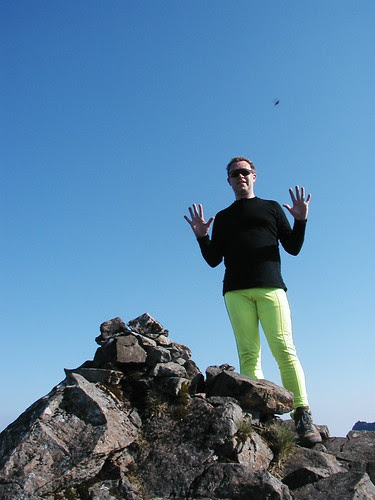 All the photographs used here come from my husband, Jim's, walks in Scotland. This year he is hoping to finish "bagging the Munros" which means he will have climbed all the mountains in Scotland over 3000 ft. There are 279 Munros and he has 10 left to go. 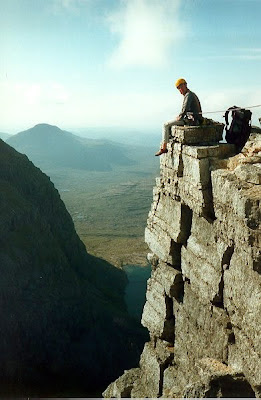 Wonderful, magical scribblings, Caroline! It feels as though it all should be true, whether they really are or not - if tha makes any sense. Congrats to Jim on all his climbing accomplishments.

I loved your story Caroline! Dad STILL climbs mountains in ways different from most, but not Valentine :) Excellent photographs!

Oh, I loved this story...I loved that Henna found her other, wilder half. I'm sure they'll both be happier now. :)

Terri - thank you - we'll see if I get up any Munros this year - so far I've not been well enough to go with Jim up any - I'm hoping that I'll at least manage his last!

Anonymous - thank you - glad to hear he is still active and enjoying the mountains in his own special way! I'll tell Jim you liked his photos (some of which were taken by friends but most of which were his own).

Mardougrrl - thank you - I'm sure they will be happier now they've found each other - I'm wondering if Henna will be able to be fit enough to keep up! Lets wish it so!

Oh and Terri I forgot to say thank you for your congratulations to Jim - I'm in awe of his perseverance!

Yes, congratulations to Jim , what an acheivement. Great photographs too.

Davem - thank you - I know he'll appreciate the congratulations and appreciation!

Person whose commented I deleted - if you are not a spammer please try again without links to websites.

Caroline--Thanks for your encouragement on my blog. I love this story! I'm thinking maybe I'll spend some time today imagining where my other part might be--I'm sure she scurried away as fast as she could when my mom told me (at five years old!) that if people knew what I was really like, they wouldn't like me...
I'm definitely going to spend time today visualizing her.

A wilder freer part of me...

amazing story caroline! I just love the imagery and the way it made me feel inside. I think we can all relate to the journey of finding ones self. Thanks for your beauty.

Karen - I'm sure she'll be happy to return now!

Holly - thanks - I'm glad you could relate to it!